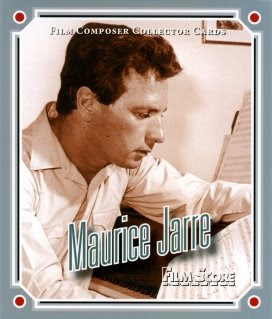 The composer of rich and powerful scores for epics like Lawrence of Arabia, Doctor Zhivago, Grand Prix(*), the Jesus of Nazareth miniseries and Mad Max Beyond Thunderdome has died. Jarre was 84. When he accepted an honorary Golden Bear for lifetime achievement at the Berlin Film Festival in February, he was confined to a wheelchair and looked very frail.

(*) Besides the awesome racing sequences and Jarre's energetic, if a bit repetitive, score, another highlight of Grand Prix is the eye candy--Françoise Hardy and Jessica Walter. Lucille Bluth was quite a hottie back then.

Though he dabbled in the small screen (Nazareth, Shogun), Jarre told interviewer James Fitzpatrick he didn't enjoy writing TV scores because "everything is too hurried with poor sound and nobody caring about wrong notes." Monsieur Jarre, if only you were still alive because I would have liked you to meet Michael Giacchino, Bear McCreary and Jeff Richmond.

Jarre's most lasting collaborations were with David Lean (Arabia, Zhivago), Peter Weir (Witness, Dead Poets Society) and John Frankenheimer (Grand Prix, The Train). The father of New Age musician Jean Michel Jarre and Glory screenwriter Kevin Jarre told Film Score Monthly he admired Mozart and his music because "The harmony is so perfect, and the orchestration is so simple and natural. You listen to Mozart and you get a great lesson in humility. To me his music is perfect."

So were many of Jarre's film scores.
Posted by J. John Aquino at 9:00 PM