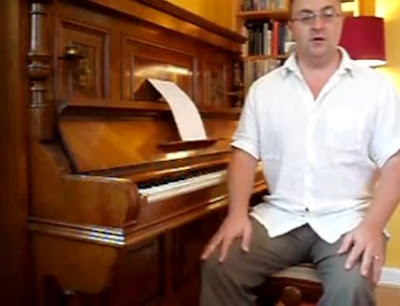 British composer and piano teacher Richard Harris will give a prize to the first person who can name all 100 film and TV themes that he plays in less than 10 minutes during a video he posted on YouTube. It looks like no one has been able to identify them all so far.

I was only able to identify 74 73 75 82 83 of the 100 themes. It's that difficult. Three of the tunes I couldn't identify are most likely from chick flicks that not even Jack Bauer could force me to watch if he shot me in the leg.

MARCH 11, 2009 UPDATE: I listened to Richard's medley several more times and correctly guessed a few more themes, so as of this writing, I'm now in the lead with 82 right. Richard wrote, "I'm very impressed that you got a couple of favourites that I deliberately threw in to make it a tiny bit harder - [COMPOSER'S NAME DELETED]'s superb score for [MOVIE TITLE DELETED], for instance... no-one else has come close to getting that!"