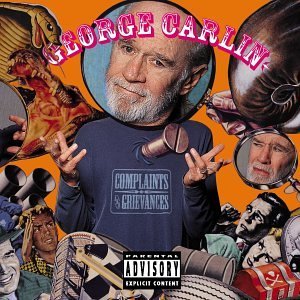 I was so busy trying to come up with intentionally lousy cop movie dialogue (for a fake movie trailer that's part of a graphic novel script I'm working on) that I didn't learn about the following sad news until late at night.

The first thing I thought to myself after reading the news were seven certain words.

I'm more of a fan of Carlin's later, angrier albums like You Are All Diseased and Complaints and Grievances than the breakthrough routines from his earlier hippie period. Some longtime Carlin fans find his later period to be one-note or problematic, but several of my personal favorite Carlin routines, like the anti-House of Blues rant, emerged from this later era ("If white people are gonna burn down black churches, then black people oughta burn down the House of Blues"). (I hate to admit it, but prior to his '90s and '00s stand-up albums, my first exposure to Carlin was his thankless role as a Time Lord a time traveler from the future in Bill & Ted's Excellent Adventure.)

As a tribute to this brilliant comedian, all Morning Becomes Dyspeptic episodes that feature excerpts from Carlin's albums will be streamed all week long (except on Friday, for complicated reasons that have to do with the MBD announcer's prerecorded outro on Friday editions). MBD airs every weekday at 1am and 8am on the Fistful of Soundtracks channel.

And unlike my old college radio show where I played excerpts from my favorite comedy albums in between hip-hop breaks--but the station's daytime airplay rules required me to edit out all the comics' profanity--all of Carlin's routines during MBD are uncensored. Just as Carlin would have wanted.
Posted by J. John Aquino at 1:39 AM 1 comment:

Yeah, I couldn't believe it either. Michael started working for the Others, or NAMBLA.
Posted by J. John Aquino at 4:14 AM No comments: 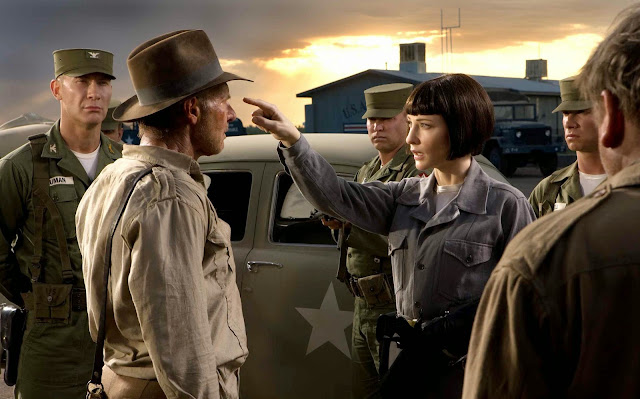 "Screenwriter David Koepp looked at all the film's previous drafts, and kept what he felt were good ideas. He tried not to make his work a 'fan script,' avoiding any trivial references to the previous films. He noted that the story would have to acknowledge Ford/Jones's age, and also aimed for the mix of comedy and adventure from the first film, trying to make it less dark than the second film and yet less comic than the third film." [IMDb]

I saw Indiana Jones and the Kingdom of the Crystal Skull on opening day, but I kept my thoughts about the movie to myself until now. The Crystal Skull screenplay sounded great on paper. So why doesn't most of the movie live up to the above IMDb description of what Koepp was intending to do?

From the opening credits to the all-practical, CGI-free motorcycle chase, Crystal Skull holds promise. It acknowledges Dr. Jones' age, and there are some clever, witty touches that must have been Spielberg's ideas: the suburban neighborhood that's revealed to be a bomb testing site, Indy's anxiety about turning into an anachronism, which is reflected in the McCarthyism references and the film's only great CGI-created image--Indy gazing up at the mushroom cloud--and finally, a brief diner brawl straight out of a '50s B-movie. Spielberg's current favorite cinematographer Janusz Kaminski, filling in for a retired and now-blind Douglas Slocombe, is even faithful to the legendary Slocombe's bold, crisp pre-CGI cinematography from the previous Indy installments. But then the film moves to the jungle and lets the fakey CGI take over, allowing Kaminski to resume his trademark washed-out color schemes from later Spielberg films like Minority Report and War of the Worlds. The washed-out cinematography works for those more somber films but not for an Indy adventure. All it does is worsen the artificial, soundstagey look of this installment.

Crystal Skull goes downhill once Indy starts to deliver tedious exposition about the skulls to his new sidekick Mutt inside the mental asylum. My eyes glazed over like they do whenever I struggle through reading the opening scroll of The Phantom Menace. From there, the film abandons much of what was wonderfully established in the first half, particularly the references to the Cold War era and Indy's age. If it weren't for the 1957 setting, the rest of the movie could be set in 1987, for all I care. Indy, who utters a certain Star Wars catchphrase for the first and hopefully last time in the series, turns into an infallible superman (this is where the hand of Raiders co-writer Lawrence Kasdan is sorely missed--think of the self-deprecating lines he could have given to this older, frailer Indy). A potentially exciting sword duel between Mutt and Natasha Fatale 2.0 that was obviously shot against a green screen devolves into a rehash of the similarly green-screened light saber fights from the last two Star Wars prequels. The action is disrupted by a lame, overly cutesy Temple of Doom-ish interlude involving a Tarzan-like Mutt and monkeys with greaser hairdos. It's all evidence that Lucas' hand dominated the film's second half.

The best part of the second half is the too-brief interplay between Harrison Ford and his Raiders leading lady Karen Allen. "I don't know how Allen and Ford feel about each other in real life, but boy do they look thrilled to be back together in the movie. At any rate, Indy and Marion are clearly thrilled... It's the rejuvenating moment we've been waiting for and then...nothing comes of it," notes blogger Lance Mannion, who effectively sums up the merits and weaknesses of Crystal Skull in his post.

One of the gazillion Indy clones that have emerged since Raiders better captured the spirit of that first Indy installment than the current real thing. After he co-wrote Last Crusade, the late Jeffrey Boam went on to co-create The Adventures of Brisco County, Jr. with Lost showrunner Carlton Cuse. That cult show--a winning mash-up of Boam's own Indy sequel and the '60s Wild, Wild West--integrated extraterrestrial-related intrigue into a period setting more entertainingly than Crystal Skull does.