In Ghost Protocol, the gadgets turn into the Mission: Impossible team's worst enemy

I have a theory that the Mission: Impossible movies got better once Tom Cruise stopped being touchy about his short stature and allowed his character to be put in situations that emphasized how short he actually is. (It took this long for Cruise to become slightly less vain, which is so unlike Agents of S.H.I.E.L.D. star Clark Gregg, who has awesomely never given a shit about sharing the screen with Marvel Cinematic Universe actresses who tower over him, whether that actress is Gwyneth Paltrow or Mallory Jansen. On the first day on the S.H.I.E.L.D. set, Gregg, a veteran of so many David Mamet projects, must have said something Mametian like "Fuck these fucking apple boxes you want me to stand on.")

That creative resurgence for the Impossible movie franchise (Ghost Protocol and Rogue Nation turned out to be the best Impossible movies since the first one) began right at the start of Ghost Protocol, when Cruise was surrounded by prison thugs who were a foot taller than him, and the creative resurgence continued when Cruise, for the first time ever in the series, sighed and rolled his eyes like a too-old-for-this-shit, Rockford Files-era James Garner while getting knocked on his ass by an even taller enemy agent in Rogue Nation's terrific opera house assassination attempt sequence. That's another thing about the weird late-period resurgence of the Impossible movie franchise (which will come out with a sixth installment next year): the addition of more humor to these movies has resulted in Ethan Hunt becoming a slightly more likable and relatable protagonist, except the humor never feels forced or overly campy.

"Light the Fuse," the opening title theme Michael Giacchino, Ghost Protocol's composer, arranged for the fourth Impossible movie, is a stunning symphonic reinterpretation of Lalo Schifrin's main title theme from the '60s Impossible. The extra spit and polish Giacchino brought to an old (and kind of overplayed) Schifrin tune are why I chose "Light the Fuse" as the very first track for "Incognito I," the first of three mixes of spy movie/TV show score cues I assembled for the AFOS Mixcloud page. The oldest score cue during the three mixes is John Barry's Ipcress File main title theme from 1965, while the newest score cues during the mixes are from the Epix espionage drama Berlin Station and xXx: Return of Xander Cage. Below these three mixes is a repost of my July 30, 2015 discussion of both Giacchino's score from Ghost Protocol and the Ghost Protocol movie itself, a series-revitalizing installment that's on a par with what Fast Five did really late in the game as a creative boost to the Fast and the Furious franchise.

I wasn't alive when the original Mission: Impossible first aired on CBS, and I didn't watch any of the Mission: Impossible reruns until I saw FX's badly butchered versions of them back when the future home of Vic Mackey and SAMCRO started out as a low-rent Nick at Nite, so I don't have an attachment to Jim Phelps like I do to other characters from shows I'm much more fond of, like, say, Yemana from Barney Miller or anybody from the Greendale gang who's not Pierce. When Brian De Palma's 1996 Mission: Impossible reboot picked Jon Voight to take over the Peter Graves role of Phelps, the cool-headed (and rather bland) leader of the Impossible Missions Force and the hero of both the '60s and '80s versions of the show, and the movie reimagined Phelps as a traitor who had his fellow IMF agents killed, I didn't hiss "Blasphemy!" at the screen or angrily storm out of the theater in the middle of the feature presentation like Graves' old Mission: Impossible co-star Greg Morris did when he watched De Palma's movie. I actually dug the shocking plot twist.

Action film reviewer Outlaw Vern perfectly described why the twist remains an intriguing one in his recent reassessment of De Palma's Mission: Impossible. A master of paranoid thrillers who proved to be the perfect filmmaker to revive and re-energize Mission: Impossible for these post-Cold War times, De Palma "doesn't look fawningly at the cloak and dagger Cold War fun of the ['60s] series... Using the original show's hero as the villain is not only a surprising plot twist, it's a statement." Vern added, "Back then spy shit was fun and glamorous, now we're more aware of the messes it causes, and the consequences of training people with deadly skills and then running out of things for them to do. The guy that was the hero back then is now willing to betray everyone because he's not getting paid enough. Times are tough."

While I found the first Mission: Impossible movie that Tom Cruise both starred in and co-produced to be genuinely thrilling and clever--the beauty of that classic Langley break-in sequence is mostly due to its use of silence, which was De Palma's way of critiquing the noisy storytelling of most summer blockbusters--the villainization of Phelps, which actually made Phelps slightly more interesting as a character, wasn't what bugged me about the movie. What bugged me was Cruise's de-emphasis on teamwork in the movie's third act so that his Ethan Hunt character saved the day on his own and everyone else on Hunt's makeshift team was ancillary. The emphasis on a team of specialists from different fields was what made both the '60s and '80s incarnations of Mission: Impossible stand out from other spy shows, besides the enticing concept of what was essentially a one-hour heist movie every week. If you're going to revive Mission: Impossible on the big screen, it ought to be the espionage equivalent of Seven Samurai or Ocean's Eleven like the old show was, or else why call it Mission: Impossible? Without an ensemble, it's nothing more than 007 as a two-hour shampoo commercial--which was basically what John Woo's abysmal Mission: Impossible II was.

Read more after the jump>>
Posted by J. John Aquino at 2:35 AM No comments:

"Brokedown Merry-Go-Round" Show of the Week: Rick and Morty, "The Rickshank Rickdemption" 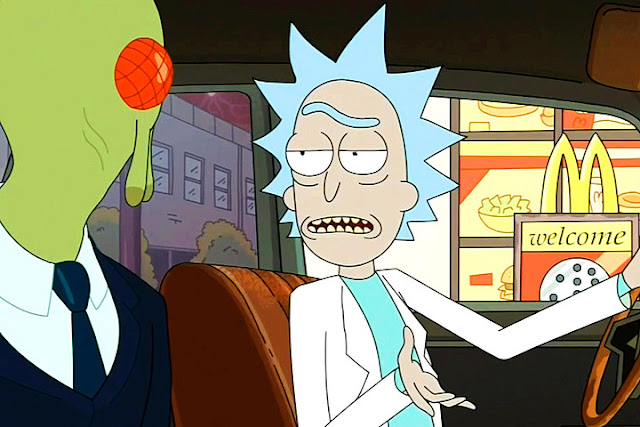 This is the fourth of 12 or 13 all-new blog posts that are being posted on a monthly basis until this blog's final post in December 2017. Occasionally on Friday, I discuss the week's best first-run animated series episode I saw. It's the "Brokedown Merry-Go-Round" Show of the Week. Stream "Brokedown Merry-Go-Round," my one-hour mix of original score tracks from animated shows or movies, right now.

If the last few years saw the rise of the surprise album release--the likes of Beyoncé and Drake have rewritten the rules of the music industry by dropping albums right and left without any warning--then Adult Swim is apparently taking a cue from Queen Bey and Drizzy by trying to bring about the rise of the surprise TV show episode premiere. They did it before when, without much fanfare, they debuted on Instagram the complete "Rixty Minutes" episode of Rick and Morty a few days before its broadcast premiere.

This April Fools Day, Adult Swim did it again. Without posting some sort of press release or promotional tweet in advance, Adult Swim's staff pretended to do their annual April Fools prank (three of those past pranks were simply broadcasts of The Room), but they used the appearance of a prank as a Trojan horse to show all of "The Rickshank Rickdemption"--the Rick and Morty third-season premiere in which an incarcerated Rick comes up with a very sci-fi way to both outsmart an alien interrogator (special guest star Nathan Fillion) and escape from intergalactic prison--in a loop for only a few hours on both the network and its site. Well-played, Adult Swim, well-played.

Adult Swim hasn't even set a date yet for the unveiling of the rest of Rick and Morty's new season. So far, they've said the season will resume some time in the summer, so the most impatient of Rick and Morty fans, who have been waiting since October 2015 for new episodes from Justin Roiland and Dan Harmon, will just have to shut the fuck up like Jemaine Clement whenever he sings about moonmen and wait a little longer.

The April Fools loop was a nice little surprise stunt, but how does the episode--which I was lucky to stream in its entirety after returning home late from a party, right before Adult Swim deleted it from their site--fare as the return of an eagerly awaited animated show that hasn't been first-run in almost two years? "The Rickshank Rickdemption," which is credited to Rick and Morty staff writer Mike McMahan, is a much more focused and tautly written (as well as much more action-heavy) season premiere than last season's "A Rickle in Time," a season opener that Roiland and Harmon were reportedly unhappy with because, according to the duo in Rolling Stone, "We were so close to something amazing and we never really got there from a structural standpoint," and "It went off the deep end conceptually and got really over-complicated." The third-season premiere is satisfying and funny enough to get me to bring back this blog's "'Brokedown Merry-Go-Round' Show of the Week" feature after a long hiatus.

Read more after the jump>>
Posted by J. John Aquino at 6:15 AM No comments: