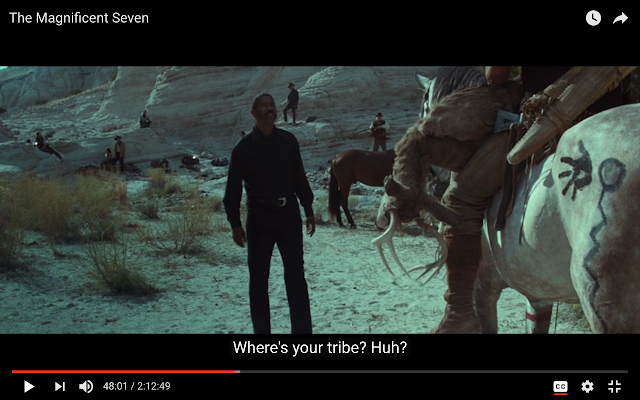 This is the second of 12 or 13 blog posts that are being posted on a monthly basis from January 2017 until this blog's final post in December 2017.

Once upon a time, I ran an Internet radio station that streamed film and TV score music. I don't really miss running it. The audience for it dwindled over the years, and even though Live365, the Bay Area company that powered the station before the end of the Webcaster Settlement Act led to Live365's demise early last year, is being resuscitated, I don't have any plans to bring back the station.

But I've kept the station alive on Mixcloud, where I've archived a few hours of old station content and posted lots of new one-to-two-hour mixes of music from original scores. The most popular of those mixes has been a mix of Kyle Dixon/Michael Stein score cues from the first season of Netflix's unexpectedly popular Stranger Things. It's called "Where's Barb?"

Late last year, the score albums for the Magnificent Seven remake and the film version of Fences, which both star Denzel Washington, were sent to my inbox, and that made me want to edit together an entire mix of score cues from Denzel movies. Denzel has been one of my favorite actors, ever since he stole the 1989 white savior movie Glory (and won an Oscar for stealing it) in the same way Don Cheadle would later steal Devil in a Blue Dress from Denzel. In Glory, he was basically the Toshiro Mifune character from Seven Samurai: the shit-talking troublemaker and outsider who learns to channel his anger and penchant for self-destruction into a worthy cause and then (SPOILER!) dies a hero.

The late James Horner's score from that 1989 Civil War movie, Terence Blanchard's 1992 Malcolm X score and Hans Zimmer's 1995 Crimson Tide score are a trifecta of Denzel-related instrumental badassery. Put those three scores together in either a mix or an hour of radio programming, and that hour of music is automatically going to sound as rousing and badass as a Denzel speech. Procrastinating on a writing project or that load of laundry? Put on the badass "Fruit of Islam" from Malcolm X's classic hospital march sequence. Immediately after hearing "Fruit of Islam," shit is going to be done. Laundry is going to be washed.

This month is the perfect time to post a mix of score cues from Denzel flicks. Several of Denzel's most highly regarded movies are frequently recommended during Black History Month by the likes of film critics and librarians, and Fences, Denzel's third big-screen directorial effort, is up for a few Oscars this weekend. Viola Davis, who reprised a role she had alongside Denzel in one of the various stage versions of Fences, is the frontrunner for the Best Supporting Actress trophy.

Throughout the Mixcloud mixes, I like to drop audio clips from the movies or TV shows that I've selected for score cue airplay. For this Denzel mix, I could have gone with audio from Denzel speeches as the connective tissue between each Denzel movie score cue, but I decided to go with something even more brash as connective tissue: clips from the very funny Earwolf podcast Denzel Washington Is the Greatest Actor of All Time Period, hosted by stand-ups W. Kamau Bell, the host of the CNN documentary series United Shades of America, and Kevin Avery, a writer for Last Week Tonight.

Bell, Avery and a special guest Denzealot, whether it's another comedian, a black filmmaker or one of Denzel's previous co-stars, dissect the work of their favorite charismatic actor, with lots of humor and occasional jabs at things like Virtuosity (the poorly received 1995 Denzel cyber-thriller that pitted 'Zel against a murderous A.I. played by a pre-L.A. Confidential Russell Crowe) and Denzel's visible discomfort during Much Ado About Nothing's frolicking scenes. Denzel himself is aware of the podcast's existence. But I highly doubt he's ever going to be a guest on this podcast that both celebrates his many triumphs as an actor (as well as a director of both episodic TV and small-scale feature films) and dredges up Virtuosity-esque career missteps, and Denzel's recent Fences press junket comment about not wanting to live in the past confirmed it. The podcast doesn't just live in Denzel's big-screen (and small-screen) past. It raises kids and builds a whole garden of gladioli in his past.

Read more after the jump>>
Posted by J. John Aquino at 8:15 PM No comments: