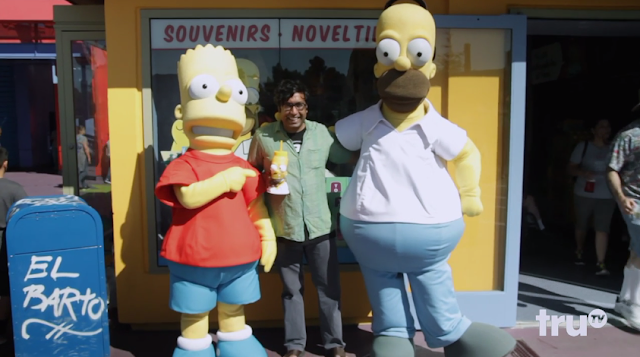 Fuck all these (predominantly white) superheroes fighting motion-capture-enhanced (and often boring) supervillains on the big screen. The movies I'm way more eager to see are documentaries about ordinary Asian Americans fighting stereotypes. It's a fight I've been a part of in some capacity. Nearly everything I do (even something as insignificant as writing a barely-being-read-by-anybody post for this insignificant and soon-to-go-completely-inactive blog) is some sort of clapback against Asian stereotypes, which have been a pain in my ass since junior high. Filmmaker Salima Koroma's Bad Rap, a doc about Asian American rappers, was the movie I wanted to see the most last year, and now The Problem with Apu, a 49-minute doc directed by Michael Melamedoff and hosted and produced by comedian and Politically Re-Active podcast co-host Hari Kondabolu, is the 2017 film that, despite its skimpy length and non-theatrical status, I've been anticipating the most, much more so than Wonder Woman, Thor: Ragnarok and even Star Wars: The Last Jedi.

The Problem with Apu chronicles the Indian American comedian's love/hate relationship with a little-known Tracey Ullman Show spinoff called The Simpsons. Kondabolu's a Simpsons fan who loves everything about the animated franchise that was brought to life by Matt Groening, James L. Brooks and the late Sam Simon, except for one character. That would be Apu Nahasapeemapetilon, the Indian convenience store owner who, since the show's premiere in 1990 (not counting a 1989 Christmas special that was actually the eighth episode in the first season's production order, "Simpsons Roasting on an Open Fire"), has been voiced by a white guy, longtime Simpsons voice actor Hank Azaria. The character is, as Kondabolu describes him in the doc, "servile, devious and goofy." Apu's shtick on the show is, as Kondabolu memorably said in an extremely funny 2012 Totally Biased with W. Kamau Bell segment about his delight over the rise of Indian American representation on TV, basically "a white guy doing an impression of a white guy making fun of my father!"


The most interesting tidbit about Kondabolu's Totally Biased rant about Apu, which went viral and ended up being shown in high school and college classrooms, is that Kondabolu was initially reluctant to write and perform the segment because he was so tired of complaining about Apu. I like how Bell--the now-defunct FX late night show's titular host and Kondabolu's boss in the Totally Biased writers' room--had to talk Kondabolu into doing it, as if Kondabolu were Logan being dragged out of his dead-end limo driver job to unsheathe his adamantium claws one last time and protect some runaway mutant kid.

Read more after the jump>>
Posted by J. John Aquino at 7:30 PM No comments: