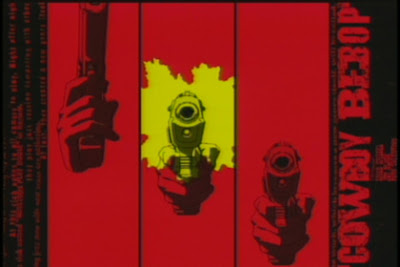 Director Shinichiro Watanabe's Bebop main title sequence--clearly inspired by animator Herbert Klynn's splashy split-screen titles from I Spy and It Takes a Thief--was justly praised by the A.V. Club for being one of "22 TV Opening-Credit Sequences That Fit Their Shows Perfectly." The Bebop titles were accompanied by the coolest original theme ever written for TV, "Tank!" by Yoko Kanno and the Seatbelts.

So the Jewfro'd Spike Spiegel might be played in live-action form by that great Jewish actor Keanu Reeves? Oh Lord. I'm taking that casting possibility as seriously as the "Cher to play Catwoman in next Batman film" item from a British paper. (Those U.K. rags are as trustworthy a source as Fux News. What's next? "Streisand to play Harley Quinn"?)

A live-action Bebop flick is an inane idea. If it gets greenlit, whoever Fox or producer Erwin Stoff will get to direct the flick will probably look for all sorts of ways to botch it, like not hiring Kanno--whose music was such an integral part of the original show--or cramming in dialogue where there shouldn't be dialogue. Part of the beauty of the show was its minimal dialogue. (I can't stand anime, but I dug Bebop, and the music and dialogue--or lack of it during some episodes--were why I enjoyed it when it first aired on Adult Swim. Speaking of which, maybe I ought to check out some Bebop eps from my DVD collection that I haven't watched yet. I never finished watching the entire series.)

The only director whom I think could pull off a live-action Bebop is Peter Yates, who has a knack for exciting action sequences with no dialogue (Bullitt, Breaking Away), but he's not exactly an A-lister anymore, I doubt any of the present-day Hollywood suits have ever seen his work and I'm not sure if Yates would be interested in anime-based material.

By the way, Selma Blair would be perfect as Faye Valentine. She's got the stems to play Faye.
Posted by J. John Aquino at 3:48 AM No comments: 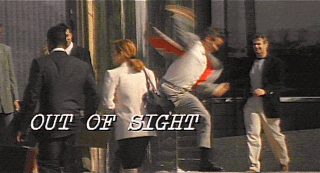 Email ThisBlogThis!Share to TwitterShare to FacebookShare to Pinterest
Labels: George Clooney, opening titles, Out of Sight, random act of violence against a necktie, Shutup I Love This Title Screen 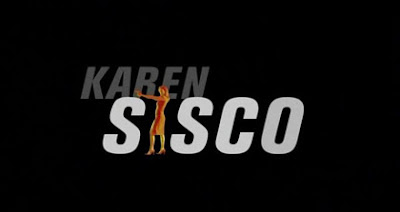 Karen Sisco
Titles by Imaginary Forces
Posted by J. John Aquino at 12:24 AM No comments:

Barbarella
Title design by Maurice Binder
Posted by J. John Aquino at 1:14 AM No comments: 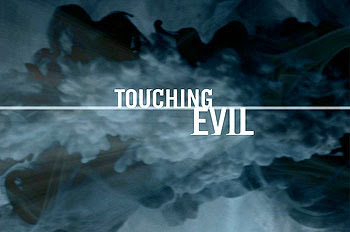 Touching Evil (2004)
Titles by Imaginary Forces
Posted by J. John Aquino at 1:37 AM No comments: 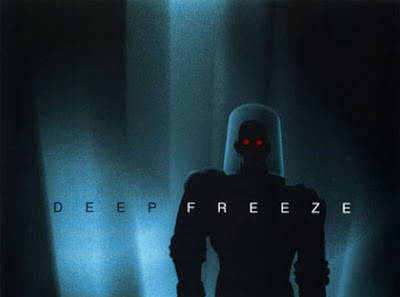 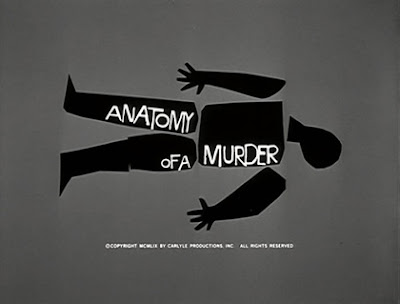 Anatomy of a Murder
Title design by Saul Bass
Posted by J. John Aquino at 12:21 AM 4 comments: 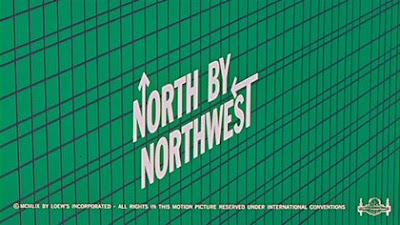 North by Northwest
Title design by Saul Bass
Posted by J. John Aquino at 1:37 AM No comments:

Casino
Titles by Elaine and Saul Bass
Posted by J. John Aquino at 2:36 AM No comments: 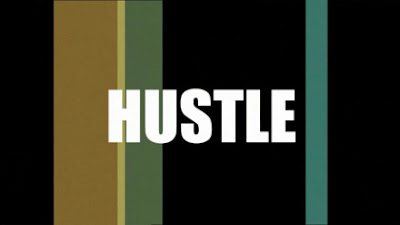 Hustle
Titles by Joe Berger and Pascal Wyse
Posted by J. John Aquino at 12:34 AM No comments: 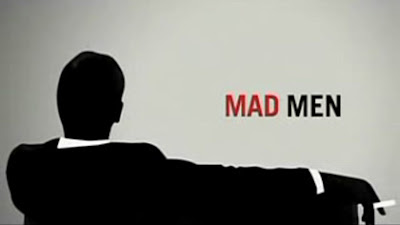 The next five title screens in this series will be from the sequences that influenced the designers of the clever Mad Men titles.
Posted by J. John Aquino at 12:13 AM No comments:

This is the first in a series of posts inspired by DVD Panache's "Shutup, I love this part" vidcaps. 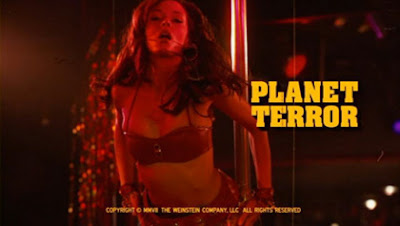 Planet Terror
Title design by Kurt Volk
Posted by J. John Aquino at 12:10 AM No comments: 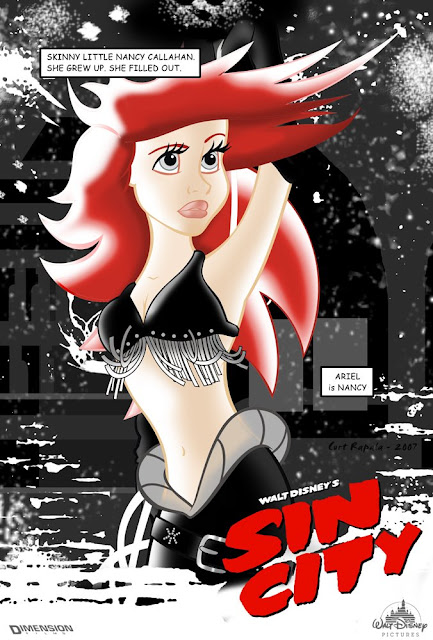 Who plays the Yellow Bastard in this version? Pluto?

[Via Topless Robot]
Posted by J. John Aquino at 8:49 PM No comments:

Shaft Anthology CD: "What is it with this black shit?" 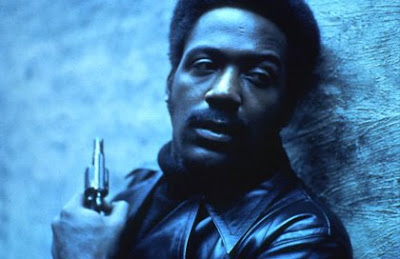 It warms my brown heart to see Film Score Monthly's so concerned about us minority folks.

A week that began on a sad note with soul legend Isaac Hayes' death has climaxed with some awesome news about Hayes' most beloved contribution to film music. The folks at FSM have announced that in September, they will release the Shaft Anthology box set, which will mark two milestones: the first-ever release of the film versions of the Hayes/J.J. Johnson cues from the first Shaft installment's instrumental score (the 1971 Enterprise/Stax soundtrack album was a re-recording) and the first CD appearance of Gordon Parks' score from Shaft's Big Score, with additional tracks that were not part of the Shaft's Big Score LP.

As a fan of the music from the first Shaft movie and its two sequels, this limited-edition release excites me even more than FSM's mammoth, instantly out-of-print Superman: The Music box set from earlier this year. The three-CD anthology is also a cool way to honor Hayes' memory. According to FSM, the box set was actually long in the works and "was sent to the pressing plant for manufacturing three weeks prior to his death."

All that's missing from the box set is the soundtrack from the 1973 threequel Shaft in Africa, which was reissued by Hip-O Select a few years ago. FSM will substitute the Shaft in Africa tracks with score cues from the watered-down and wack Shaft TV series, which was best remembered for removing the "sex machine to all the chicks" side of Shaft's character, much like what producer Scott Rudin forced the filmmakers to do to the Samuel L. Jackson version of Shaft 27 years later.

As soon as I receive the Shaft box set, selections from the set will definitely be added to daily playlist rotation on the Fistful of Soundtracks channel.

If you have both a PC and a Netflix account like I do, the entire 1971 Shaft flick can be streamed for free here. If you wanna see Shaft instantly, ask your mama!
Posted by J. John Aquino at 11:52 PM No comments: 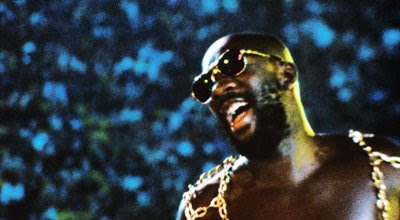 Now comes word that Issac Hayes has died at the age of 65.

Besides helping put Stax on the R&B map with his experimental albums (Hot Buttered Soul) and songwriting work ("Soul Man" by Sam & Dave), Hayes also sang and wrote the Oscar-winning "Theme from Shaft" (the Shaft score is credited to Hayes, but much of it was actually done by J.J. Johnson and Johnny Allen) and starred in and scored the 1974 blaxploitation flicks Three Tough Guys and Truck Turner. He composed one of my favorite themes written for TV, the forgotten but funky theme from The Men, ABC's answer to The NBC Sunday Mystery Movie in the early '70s.

On the small screen, Hayes had a memorable recurring role on The Rockford Files as Gandy, an ex-con whose signature quirk was to still call Rockford by his prison nickname "Rockfish," and he provided the voice of Chef on South Park, before he quit under mysterious circumstances related to the show's gags about Scientology (Hayes was a member).

But Hayes' greatest piece of work--other than "Chocolate Salty Balls"--remains the "Theme from Shaft." Like the duel of Alessandro Alessandroni's harmonica and fuzztone guitar in Once Upon a Time in the West or the horn stabs during a John Barry (or David Arnold) 007 score, that simple high-hat that opens the Shaft theme never fails to get my adrenaline going.
Posted by J. John Aquino at 4:29 PM No comments: 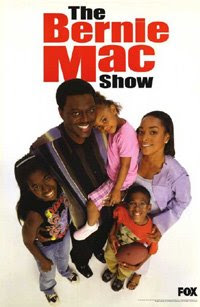 Hulu has a Bartload of Fox-owned shows that can be streamed at its site, from current studio cash cows like The Simpsons to forgotten oddities like Nanny and the Professor. But Hulu's Fox library is missing some essential Fox-owned shows, particularly The Bernie Mac Show, which introduced the Def Comedy Jam/Original Kings of Comedy fixture to an audience outside the stand-up circuit and briefly reenergized the stale family sitcom genre.

After I learned that Mac died from pneumonia earlier this weekend, I was hoping to find some of my favorite Bernie Mac Show episodes on Hulu. Its absence on Hulu is another example of Fox's rather shabby treatment of the show. In the second season, Fox shitcanned the showrunner, a pre-Daily Show Larry Wilmore, because they didn't think the show was funny enough (?), and Fox Home Entertainment has released only the first season on DVD. (I doubt Fox will release the rest of the series run, due to what I assume are music rights issues. The show had an old-school soundtrack that UBM would love because it was often less predictable than the Right Stuff CD label would have us believe.)

On the big screen, Mac stole scenes in the Ocean's series and Bad Santa and in lesser films like Chris Rock's Head of State. Because no clips of The Bernie Mac Show can be found on Hulu and the few clips of it that are on YouTube are sure to be removed any time soon, here's one of Mac's dopest scene-stealing moments, the Head of State montage that introduces Mac's character, a hilariously frank bail bondsman-turned-vice-presidential candidate ("I don't know nuttin' about Nato!").

(Did Obama know what he was getting when he invited Mac to perform at a fundraiser? He clearly didn't see Head of State.)

The Bernie Mac Show is worth catching in syndication--if you can find it these days (FX will make the show easier to DVR when it adds it to its daytime schedule this fall). The show was such a breath of fresh air when it premiered in 2001. It didn't have an annoying laugh track or studio audience (it was one of several early '00s sitcoms that ditched the canned laughter and multiple cameras, due to the breakout success of Malcolm in the Middle--of those shows, only Scrubs is still on the air). The series' brash, warts-and-all take on parenting and its knack for "keeping it real" were long-overdue antidotes to sitcoms where either Dad's always right (The Cosby Show) or Dad's a retard (According to Jim).

The show allowed Uncle Bernie to make mistakes as a parent, but he wasn't a total dumbass. Unlike Bernie, the typical bumbling sitcom dad wouldn't last in a room with Vanessa, Jordan and Bryana. The best episodes of The Bernie Mac Show often placed the shrewd Bernie in a match of wits with his equally shrewd nieces and nephew--this constant gamesmanship made the show less like Cosby and more like the delightfully un-cuddly It's Your Move (which was a weekly battle of wills between Jason Bateman's teenage scam artist and his favorite mark, Mom's new boyfriend) and the equally un-cuddly King of the Hill. Another great un-cuddly touch was Mac's threats to the kids ("I'ma bust your head 'til the white meat shows"), which were hardly as profane as what he blurted to the kids in his Original Kings routine, but the watered-down threats were still shocking to some viewers. As Verne Gay noted in his Newsday blog post, the series excelled at showing that "the daily business of taking care of kids was messy, complicated, difficult, full of anxiety, but - most of all - full of joy."

Here's another thing I like about Mac, and it's another reason why he's already so missed: unlike his prime-time "Uncle Bernie" alter ego, the proud Chicagoan couldn't stand L.A. It's nice to know not every comedian or celebrity believes L.A. is the center of the universe.
Posted by J. John Aquino at 3:45 AM No comments: