Another legendary Silver Age composer best known for his TV work has passed away. Alexander Courage, the composer of the original Star Trek's famous fanfare, died May 15 at the age of 88. Courage's fanfare hasn't lost any of its power, despite the countless permutations since the pivotal Star Trek II: The Wrath of Khan, which was the first Trek project to utilize the fanfare since the NBC show's 1969 cancellation.

The fanfare is expected to reappear in Michael Giacchino's score for the 2009 big-screen relaunch of Trek. "To me, that fanfare, boom, that says it all right there," said Giacchino in a SciFi Wire interview. "And this film is about everything that came before that. So, yes, I want to keep that."

Courage also wrote the '60s series' bongo-driven main title theme, which the fanfare has eclipsed in popularity--the composers who worked on the first 10 Trek feature films and The Next Generation quoted the fanfare more often than the title theme. The wordless siren song was considered bold and hip when it first hit the airwaves, while some found it to be hokey, like composer Gerald Fried, who wrote what has to be the '60s Trek's third most popular theme, the "fight theme" that originated in the "Amok Time" episode. Fried once told me in a 1999 interview that he wasn't much of a fan of Courage's operatic title theme, which resembles a South Seas melody.

Outside of the Trek TV series, Courage wrote scores for episodes of Lost in Space, Voyage to the Bottom of the Sea and The Waltons, filled in for John Williams on most of the score to Superman IV: The Quest for Peace and served as an orchestrator for Williams, Andre Previn, Adolph Deutsch and Jerry Goldsmith.

Geek Monthly editor-in-chief Jeff Bond, who's also the author of The Music of Star Trek, has posted a detailed obit on TrekMovie.com.

A clip from an entertaining documentary about Courage:

Best known for composing themes for sitcoms like The Andy Griffith Show, The Dick Van Dyke Show and That Girl, Earle Hagen died at the age of 88 on Monday.

Eric Deggans of the St. Petersburg Times once mourned the death of the original TV theme song (he blames its demise on the CSI franchise and House, which both rely on preexisting pop tunes for their opening credits, and ER, which shortened its opening theme from 49 seconds to eight seconds in 2006). We've also lost many of the legendary Silver Age composers who wrote several of the best of these tunes (Henry Mancini, Jerry Goldsmith, Elmer Bernstein and now Hagen).

In a TV Guide article about TV theme composing that I fortunately saved to my computer before the magazine's site took it offline, Hagen recalled how he came up with his most famous theme, "The Fishin' Hole" from Andy Griffith, which went through several different orchestral incarnations that he intended for a 50-piece band until he settled on a more minimalist tune--the perfect opening for a small-town sitcom:


Composer Earle Hagen fiddled with the melody for months before genius struck: "I thought, 'Hey, I ought to be able to whistle that.'"

Why not go there in the first place? Because the creative process is like peeling an onion, says Hagen, 83. "Half of coming up with something good is throwing away what's not. For Andy, I sat at my desk, thought about [the music], worked it out on paper — and threw it away. That happens a lot."

Few composers have scored as often as Hagen, who, over 33 years, generated a trove of TV themes...

Yet none proved more difficult to deliver than the feel-good, finger-snapping tune that would put Mayberry on the map. "Andy was the nightmare," Hagen says. The man who wrote a rhythm and blues classic ("Harlem Nocturne") was stumped by a show about a down-home sheriff and his bumbling deputy. But by simplifying things, Hagen finally nailed it. With a tape recorder running, he whistled the theme as his then 11-year-old son, Deane, snapped his fingers.

Nearly half a century later, the song moseys along, on lips everywhere. "Andy says he still can't go anywhere without somebody whistling it," Hagen says. "It has become a part of America."

The same could be said about Hagen's other themes. My favorite Hagen main title themes are from I Spy and The Mod Squad.

Most hour-long '60s dramas either recycled their score music (Star Trek) or relied on library music cues (The Fugitive) to save money. The big-budget I Spy was different. It was one of the few '60s dramas in which every single episode received an original score from teaser to tag. Hagen once said composing the music for I Spy was like scoring an hour-long movie each week. He raised the bar for TV scoring--he was the '60s equivalent of present-day composers like Lost's Michael Giacchino and Battlestar Galactica's Bear McCreary, who stand out from other TV composers by writing an insane amount of original music each week and relying on 40- or 60-piece orchestras instead of less expensive (and less interesting-sounding) synths.

In 2002, Film Score Monthly released a terrific compilation that featured Hagen's never-before-released cues from I Spy, including the stereo version of the supercool main title theme.

The Mod Squad theme, which is often performed by the Max Weinberg Seven in between segments on Late Night with Conan O'Brien, is awesome too:

(Poor Julie can't run. Pete and Linc have to help her up. Despite her Roger Moore-like inability to run, Rashida Jones' mom remains the hottest hippie on TV.)

Hagen also penned the frequently covered 1939 jazz standard "Harlem Nocturne," which the '80s Stacy Keach version of Mike Hammer adopted as its opening theme. Here's one of my favorite versions of "Harlem Nocturne," done by Jim Campilongo & the 10 Gallon Cats: 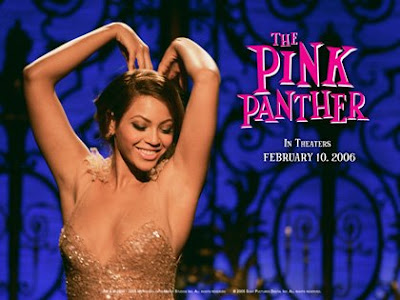 Beyonce might be a frontrunner for the Quantum of Solace theme, according to the latest rumors surrounding the race to find a singer for the theme, which I've been following with all the tenacity of a political blogger covering the Obama and Clinton campaigns because Bond themes are a favorite topic of mine. If Beyonce does land the job, I wouldn't be surprised if it's partly due to her performance of the 007-style "A Woman Like Me" during Steve Martin's Pink Panther remake.

Like I said in the thread I started over on the Film Score Monthly boards, I'd rather see Portishead or Editors tackle the Quantum of Solace theme, and as someone else suggested, Goldfrapp would be perfect as well.

I've seen some commenters bring up The Last Shadow Puppets as their favorite choice, and I like them too. But the Puppets are unlikely to be hired because their retro sound wouldn't fit the change in tone and direction that's been brought about by the gritty Casino Royale, as an L.A. Times blogger says in his argument that Amy Winehouse would be wrong for the Quantum of Solace theme because her sound is influenced by soul music from the era of Roger Moore, whom Winehouse famously name-dropped in "You Know I'm No Good," and the Daniel Craig movies are doing their damnedest not to recreate the campy Moore era.

However, Beyonce isn't a bad choice. One of the coolest Bond songs that never were, "A Woman Like Me" is a still-unreleased and rather underrated jam. It captures the 007 vibe better than Madonna's "Die Another Day": 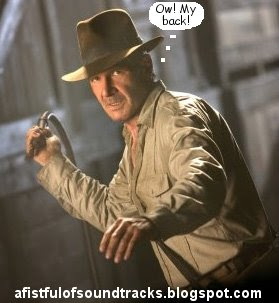 I'm a fan of the first and third Indy movies, but I don't like the second one for obvious reasons, so what does that mean for Indiana Jones and the Kingdom of the Crystal Skull, which is already getting mixed reviews? I probably won't like Crystal Skull, even though Harrison Ford is reunited with his Raiders of the Lost Ark co-star Karen Allen, my favorite Indy leading lady, and Steven Spielberg promised to keep those dreaded CGI FX to a minimum.

Or I might like it. I don't know. In the meantime, from the out-of-print and currently pricey Raiders and Temple of Doom soundtracks, here are the subdued and eerie Raiders main title music, the rousing "Airplane Fight" and "The Mine Car Chase," which accompanies one of the 1984 prequel's few enjoyable sequences.

Amy "Spill the" Winehouse is officially out of the running for the theme to the next 007 movie (did her latest bender arise from her inability to handle the pressure of writing a Bond theme?).

Oh God, I hope Eon doesn't go with some emo D-bag a la the closing credits of the Spider-Man movies.

Here are my dream choices for the singer(s) of the Quantum of Solace theme:

-Editors (their introspective lyrics are perfect for the darker tone of the Daniel Craig movies, plus this band, which has been called "an edgier Coldplay," rocks)
-Interpol
-Portishead

Hynde contributed two great original songs to the Living Daylights soundtrack (and should have sung that film's opening credits theme instead of a-ha frontman Morten Harket) and covered "Live and Let Die" on Arnold's Shaken and Stirred tribute album. I wouldn't mind hearing Hynde or Bassey record another theme for the series. I know Bassey's voice doesn't sound like it did in the '60s, but she's still quite the belter, and it'd be cool to see her croon another Bond theme before she plays her golden harp.

In other blockbuster franchise-related news, I just couldn't resist... Yahoo! News has made it sound like The Dark Knight will depict a romance between Batman and the Joker a la the late Heath Ledger's most popular movie: 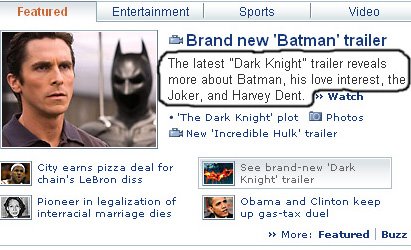 Fans of either Cloverfield (which I haven't watched yet) or the music of composer Michael Giacchino have been looking forward to downloading the '50s monster movie-style "Roar," Giacchino's nearly 10-minute Cloverfield closing credits theme, ever since the iTunes Store announced that it would release the full-length 12-minute version of "Roar" for $1.99 on Tuesday, April 29. ("Roar" was made available only to American iTunes customers. Sorry, limeys.)

Apparently, the availability of "Roar" was short-lived. Even though "Roar" skyrocketed to #13 on the iTunes album sales chart, the iTunes Store removed the track after only a couple of days, without letting any of its customers know. It's as if "Roar" never existed.

On Wednesday night, I tried to buy "Roar," but the download was taking too long to finish. I thought maybe the iTunes Store was down at the moment, so I gave up on the download and quit iTunes to reopen it at a later time, hoping that the store would be up and running by then and the download would automatically resume.

When I reopened iTunes the next day, the download never resumed. I did a search for "Roar" in the store, but the track's gone. It no longer exists.