Screw the overcrowded and stress-inducing San Diego Comic-Con (which begins today). Here at A Fistful of Soundtracks: The Blog is an Artists' Alley that's far less crowded or funny-smelling than the one down there. It consists of the niftiest TV show-inspired artwork I've found on the Web. 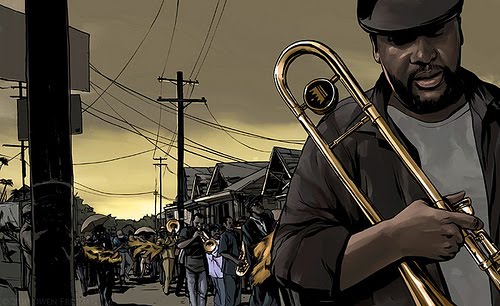 Treme by illustrator and Fistful of Soundtracks listener Owen Freeman (for a WaPo article about the show). 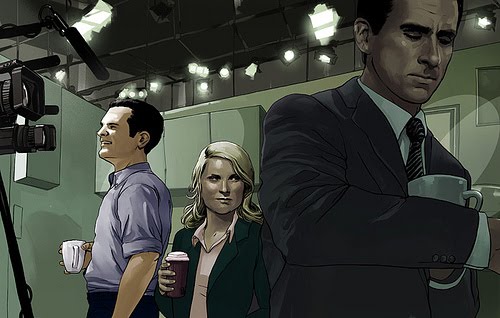 Phil Dunphy from Modern Family, Leslie Knope from Parks and Recreation and Michael Scott from The Office by Freeman (for a WaPo critique of mockumentary sitcoms). 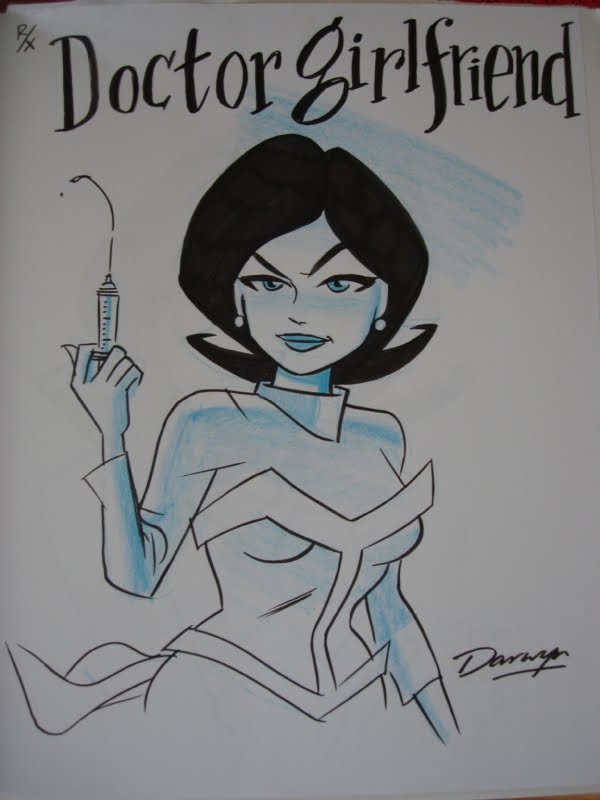 Read more after the jump>>
Posted by J. John Aquino at 2:45 PM No comments:

Who's That Voice on A Fistful of Soundtracks? #5: The female announcer during most of my station's sweepers 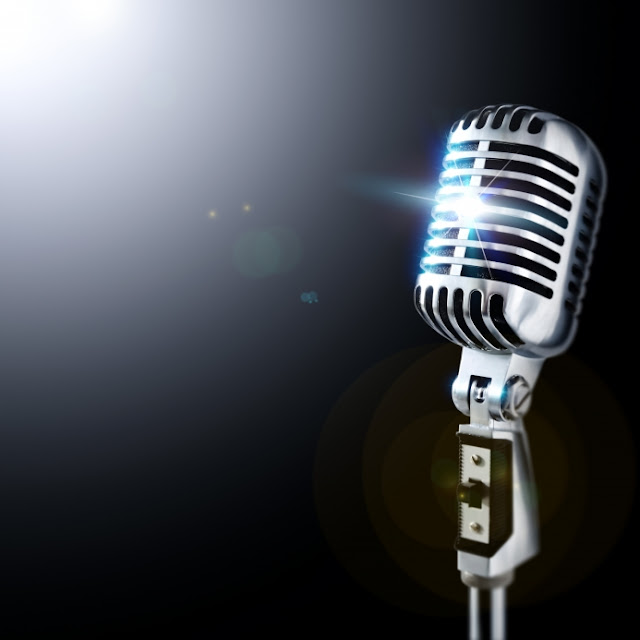 The Fistful of Soundtracks sweepers, which were all written by me, were recorded several years ago by a radio announcer named Melanie Taylor. It's been a while since I've had her read copy for me, but she's wonderful at it. My favorite of the AFOS sweepers Melanie recorded are the "F Zone" sweeper where she says "Your cubicle suddenly sounded 10 times cooler" to the accompaniment of Kool & the Gang's "Jungle Jazz" break and the "Soda and Pie" sweeper in which I had her quote Working Girl.

After I had Melanie record a series of AFOS sweepers four years ago, I flipped on BET J (now known as Centric) and overheard a network promo that featured her voice, and I thought, "Sweet!" It was like seeing a neighbor suddenly show up as an interviewee on the local news. I couldn't believe my ears.

Hear Melanie's voice during the "F Zone" block (Mondays at 4am, 9am and 3pm, Fridays at 5am, 9am and 3pm) and the "Soda and Pie" block (Fridays, Saturdays and Sundays at noon) on A Fistful of Soundtracks.

Who's That Voice on A Fistful of Soundtracks? #4: Hugh Morgan

Hugh Morgan
Who is he?: Not to be confused with Fun Lovin' Criminals frontman Hugh "Huey" Morgan, former WQXR classical music radio DJ and Face the Nation announcer Hugh Morgan has one of the most distinctive voices from the current crop of trailer announcers. His delivery is like a cross between George Takei and an accent-less, not-so-mumbly Sylvester Stallone.
Most memorable voice work: "Scooby Snacks." Kidding!
Back to seriousness. Most memorable voice work: It's a toss-up between Morgan's voiceovers for the Matrix TV spots and his narration during the White Noise trailers and ads, the most eerie of Morgan's many horror trailer voiceovers.
When can you hear him on the Fistful of Soundtracks channel?: The trailers for The Matrix Revolutions, Rosewood, The Last of the Mohicans and Heat. As I said once before, when I was a university freshman, Heat's tantalizing trailers and TV spots got me sold on the teaming of Pacino, De Niro and Michael Mann. But having to buy that Pacino could kick Henry Rollins' ass--not so much.

Previous "Who's That Voice?" bios:
Paul Frees
Percy Rodrigues
Adolph Caesar
Posted by J. John Aquino at 5:00 AM No comments: 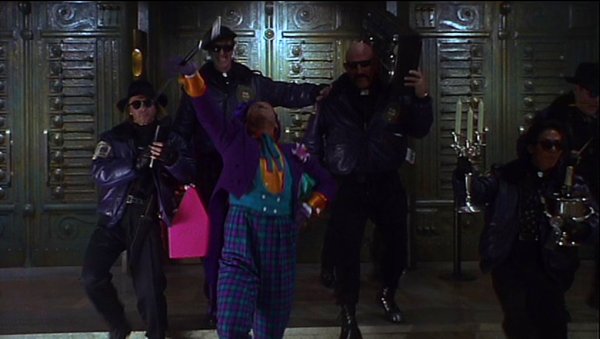 It's a great week to be a fan of the Batman movies. Christopher Nolan confirmed that Christian Bale will reprise his impression of Froggy from The Little Rascals for their third Batman installment together, and La-La Land Records announced yesterday that it's releasing an expanded reissue of one of my all-time favorite film scores, the rousing 1989 Batman score by Danny Elfman (his third feature-length score for the director he's worked with the most, Tim Burton). That score was a revelation for those of us who were more familiar with Elfman's Oingo Boingo joints than his film music or whose only exposure to his original scores was the Boingo-esque music he composed for the Sledge Hammer! opening titles, Beetlejuice and Midnight Run (I hadn't seen Pee-wee's Big Adventure yet). The Batman score introduced to us a whole new side to the man behind "Dead Man's Party," "Little Girls" and the Weird Science theme.

The two-CD set will debut as an exclusive goodie at La-La Land's booth at next week's San Diego Comic-Con shortly before the label makes it available to everybody on July 27. The reissue will contain an hour and a half's worth of previously unreleased material. Even the brief library music-style cue Elfman wrote for the Joker's Smilex commercial will make it to the expanded edition. The tracks I'm looking forward to the most are rejected cues like an alternate version of the main title theme.

I wonder what the Goddamn Batman would have to say about this eagerly anticipated release on his Twitter page. He'd probably tweet (in two parts, of course), "Threw away Robin's Twilight soundtrack CDs from the CD changer to make room for the never-before-released workout music Elfman wrote for me. Robin, your Twilight CDs are melting inside the Batcave furnace if you need them."

Who's That Voice on A Fistful of Soundtracks? #3: Paul Frees 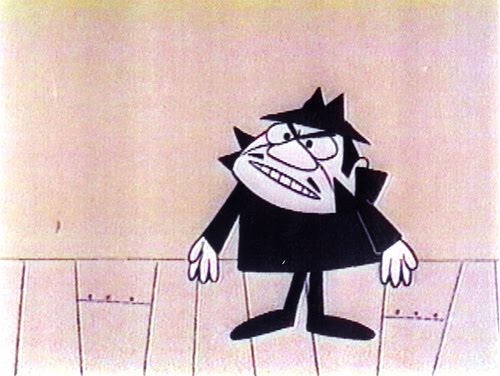 Paul Frees
Who is he?: Boris Badenov. Burgermeister Meisterburger. Toshiro Mifune's substitute voice in Grand Prix and Midway. The voice that accompanied countless old Disneyland attractions and the most depressing ending in a G-rated movie ever (Beneath the Planet of the Apes).
When can you hear him on the Fistful of Soundtracks channel?: The trailers for Sweet Smell of Success and Patton.

Who's That Voice on A Fistful of Soundtracks? #2: Percy Rodrigues 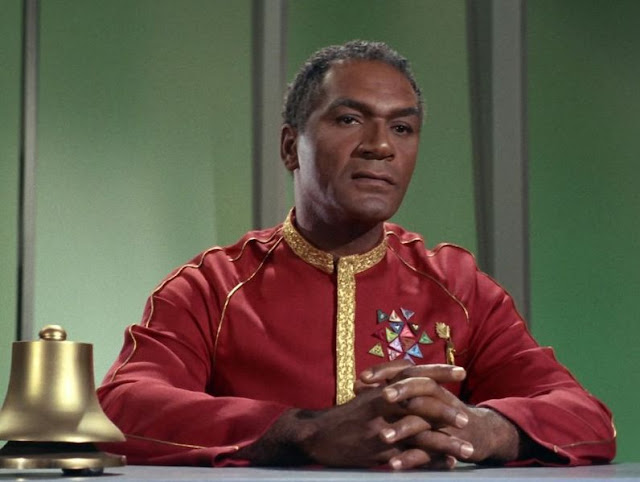 Percy Rodrigues
Who is he?: As an announcer, this African Canadian actor and Peyton Place cast member was best known for scaring millions of white people away from the water during the Jaws trailers and ads (he's one of the interviewees in The Shark Is Still Working, a 2006 documentary about the making of Jaws that also marks the actor's final public appearance before his death). But because the release of the original Jaws was before my time, I know Rodrigues best from the She's Having a Baby trailer ("I stopped taking the pill") and the Alien³ trailer, where he declared that "the bitch is back." I like how he could sound ominous one moment and then be tongue-in-cheek seconds later--or be both at the same time, like in the She's Having a Baby and Alien³ previews.
Most memorable on-screen role: On the original Star Trek, Rodrigues guest-starred as a Starfleet commodore whose voice must have frightened Dr. McCoy away from the Enterprise swimming pool.
When can you hear him on the Fistful of Soundtracks channel?: The trailers for Taxi Driver, Lifeforce and The Empire Strikes Back: Special Edition.

Previous "Who's That Voice?" bio:
Adolph Caesar
Posted by J. John Aquino at 2:00 PM No comments:

Who's That Voice on A Fistful of Soundtracks? #1: Adolph Caesar 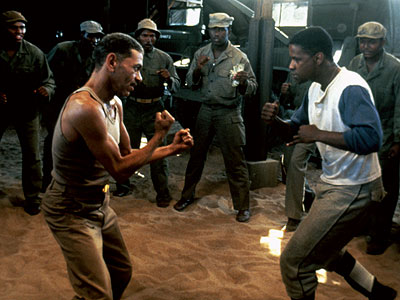 I haven't blogged in ages because I'm busy with my webcomic (although I've been doing occasional microblogging), so to keep the blog from looking like it's frozen in time, here's the first in a series of posts that identifies the legendary voices that turn up often during either the Fistful of Soundtracks channel's programming or the movie/TV trailer clips that function as intros to the tunes that are part of the channel's "Assorted Fistful" block.

Adolph Caesar
Who is he?: A New York stage actor whose classy baritone was all over trailers and ads for blaxploitation flicks, Caesar earned acclaim late in life for some of his acting work both on stage and screen before dying from a heart attack in 1986.
Most memorable on-screen role: A role he reprised from the stage: the self-hating light-skinned black sergeant in A Soldier's Story who, in the above snapshot, is preparing to whup the ass of some future double Oscar winner.
Most memorable voiceover work: The trailers and TV/radio spots for the original Dawn of the Dead ("When there's no more room in hell, the dead will walk the earth").
When can you hear him on the Fistful of Soundtracks channel?: The trailers for Superfly and Hell Up in Harlem and the radio spots for Trouble Man, Slaughter, Three Tough Guys, Black Caesar, Truck Turner, Foxy Brown and Claudine.
Posted by J. John Aquino at 5:05 PM No comments: