I'm bored with doing this Blogspot blog, especially when my new Tumblr blog is the more popular blog right now, and my Tumblr followers are more receptive 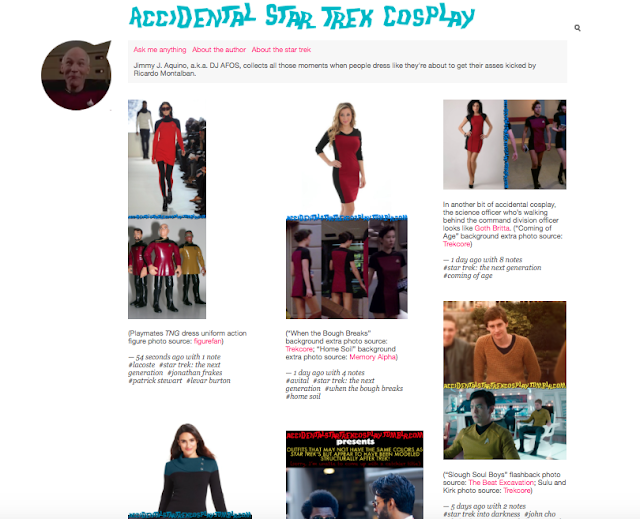 Laura Benanti's Melania Trump impression on Colbert is the funniest satirical encapsulation of the surreal, so-white-it-makes-Lawrence-Welk-look-like-106-&-Park shitshow that is the 2016 RNC 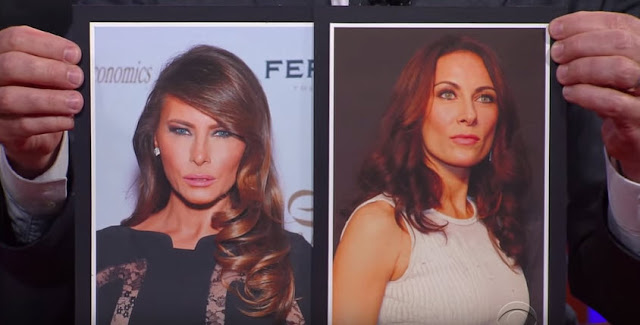 Like I've said before, whenever there's a news story that involves race, I've lately found myself saying, "I can't wait to hear what Larry Wilmore has to say." The controversy over Melania Trump's 2016 Republican National Convention speech sounding exactly like Michelle Obama's 2008 Democratic National Convention speech may not be tied to a thornier current subject like racially motivated bullying or police reform, but her act of plagiarism is yet another example of a white woman stealing from a black woman, so I was wondering when The Nightly Show with Larry Wilmore would distinguish itself from other late-night comedy shows and point out how the former supermodel's RNC speech reeks of cultural appropriation. The Nightly Show did not disappoint.

Read more after the jump>>
Posted by J. John Aquino at 7:30 PM No comments:

AFOS Blog Rewind: Mr. Robot season 1 brought us a summertime mystery as intriguing as "Is Picard a goner?" and "Is DiCaprio still asleep?"


The second season of Mr. Robot begins this Wednesday on the USA network, three days after the network surprised the Internet by pulling a Beyoncé and posting the entire first half of Mr. Robot's two-part season premiere on Twitter, Snapchat, YouTube and usanetwork.com for only approximately an hour and 50 minutes. After that nearly two-hour period, USA deleted the episode from the four platforms--an enigmatic and cold-hearted move straight out of the titular hacktivist's playbook. So from August 5, 2015, here's a repost of my discussion of the first six episodes of Mr. Robot's compelling first season.

June 18, 1990 was when The Next Generation finally stepped out of the shadow of the original Star Trek and proved at the end of "The Best of Both Worlds, Part I" that it was going to take certain chances with its storytelling--or rather, boldly go where no Star Trek incarnation had gone before. Sure, The Next Generation had done a few excellent episodes before--"A Matter of Honor," a standout hour where Riker temporarily serves on a Klingon ship, immediately comes to mind--but "The Best of Both Worlds, Part I" upped the ante with an especially tense hour full of possible changes to the show's status quo and moments of Starfleet being under attack in ways that hadn't been seen since Star Trek IV: The Voyage Home.

On the old Star Trek, the Enterprise's most powerful antagonists, whether it was a starship-devouring machine or an actual god, would always be defeated or outwitted by the Enterprise crew in less than an hour. But the Borg, which the Enterprise-D first encountered a year before in "Q Who," were so powerful and unstoppable during "The Best of Both Worlds, Part I" that they clearly weren't going to be put down at the end of act five, especially after they transformed Captain Picard into one of them and assimilated his skills as a commander and his knowledge of Starfleet so that they could now attack the fleet's weaknesses. And it all ended with the most memorable final line in a Star Trek story--Riker saying, "Mr. Worf, fire"--until Picard's "Five-card stud, nothing wild... and the sky's the limit" line at the end of The Next Generation's final episode, that is.

It was one hell of a way to start the summer. I really thought "The Best of Both Worlds" was going to resume the following September with Picard floating around in a white robe and playing a golden Vulcan harp. A few discussions of the impact of "The Best of Both Worlds" have tended to say, "This was before the Internet, so over the summer, Next Generation viewers shared their excitement over the cliffhanger in the most old-fashioned ways: over the watercooler, phone chats, the convention at the Ramada, telegrams, carrier pigeons..." But because these are Star Trek fans we're talking about here, many of them have always been computer-savvy, and the ones who were the most computer-savvy were actually ahead of everyone else communication-wise in 1990 when they speculated over Picard's fate on things called BBSes. Remember those?

Once in a while, a really juicy mystery comes along in the summer and rocks the pop culture world. In 1990, it was "Is Riker going to kill Picard?" In 2010, it was "Is Leonardo DiCaprio still in the dream world? Because that damn top wouldn't stop spinning!" Summer's supposed to be the time for dumb blockbusters and breezy escapism, not thought-provoking and dystopian narratives. So thanks a lot, Mr. Robot, for ruining the summer with your hacktivist leanings, your mistrust of corporations, your frustrations with economic inequality, your moral ambiguity, your clever use of (often moody) music, your unreliable narrator who can't tell apart reality from his imagination and your handful of nifty mysteries that are the next "Is Leo still asleep?"

Mr. Robot is the story of Elliot Alderson (Rami Malek), a morphine-addicted, anti-social Manhattan cybersecurity expert whose skills as a vigilante hacker attract the attention of the titular anarchist (Christian Slater), who recruits Elliot to help him and a band of hackers known as "fsociety" take down corporate America, particularly a conglomerate called E Corp. I can't think of another previous hour-long drama that debuted in the summer and was as stylish or as eerie or as playful about its storytelling as Mr. Robot. People who were born before the Vietnam War--that's all this blog's fucking readership seems to be made up of--will probably say to me, "There was The Prisoner. That premiered in the summer." First of all, stop flaunting your age and all the things you've gotten to watch and read. Second of all, I'm much younger than you. Am I supposed to care that The Prisoner was a summer replacement for Jackie Gleason's variety show? (Really? That's like if Red Skelton temporarily lent his time slot to Superjail.) I first encountered The Prisoner in the same way everyone else has: Netflix and not at all in the summer. I'm supposed to be impressed that you watched The Prisoner before everyone else was watching it? Give it a rest, alright, hipster? 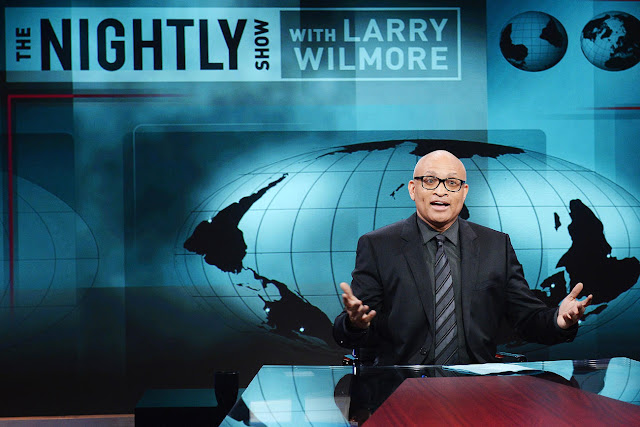 For a couple of years, whenever moments of appalling racism would dominate the news cycle for an entire week, I'd think to myself either "I can't wait to hear what Totally Biased has to say" or "What would be Jon Stewart's exasperated but largely funny response to all this, and could he please not sing again like he tried to do at the Rally to Restore Sanity and/or Fear?"

Well, Totally Biased doesn't exist anymore (although a couple of weeks ago, Totally Biased alums W. Kamau Bell and Hari Kondabolu started joining forces again for a new podcast, Politically Re-Active, so Kamau has now hosted so many different 30-to-120-minute shows in the podcastosphere that he makes Guy Smiley look like a lazy douche), and Stewart left The Daily Show in the hands of Trevor Noah. So these days, it's "I can't wait to hear what Larry Wilmore has to say" or sometimes "How will Noah's non-American and more global perspective handle this one?" 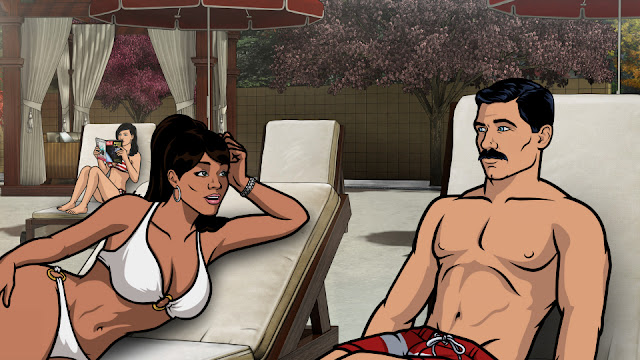 Shortly after the conclusion of Archer's seventh season, a largely satisfying season that rebooted Adam Reed's profane spy spoof as a private eye genre spoof, FX announced last month that it has renewed Archer for three more seasons. From January 23, 2013, here's a repost of my discussion of one of Archer's best episodes from its days as a spy show (as well as the days when the name ISIS didn't have depressing connotations like it does today). This episode, like all other episodes from Archer's first six seasons, can currently be streamed on Netflix and Hulu.