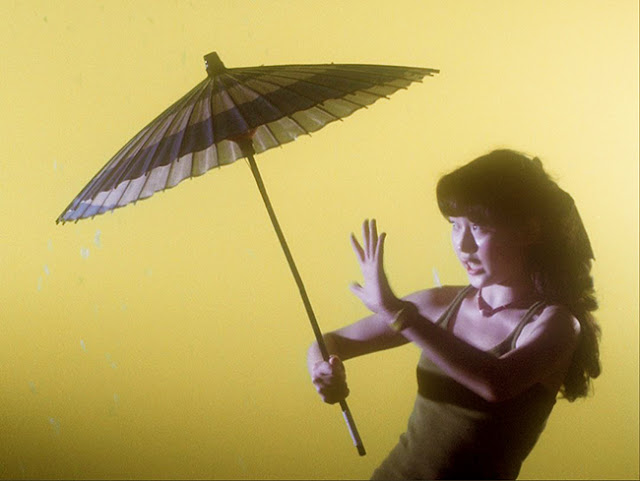 This is the 13th of 15 all-new blog posts that are being posted on a monthly basis until this blog's final post in December 2017. I know I said "monthly basis" all through 2017, and instead, there ended up being two posts this October and three back in August, but I guess I discovered that in August and now October, I found plenty of shit I wanted to write about before I call it quits. "I Can't Believe I've Never Seen It Till Now!" is a series of posts in which I reveal that I never watched a certain popular or really old movie until very recently, and that's largely because I'm Filipino, we're always late to the party and that's how we do.

Director Nobuhiko Obayashi's 1977 Japanese box-office hit House is the kind of film that, had it been made in 2017, would have ended up being the subject of various audience reaction videos by YouTubers who want to show how confused and bewildered the audience members look while trying to process the extremely weird shit they're watching. Not to be confused with the 1985 American horror comedy of the same name and the long-running Hugh Laurie vehicle of the same name, Obayashi's J-horror oddity was largely unknown in America until 2010, when Janus Films introduced the Toho Studios flick in theaters to American film geeks and the Criterion Collection released it on Blu-ray. Both a Phil Chung blog post for YOMYOMF (his post is basically "I don't know what the fuck I saw, but I loved it!") and a Trailers from Hell commentary track for the film's 1977 trailer made me want to see House.

House is definitely the most unconventional haunted-house movie I've ever seen. I was expecting a Riki-Oh: The Story of Ricky-type bloodbath with a bit of a Battle Royale-style attitude about not giving a fuck about brutally killing off so many innocent-looking Japanese teens.

What I got instead was something stranger than Riki-Oh. I believe I have a clip of myself reacting to every scene in House:

Email ThisBlogThis!Share to TwitterShare to FacebookShare to Pinterest
Labels: Bruce Lee, Ennio Morricone, Enter the Dragon, film music, Halloween, I Can't Believe I've Never Seen It Till Now, NSFW, The Criterion Collection, The Good the Bad and the Ugly, Trailers from Hell, YOMYOMF

This is the 12th of 14 or 15 all-new blog posts that are being posted on a monthly basis until this blog's final post in December 2017.

Back in 2011, I typed out an outline for a graphic novel or screenplay I wanted to someday write about the Minneapolis rock music scene in 1985, and the story was to be told from the point of view of a female Filipino American Prince fan who leads a band of otherwise all-male musicians called the Beautifully Complex Women. In the outline, I explained that a rumor spreads around Minneapolis that Prince, the city's favorite son, is looking for a new act to sign to his Paisley Park label, and the Beautifully Complex Women and a whole bunch of other local bands vie, often over-aggressively, for the attention of the unseen Purple One.

I called the script idea The Beautifully Complex Women. It was going to be my way of exploring why it's so difficult for Asian American artists--whether they're the power pop band Moonpools & Caterpillars in the '90s or the Philly rap group Mountain Brothers in the early 2000s--to find mainstream success in the recording industry: 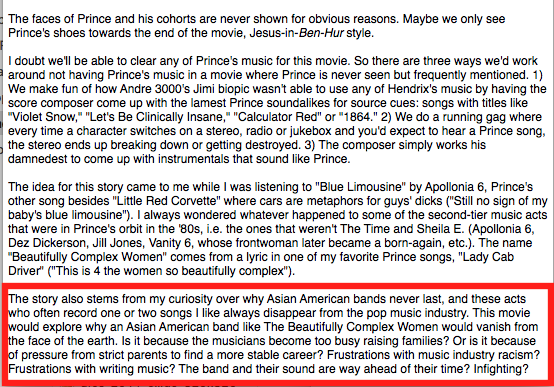 Bad Rap, African American filmmaker Salima Koroma's 2016 documentary about the various hardships Asian American rappers have to deal with in the industry, covers all those above questions and more in a lean, efficient and enjoyably provocative manner that makes me say, "Wow, I think I'll let this 1985 Minneapolis battle-of-the-bands script idea remain a script idea." Her film turned out to be better than my script idea.

Koroma's documentary was the 2016 film I most eagerly wanted to watch last year, even more so than a tentpole blockbuster like Captain America: Civil War or a critics' darling like Moonlight. (Sorry, Barry Jenkins.) Now Bad Rap is streamable on Netflix after a run on the festival circuit, and, man, the doc was worth the wait.


Bad Rap, which was crowdfunded on Indiegogo, took Koroma and Korean American producer Jaeki Cho--the (now-former) manager of one of the film's four main subjects--three and a half years to make. The doc follows four Asian American spitters who either have often toured together or have done guest features on each other's tracks.

The amiable and quick-witted Jonathan Park, who's now in his thirties, was an L.A. skater kid who, as a teen, stumbled into the battle rap scene--the Detroit version of the battle rap scene was famously depicted in 8 Mile--and fell in love with the art form, or as I like to call battle rap, "Don Rickles insult humor by people who, unlike Rickles, have rhythm." Park, a.k.a. Dumbfoundead, is a hero in L.A.'s Koreatown (judging from his music videos and YouTube shorts, he is to K-town what De Niro is to New York: the unofficial mayor) and in battle rap circles, but he's unknown elsewhere. Bad Rap reveals--and I wasn't previously aware of this--that Drake is a fan of Dumbfoundead's battle raps, which makes me like Drake a little more.