Bernard Herrmann would have turned 100 today 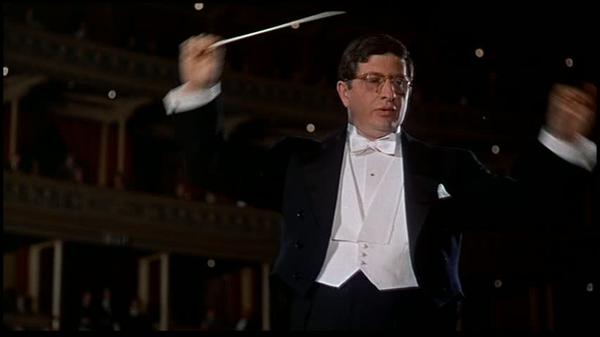 Because today marks the centennial of influential composer Bernard Herrmann, CBS News recently assembled a lengthy slideshow/audio clip gallery that's a pretty good overview of Herrmann's career. It's fitting that CBS would be the one to give Herrmann such a thorough and reverent centennial tribute because Herrmann had a long association with the network, from the days when radio was a more dominant medium (Herrmann served as conductor of the CBS Symphony Orchestra and composed score music for countless CBS radio dramas, including Orson Welles' 1938 War of the Worlds broadcast) to the period when CBS conquered TV in addition to radio (Herrmann provided music for several Twilight Zone episodes and composed the anthology show's somber and lesser-known first-season opening title theme). 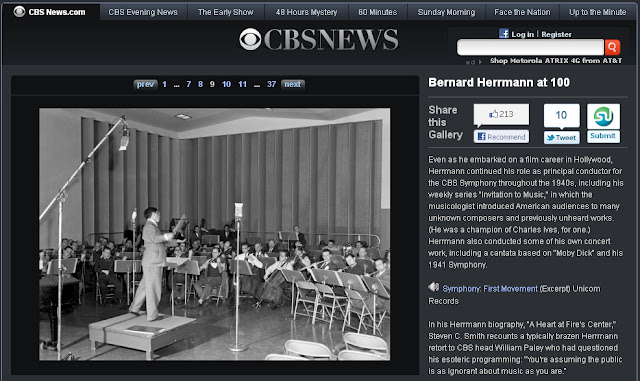 These days, Herrmann is best known for his brilliant work with Welles, Alfred Hitchcock and Ray Harryhausen, which probably would have irked Herrmann because the famously testy maestro hated being labeled a film composer and wrote for more than just the screen (for instance, he composed an opera based on Wuthering Heights). His final film score, is, to me, his most stunning achievement. Herrmann initially had no interest in working on Martin Scorsese's Taxi Driver, the ultimate vision of '70s New York-as-hell, but then he changed his mind because he liked the part of Paul Schrader's script where Travis Bickle poured peach brandy on his Corn Flakes.

Perhaps because Herrmann knew he wasn't long for this world at the time he wrote it (he finished recording it only a few hours before he died in his sleep on December 24, 1975), the Taxi Driver score sounds like the last few gasps of a dying man, with its thunderous, apocalyptic-sounding percussion, a melancholy theme for alto sax that was performed by an uncredited Ronny Lang and a final cue where the last few notes quote at a funereal pace a previous Herrmann theme, the ominous three-note motif that concludes Psycho.

Be sure to check out the mp3 clips of the Taxi Driver title themes and other Herrmann compositions that CBS News has posted--or enjoy Herrmann's cues from Taxi Driver, The Man Who Knew Too Much, North by Northwest, Vertigo, Psycho, Jason and the Argonauts and Marnie whenever they're streamed during the "Assorted Fistful" block on A Fistful of Soundtracks.
Posted by J. John Aquino at 11:15 AM No comments:

Star Blazers was light years ahead of Game of Thrones

(This post first appeared in a completely fucked-up form on Blogcritics. The following version doesn't contain any of the inane edits that were made to it by a really sloppy editor. One of those inane edits actually reworded a fact about a production company so that what it now said about that company was factually incorrect. It's so goddamn frustrating, man.) 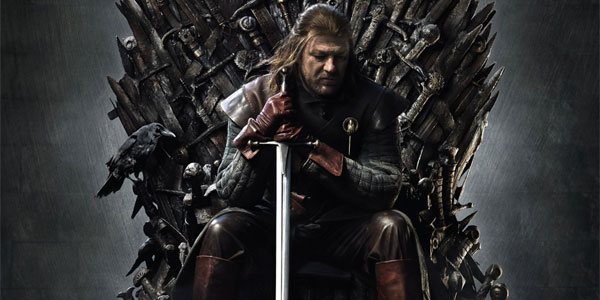 It's been a long time since an HBO drama series has made me think to myself at the end of each episode, "God, I'm dying to see what happens next week." The last HBO drama to elicit a reaction like that from me was David Simon's Iraq war show Generation Kill. But that was actually a miniseries, not a drama with a not-so-limited run like The Sopranos, so the last non-Generation Kill HBO drama where I was really invested in every character was The Wire three years ago--until Game of Thrones came along.

(WARNING: Anyone who has never watched either of the two shows that are mentioned in this post's title can leave now. Spoilers right after the parenthesis.)

Raiders of the Lost Ark turns 30 years old this week, while George Lucas makes plans to digitally tweak the Indy/Marion foreplay scene so that it's now nothing more than an Eskimo kiss

Raiders of the Lost Ark is a movie I've loved since I was a kid in the '80s and have considered the best of the Indiana Jones series, partly because, as blogger Odienator once noted, "Raiders reveals a lot about its characters by showing rather than telling."

Everyone who was involved in Raiders did incredible work in this film, including Steven Spielberg, John Williams, editor Michael Kahn, cinematographer Douglas Slocombe, stars Harrison Ford and Karen Allen, truck chase stunt double Vic Armstrong and even Alfred Molina, in a bit part that was his first role in a feature film (Molina was last seen revisiting the sci-fi/fantasy genre when he played an assistant D.A. who quit prosecuting and was somehow able to get back his never-before-mentioned old job as a cop on Law & Order: L.A.).

Because it's celebrating its 30th anniversary this week (Paramount premiered it on June 12, 1981), here's a clever tribute to Raiders that I first posted in 2009. Ivan Guerrero is a videographer who's a whiz at crafting alternate-reality trailers for contemporary movies out of footage from much older movies. He recently put together a "pre-make" of Joss Whedon's currently-being-filmed Avengers adaptation that showed what the movie would have looked like in a parallel universe where it was made in 1952. One of Guerrero's earlier videos was a similar pre-make of Raiders that used tons of clips from Charlton Heston's Secret of the Incas, a 1954 Paramount B-movie that's been cited as an influence on Raiders.

In the parallel universe that's established by Guerrero's pre-make, their Indy sounds more like Moses than a regular guy who turns into Don Knotts whenever he's around snakes.

Paramount has never released Secret of the Incas on DVD, so Guerrero's fake trailer is one of the few places where we can get glimpses of this proto-Raiders. I enjoyed the fake trailer so much back in 2009 that I even played around in Photoshop and created a snapshot of an old-timey-sounding blurb about the alternate-universe Raiders that would have fit right in with the pre-make. 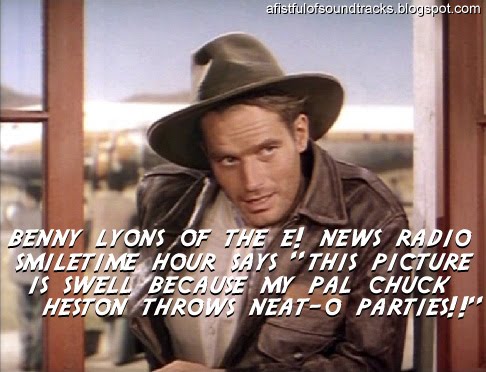 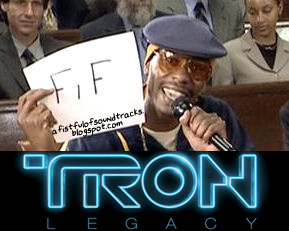 I've been frequently flipping to The Weather Channel lately, and I've noticed the channel's "Local on the 8s" forecast interstitials have ditched most of the smooth jazz instrumentals that would usually accompany the temperature graphics for slightly edgier music like the beat digger favorite "Hyperbolicsyllabicsesquedalymistic" from Isaac Hayes' 1969 Hot Buttered Soul album.

When I first heard "Hyperbolicsyllabicsesquedalymistic" during "Local on the 8s" a few months ago, I was like, "I have no idea which Weather Channel employee picked 'Hyperbolicsyllabicsesquedalymistic,' but I'd like to buy that person a beer or--and this would be more fitting because of its presence in DJ Quik's 'Born and Raised in Compton'--a 40."


Then last month, I noticed Daft Punk's Tron: Legacy end title theme, the "End of Line" theme for the club of the same name in Legacy and John Williams' "Theme from Jurassic Park" were added to "Local on the 8s" rotation (those three tracks still surface during the segment even though they're intended for May airplay and it's not May anymore). I thought I was imagining things. I wasn't: 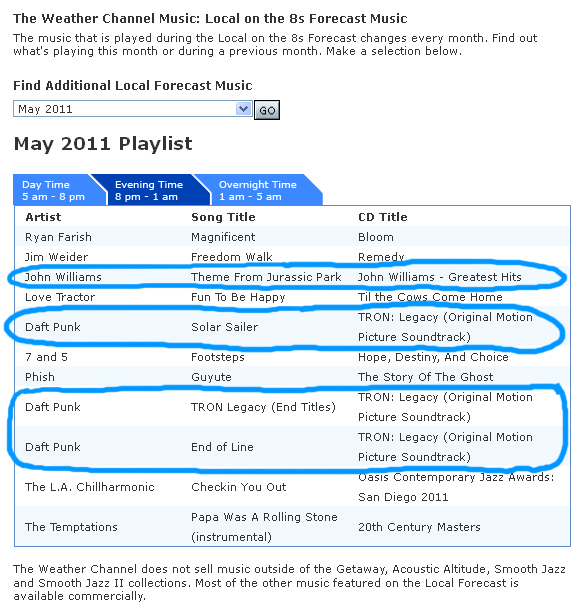 Jurassic Park's stately and warm-toned main theme isn't really surprising as a choice for "Local on the 8s," but the propulsive grooves from Tron: Legacy are a surprise (by the way, the Legacy end title theme, "End of Line" and "Solar Sailer" can also be heard during A Fistful of Soundtracks' "Assorted Fistful" block, along with other Legacy tracks like "C.L.U.," the ubiquitous but still-awesome "Derezzed," "Outlands," "Rinzler" and "The Game Has Changed"). Someone in Atlanta or wherever the "Local on the 8s" updates are produced has great taste in film and TV score albums.

There's an explanation behind the channel's move towards less bland-sounding instrumentals during "Local on the 8s." In a 2009 Atlanta Journal-Constitution article about the segment's switch from artists like Spyro Gyra to folks like The Stones, a Weather Channel exec said, "I think we've been doing an injustice to our viewers playing, for the lack of a better word, elevator music on the segments for all these years."

The calming shores of Spyro country were causing "Local on the 8s" viewers to doze off or lose interest.

An Idolator blogger who was impressed with the "Local on the 8s" playlist upgrades joked in 2009 that "I never thought, ever, that I would see former Yankees great Bernie Williams and the Smiths on the same playlist--but that's just an amuse for after 8 p.m., when things get really crazy and Phish gets added to the proceedings. Whoa Nelly!"

Hold up. Did he say Phish? Let's look at that May 8pm-1am playlist again: 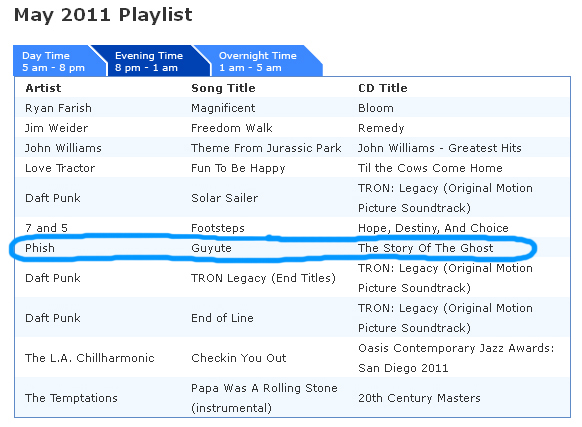 Things are way past crazy now.


Unlike that short-lived experiment where The Weather Channel added movies like The Perfect Storm and Misery to its programming last year, this is a change I can agree with.
Posted by J. John Aquino at 8:40 AM No comments:

In honor of Leonard B. Stern, the recently deceased Honeymooners and Get Smart writer who created the never-not-boring parlor game and childhood staple Mad Libs, here's a highly addictive new version of Mad Libs that I spotted on Crushable.

It's inspired by the most consistently funny character during the 36th and most recent season of SNL, Weekend Update nightlife correspondent Stefon. (The Ed Hardy shirt-clad expert on New York clubbing is played by Bill Hader. He's always "corpsing," or erupting into uncontrollable laughter and breaking character, whenever he appears as Stefon because the SNL writers throw away the Stefon lines Hader rehearsed with and then replace them on the cue cards with completely new lines during the live broadcast, hence Hader's surprised and giggly reactions.)

Here are the results from one of the holiday-themed Stefon Mad Libs I played around with. 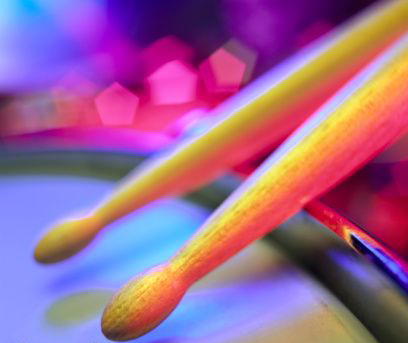 This week, Late Show with David Letterman is presenting its first-ever "Drum Solo Week," a series of shows in which Paul Shaffer and the CBS Orchestra will put the spotlight on legendary drummers and percussionists like Sheila E., Roy Haynes and the CBS Orchestra's own Anton Fig. Because of "Drum Solo Week," it's time to revisit a killer two-minute drum solo that opens "Come Maddalena (Like Maddalena)," a cue from Ennio Morricone's lush score to Maddalena, an obscure 1971 Italian art-house movie in which, according to IMDb, Lisa Gastoni "takes the title role in uninhibited, full frontal nudity fashion" and falls in love with "a priest in doubt over his vocation." I've never seen Maddalena--I assume it's like The Thorn Birds, but without that creepy "he first knew her when she was a little girl" thing.


The soloist at the start of "Come Maddalena" is Morricone's frequent drummer during the '60s and '70s, Vincenzo Restuccia. His terrific drum work is also the highlight of "L'Ultimo," a Morricone instrumental that first appeared on the 1970 album Ideato, Scritto e Diretto da Ennio Morricone and was, according to a page about the 1970 LP, "composed for an unrealesed [sic] film whose title has been forgotten by Morricone himself." (I wonder why Danger Mouse and Daniele Luppi didn't hire Restuccia as their percussionist during the recording of their Rome homage to '60s and '70s Italian film scores. Restuccia would have been perfect for that project.)

The groovetastic "L'Ultimo" sounds like something Marcello Mastroianni would have played in his convertible while driving around 1969 Rome with his 10th Victim stunna shades on.