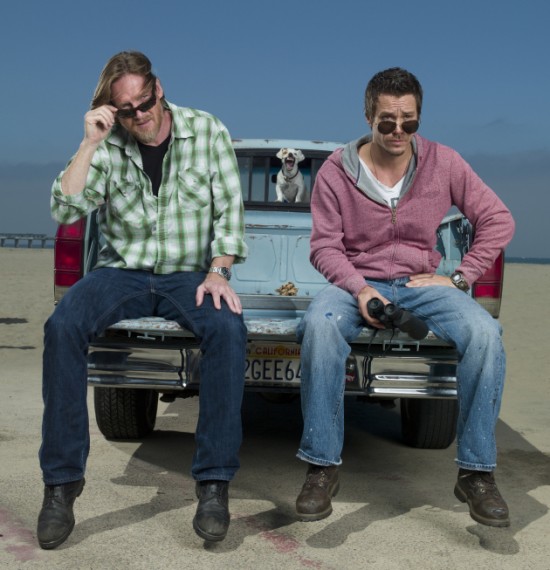 At comments sections and message boards about Terriers, FX's new San Diego-based series starring Donal Logue as a tenacious ex-cop-turned-unlicensed private eye and Michael Raymond-James as his equally tenacious ex-con partner, the show's viewers have constantly asked, "What is that catchy theme song? I've been whistling it all day long even though the co-worker next to me gives me this look that says 'urge to kill rising.'"

The tune is an original piece called "Gunfight Epiphany," written and performed by Terriers score composer Robert Duncan, who also wrote the opening title themes for Terriers producer Shawn Ryan's previous show The Unit and Castle (as well as the music during a hilarious score-related gag from Castle's first season). The iTunes Store released an extended version of "Gunfight Epiphany" today. (An A.V. Club commenter who prefers the Terriers theme's earlier title "Steel Neena" remarked that "Gunfight Epiphany" makes it sound like a Mars Volta B-side.)

As a fan of The Rockford Files and Veronica Mars, I've been loving the hell out of this show, a superb beach noir in the vein of Rockford and Mars. Like those two shows, Terriers skillfully balances smart-ass humor with pathos and to borrow the words of Vulture's Emily Nussbaum, "takes its characters' moral lives seriously, without ever being pompous." The creation of Ocean's Eleven and Matchstick Men screenwriter Ted Griffin, Terriers is also the sole gem in what has been an unexceptional fall TV season.

Unfortunately, Terriers has been doing so poorly ratings-wise (Mars had this problem too--why is the P.I. genre ratings Kryptonite?) that Logue and Raymond-James have embarked on a cross-country tour to spread the word about their show and host episode screenings for college campus audiences. As a show of support for Terriers, I'm adding "Gunfight Epiphany" to daily "Assorted Fistful" rotation on A Fistful of Soundtracks.

Oh, and watch Terriers Wednesday nights at 7 Pacific (10 Eastern) 10 (7 for West Coast DirecTV viewers like myself) on FX. It's far greater than its misleading (and as Logue has admitted in interviews, poorly chosen) title would have you believe.
Posted by J. John Aquino at 5:15 AM 2 comments: 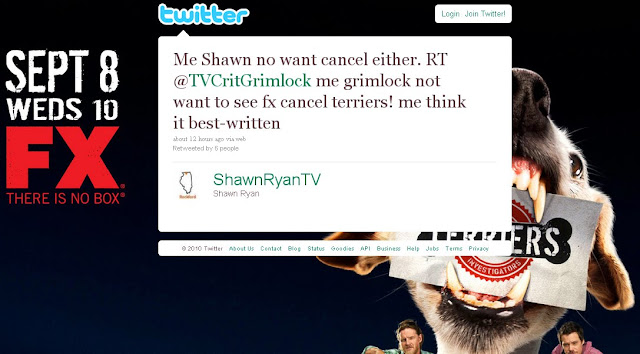 Shawn Ryan--creator of The Shield and Fox's upcoming Ride-Along The Chicago Code and producer of what has to be my favorite new fall show, the FX private eye drama Terriers--retweeted TV Critic Grimlock last night, and as a result, Grimmy's followership, which has been as tiny as his arms, experienced a wee bit of a spike. Congratulations, Grim!
Posted by J. John Aquino at 9:30 AM 1 comment:

Most first-season Human Target episodes featured music performed by a 60-piece orchestra (McCreary upped it to 94 for the "Christopher Chance" season finale that guest-starred Armand Assante, Amy Acker and Lee Majors as a predecessor to Valley's title hero, an assassin-turned-bodyguard). This made McCreary's orchestra the largest group of musicians assembled for a TV series in years, a huge leap from the 30-piece orchestra McCreary often conducted on Galactica, the 29-to-34-piece orchestra Shirley Walker and her team of composers led during another made-for-TV DC Comics adaptation, Batman: The Animated Series, and the 37-piece one Michael Giacchino assembled for Lost.

"At the first production meeting we had, even before the pilot, I said we must have an orchestra," said Human Target's first-season showrunner Jonathan E. Steinberg in the press release for this month's Human Target soundtrack release. "This show is about an action hero, it's built out of the DNA of the movies I grew up on, Star Wars and Raiders and Star Trek. Those movies don't work without that orchestra."

Human Target, which debuted on Fox as a mid-season replacement last January, will return to the Fox lineup in mid-November (the season premiere was originally scheduled to air earlier this month--that's why the soundtrack release was slated for October--but the network postponed the premiere). However, Steinberg and McCreary didn't return for the second season. Matthew Miller, a writer/producer from Chuck, replaced Steinberg as showrunner, brought along Chuck composer Tim Jones and plans to insert into Human Target more Chuck-style "needle drops" (slang for existing songs), to the delight of a Human Target fan who said in HitFix.com's comments section that "I absolutely hate needle drops. I also love Bear McCreary's music. Human Target in its first season was a great callback to the silly shows of my childhood--The Fall Guy, The A-Team, etc. I don't like Chuck, and I don't like any of these proposed changes. I won't be tuning in for Season 2."

On his blog, McCreary explained his exit by saying "the series is now under new creative leadership, and as a result I have not been asked to return... We are likely to hear a very different musical approach to Human Target season 2, but I hope and trust the series will remain a fun adventure." 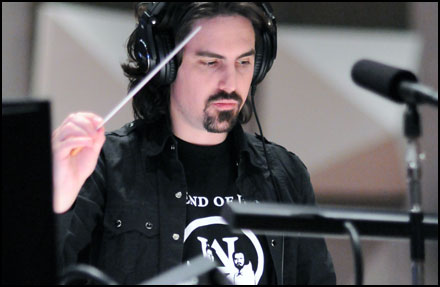 McCreary's departure is a disappointing development for fans of the show's Emmy-nominated first-season music like myself, but luckily, McCreary, who's currently busy juggling AMC's The Walking Dead and the Syfy shows Caprica and Eureka, has assembled a whopper of a Human Target soundtrack release. WaterTower Music's digital release of the Human Target soundtrack consists of 160 minutes of McCreary's music from the show, while La-La Land's physical version of the soundtrack on October 19 will contain even more music and encompass three discs. 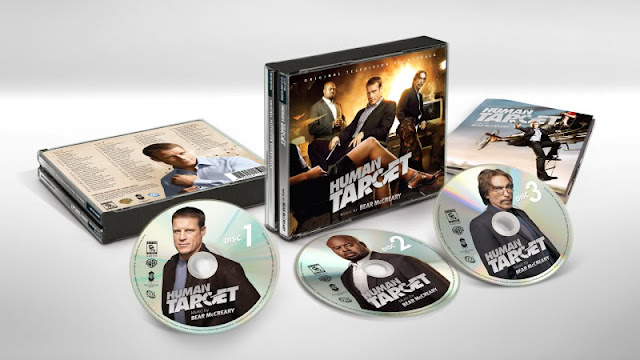 I've added my favorite tracks from the Human Target album to daily "Assorted Fistful" rotation on the Fistful of Soundtracks channel. During one of these standout tracks, "The New Christopher Chance" from last season's cliffhanger, you can hear what Steinberg had in mind when he said his version of Human Target was built out of the DNA of Star Wars and Raiders. "The New Christopher Chance" contains "Katherine's Theme," a romantic motif McCreary wrote for Acker's character. The sweeping theme brings to mind both Han and Leia's Empire Strikes Back love theme and "Marion's Theme" from Raiders.

Tune into A Fistful of Soundtracks to get your Human Target music fix while you wait another few weeks for Jackie Earle Haley to come back and abuse the word "dude."
Posted by J. John Aquino at 1:00 PM 2 comments:

TV Critic Grimlock is the new definitive voice of TV criticism, so move over, Tom Shales--that is if you can move that hefty ass of yours

In just 50 or so tweets, Grimlock the Dinobot has emerged as a new insightful voice in the often stuffy and annoyingly middlebrow field of TV criticism. Nobody--not even the witty recappers over at the Onion-owned A.V. Club or the refreshingly not-so-stuffy, comic book-loving Alan Sepinwall--has enlivened coverage of the new fall TV season quite like the belligerent tyrannosaur has:

"me grimlock not into unfunny nbc sitcom outsourced. me wish that call center get torched by mumbai gangsters in final episode." (Wednesday, October 06, 2010 11:45 AM)

I haven't been this riveted by the thoughts of a writer who's discussing TV since the time Armond White implied he wanted to spoon with Keller from Oz.

So what if TV Critic Grimlock, who launched his Twitter page with my help last Sunday (@TVCritGrimlock), has only one follower? Some talented writers are at their most interesting when they're a best-kept secret--or before they jump the shark, to borrow a TV-related phrase that, now that I've finally thought about it, is kind of as tiresome a term as "BFF" or "bromance."

From the Autobot homebase known as the Ark, Grimlock took some time out of his busy TV-watching schedule to discuss the fall season and the animosity towards Optimus Prime (and Dinobot teammate Slag and anyone who's a Decepticon) that occasionally seeps into his tweets, which always look e.e. cummings-esque because Grimlock doesn't quite understand the purpose of the Caps Lock key. To make this Q&A less irritating to read, all of Grimlock's words have been properly cased.