"It might be malig-nant": When good actors pretend to be crappy ones 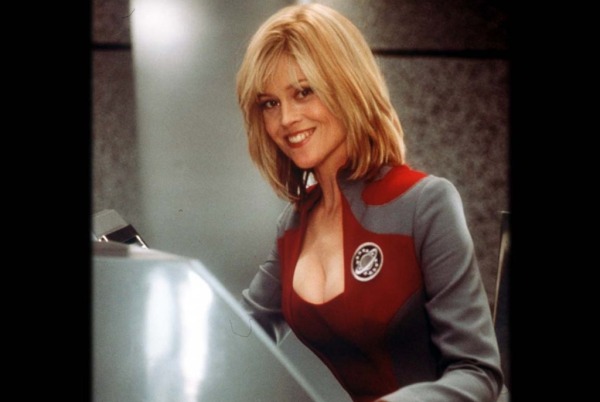 The breakout performance in last spring's little-seen, wildly funny indie movie The TV Set belongs not to its star, recent Golden Globe winner David Duchovny (although in The TV Set, he's pitch-perfect as a frustrated Hollywood scriptwriter), but to an unknown actor named Fran Kranz.

Loosely based on writer/director Jake Kasdan's own experiences in the TV industry, The TV Set (which I recently Netflixed) mocks everything that's wrong with the business today, from network interference--which Kasdan had to deal with while working on one of my all-time favorite cult shows, Freaks and Geeks--to the rise of reality TV to the power trips of self-absorbed, needy actors from scripted shows. Kranz (pictured below) plays one such self-absorbed, needy actor, the fictional Zach Harper, the scenery-devouring star of The Wexler Chronicles, yet another legal drama about a young lawyer in love with the one that got away (a network exec is overheard describing The Wexler Chronicles as "a little Northern Exposure, a little Ed," but the show looks more like Ed meets October Road meets Ally McBeal, except without the lame peeks into Ally's brain).

In one of The TV Set's funniest moments, Duchovny--whose writer character is The Wexler Chronicles' showrunner--watches in horror on the show's set as the inexperienced Harper overplays the anger during a subdued dramatic scene in which the show's hero has to mourn the death of a loved one. I haven't seen any of Kranz's prior work (he'll next be seen as the lead in an actual show, the CBS midseason replacement Welcome to the Captain), so I don't know how good of an actor he really is outside of The TV Set, but his humorous turn as an overemotive ham is already one of my favorite performances in which a decent or excellent actor portrays a far less talented version of himself or herself. Here are some of my other favorites.

Derek Jacobi, Frasier ("The Show Must Go Off")
The celebrated British thespian deservedly won an Emmy in 2001 for his hilarious guest shot as Jackson Hedley, a mash-up of William Shatner and future Frasier guest star Patrick Stewart. The episode involves the Crane brothers' reunion with Hedley, a stage acting mentor who introduced them to Shakespeare when they were kids. Because Frasier and Niles are elitist snobs, they're more familiar with Hedley's Shakespeare work than with his signature role, as the android sidekick on Space Patrol. The brothers are appalled to discover their acting idol has been reduced to a Galaxy Quest-like, post-show career of "hawking T-shirts and sci-fi gewgaws," so in another one of their misguided business ventures, they attempt to rescue Hedley from the sci-fi con circuit by bankrolling his stage comeback. But Frasier and Niles become even more horrified when they watch Hedley rehearse and realize maybe he isn't as great a thesp as they thought he was. Unfortunately, YouSued doesn't have any clips of this standout Frasier ep, so to give you a good idea of Hedley's atrocious delivery, think Dr. Orpheus from The Venture Bros. suffering from diarrhea--and if he had taken elocution lessons from Jon Lovitz's Master Thespian. Speaking of Galaxy Quest...

Sigourney Weaver, Galaxy Quest
Weaver's character is a biting spoof of the uselessness of the secondary actors on certain shows that carry titles that rhyme with "car wreck." The fourth-tier actress Gwen DeMarco had two functions on her old show: to serve as eye candy and to repeat whatever the spaceship's computer said. In director Dean Parisot's 1999 sleeper--a better Star Trek movie than the last two official ones--DeMarco amusingly undoes everything that Weaver worked to accomplish as the iconic Ellen Ripley, one of the fiercest female characters to ever spearhead a sci-fi franchise. Well, almost everything. The little-seen Galaxy Quest 20th Anniversary Special mockumentary--an uproarious Sci-Fi Channel tie-in that was stupidly left off the Galaxy Quest DVD--suggests that DeMarco's limited Tawny Madison role had some merits. The mockumentary discloses that Tawny's trademark karate kick (a nod to both Emma Peel and Erin Gray's Buck Rogers hottie, Col. Wilma Deering) inspired a whole generation of blond-wigged female "Questarians" to imitate the Galaxy Quest communications officer's fighting moves, and that maybe Tawny was a better role for DeMarco than the one she turned down, "a small part in a Woody Allen movie" (a sly reference to Weaver's appearance in Annie Hall).

Alec Baldwin, SNL "Soap Opera Digest" sketch
In a 1993 sketch that's funnier than his most popular SNL bit, "Schwetty Balls," Baldwin delves into his soap opera acting past (The Doctors, Knots Landing) to play Trent Derricks, the star of Doctors, Nurses and Patients. Actually, Derricks isn't that bad of an actor. That is if you overlook his tendency to give interesting pronunciations to medical terms ("We believe it might be a pole-yip. It might be the Big C: canker! It might be benig. It might be malig-nant.") and names of Ivy League universities ("There's no class at Yeah-leh Medical School that can prepare you for this!"). (The sketch can be found on the SNL: The Best of Alec Baldwin DVD.)

Alec Baldwin, 30 Rock ("Jack-Tor")
I know it's Baldwin again, but the guy just excels at pretending to be a subpar actor, or in the case of Jack Donaghy, a network exec with no clue about how to say a simple line or two in front of a camera. Lorne Michaels, whose company produces 30 Rock, must really be good-humored about himself because the "Jack's outtakes" montage in this ep is clearly star/showrunner Tina Fey's jab at Michaels' stilted cameos on SNL.

Any of the actors who played Jack Horner's porn stars in Boogie Nights
Almost everyone has a favorite moment from Boogie Nights. Heather Graham stripping to nothing but her roller skates. The shout-out to I Am Cuba. >Mark Wahlberg mangling that cheesy theme song from The Transformers: The Movie. The drug deal-gone-bad sequence. The end credits--for those of you with a weak bladder. For me, it's Graham stripping to nothing but her roller skates. Coming in a close second is any of the footage from Jack Horner's movies-within-the-movie, in which we glimpse the genesis of John C. Reilly's dimwitted comic personas ("Let's get some of that Saturday night beaver..."). Amber Waves' stilted delivery right before her first sex scene with Dirk Diggler always amuses me. Julianne Moore is a whiz at portraying vacant-eyed starlets like Amber. The character has never quite left Moore: a little bit of Amber seeped into a surprisingly funny SNL Ladies Man sketch in which Moore appeared as a ditzy spokesmodel, as well as into her Cookie's Fortune character, an amateur actress who participates in a cheesy production of Salome at the local church.
Posted by J. John Aquino at 1:06 AM No comments:

Does Walter Murch ever watch The Wire? 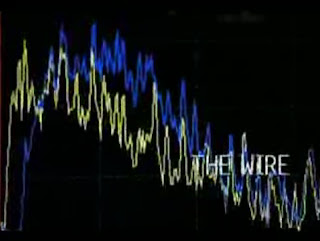 One particular element of The Wire--my favorite show--that I love as much as the writing, the acting and music supervisor Blake Leyh's choices of diegetic music is the textured sound design. It's an often unheralded element that's as integral to the show as the novelistic writing (authors like Richard Price and George Pelecanos are part of the writing staff) and the continuity callbacks (the recovering addict at the Narcotics Anonymous meeting who spoke about turning tricks for a fix during the teaser of this week's episode is the same wealthy white lady who was briefly seen buying drugs in Hamsterdam two seasons ago and then showed up again as a hooker at a convenience store/stash house in season 4--and in another nifty bit of Wire trivia, she's played by Price's actress daughter, Genevieve Hudson-Price).

The Wire's attention to detail also involves the selection of background noises (police sirens, dog barks, stereos blaring DJs from "92Q," an actual Baltimore hip-hop/R&B radio station). I hate to use the "it's like you are there" cliché, but those five words best sum up how the series captures the sounds of city life. Walter Murch's groundbreaking sound design for Francis Ford Coppola's The Conversation clearly influenced The Wire's sound department, especially during season 1, when the show was at its most Conversation-esque (the first year focused on the Baltimore Major Crimes Unit's surveillance of the Barksdale crime family).

To borrow the tagline from the show's season 1 promos, "listen carefully" to the background chatter during the scenes on West Balto's corners. A clever running joke on the show is the ripped-from-the-headlines names the Bodymore pushers (a.k.a. "hoppers") give to the drugs they sell. During season 3--when the Hamsterdam storyline served as a critique of Bush's war on terror--the hoppers in Hamsterdam could be heard hollering, "I gotcha WMDs!" (Other examples of background hopper lines from the season 3 corner scenes: "Pandemic!" and "I got them red-tops! Red-tops!" "Red-tops" is lingo for cocaine vials--anyone who's got Ghostface Killah's "Kilo" in their iPod knows that--while "WMDs" means heroin. I don't know what "pandemic" refers to.) In the season 5 premiere that aired two weeks ago, the WMDs have been replaced by "greenhouse gas."

The sound designers went crazy during this pivotal sequence from season 3:


The Wire has already spawned two soundtrack CDs. Too bad there won't be a Wire sound effects CD. I'd buy that too in a heartbeat.
Posted by J. John Aquino at 8:42 PM No comments: 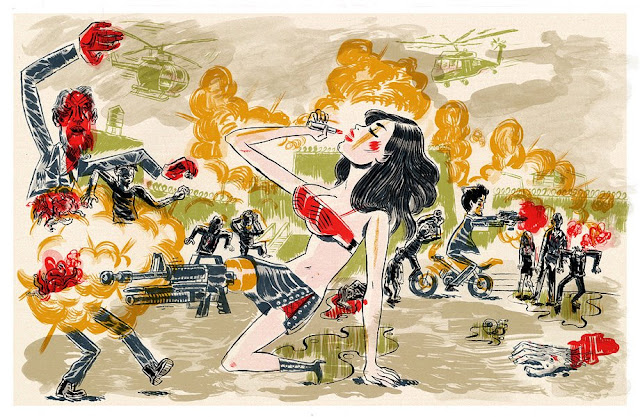 While Googling for The Megalomaniacal Spider-Man the other day, I stumbled upon this artist's site and his "DVD Series," a bunch of awesome illustrations of Lost season 3, Purple Rain, Casino Royale, Idiocracy, Planet Terror and Reno 911!, to name a few.

The brilliant artist's name is Mike Reddy. Keep an eye on this guy's work. He's also done album artwork for the Fiery Furnaces.

I want his portraits of Lost and Planet Terror to adorn one of the walls in my new condo. Right now, the bare walls and minimal furniture make my crib look like De Niro's house in Heat--but without Dante Spinotti's knack for making an empty living space look cool. 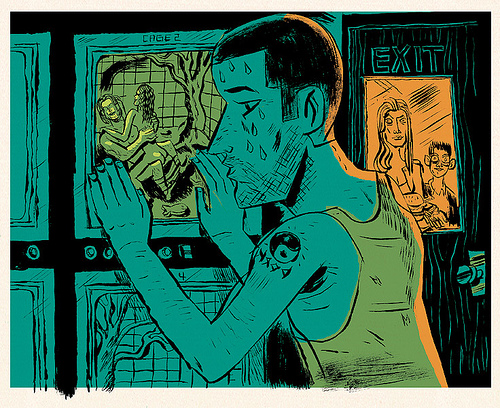 It's doubtful we'll ever see Evangeline Lilly's buns on Lost, but thanks to Mike Reddy, we get to see them now. Sort of. 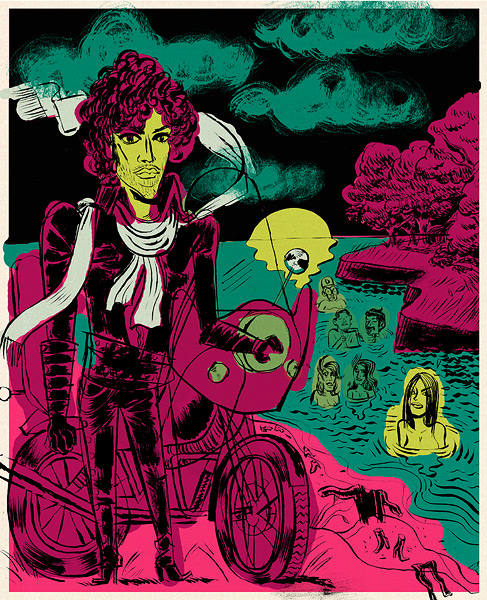 "You have to purify yourself in the waters of Lake Minnetonka." 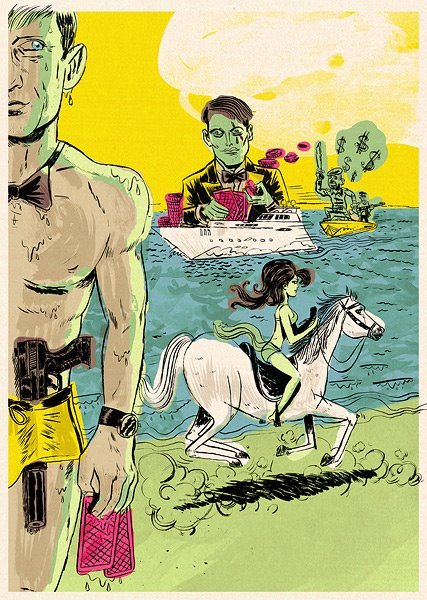 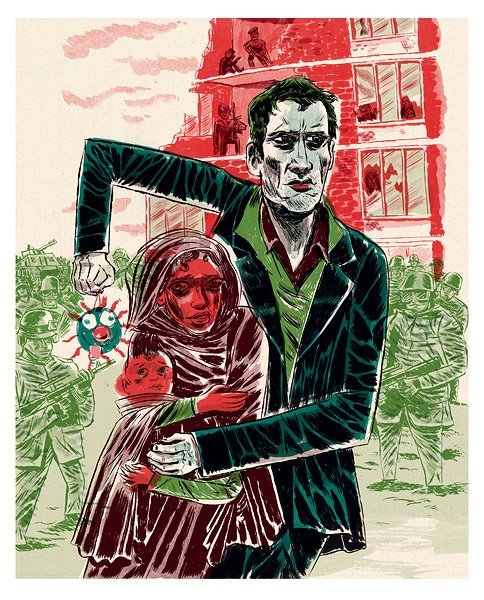 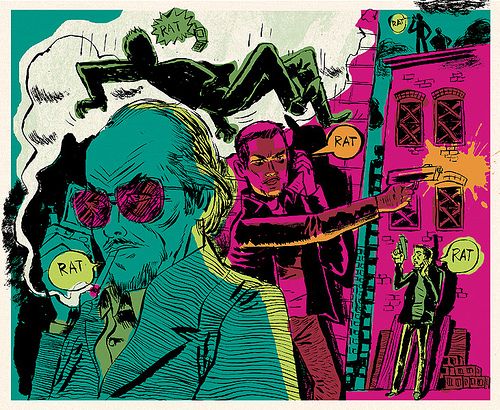 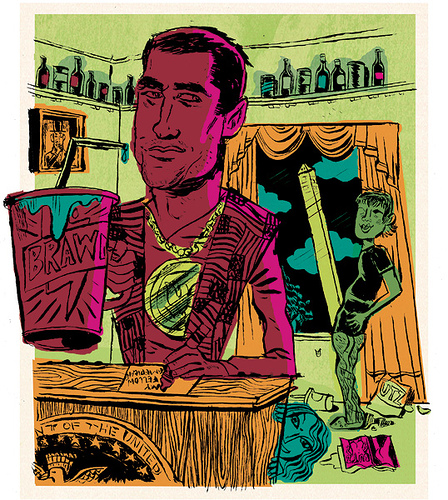 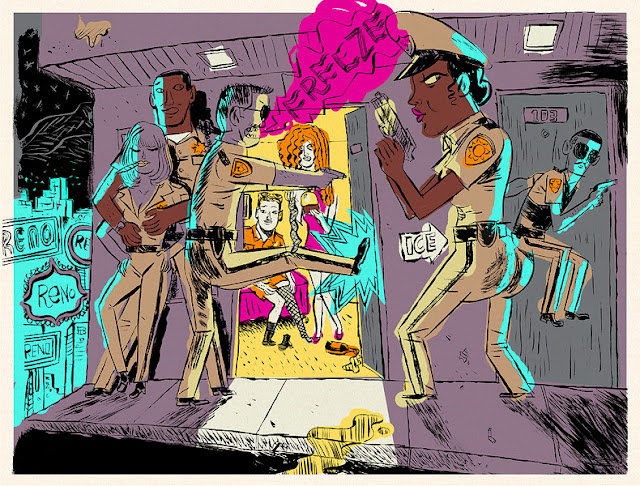