I'm back for one post only to plug my first book, If You Haven't Seen It, It's New to You 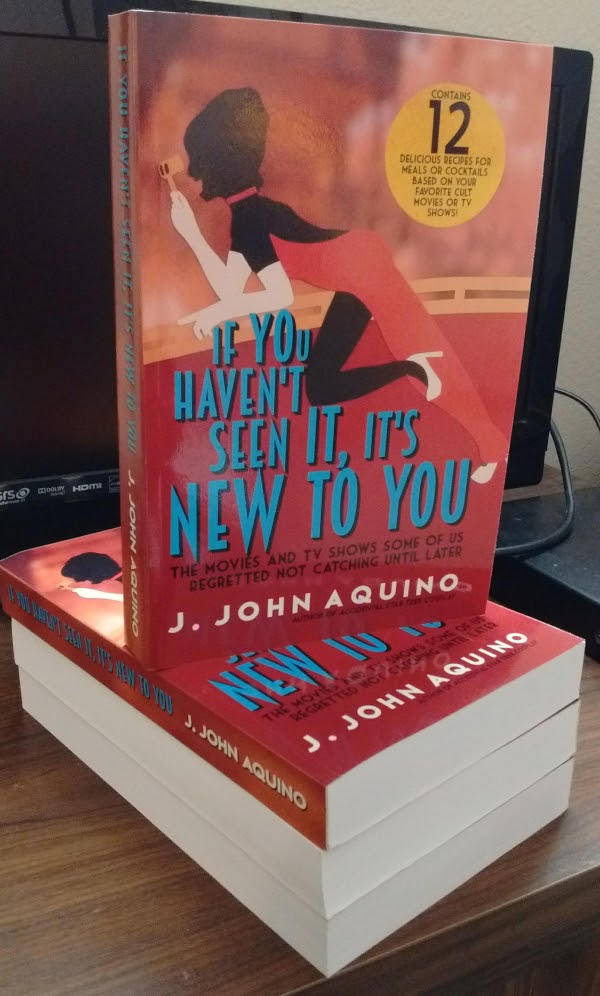 So much shit has happened since the time I wrote my final blog post here in 2017. A pandemic that's killed so many. The current and upsetting rise in hate crimes against Asian Americans. An unfortunate wave of anti-Black police violence. The worst American president in my lifetime. (His final three years in Washington were responsible for tons of terrible shit, including the mishandling of the pandemic, the aforementioned rise in anti-Asian hate crimes, concentration camps full of immigrant kids, and a white supremacist insurrection at the Capitol.) The climate crisis. My mother's stroke symptoms. (Her condition led to me gradually moving back to my parents' house to help my father take care of her, as well as to stay safe from the dual dangers of COVID and MAGAt dumbfucks who want to kill me because they think I'm Chinese. I still haven't even finished the process of moving yet, mostly due to a wintertime lockdown in the Bay Area.)

And yet in the midst of those messy three years full of countless (and sometimes stress-inducing) distractions, I was somehow able to write and publish my first book.

The new book is why I've briefly returned to this blog, despite saying farewell to the blog in 2017, to promote it. (Even though I don't write posts anymore for this blog, I still come back to Blogspot from time to time to remove from my blog any dead links or dead embeds for videos that were deleted from YouTube.) If You Haven't Seen It, It's New to You: The Movies and TV Shows Some of Us Regretted Not Catching Until Later ($14.99 in B&W paperback form or $9.99 in e-book form and available only on Amazon) came about because, after I was fired from a coding job I grew to hate, I was unable to find another job for eight years, so I gave up on the job search and kept myself busy by writing content for both this Blogspot blog and the Tumblr blog Accidental Star Trek Cosplay (a blog I continue to update and post content for because it has always been a much less time-consuming and stress-inducing blog, and it also has way more readers than this one did). But I got sick and tired of writing long-form blog posts and online articles for free, so in 2017, I quit this Blogspot blog and vowed to myself that I would never again write for free anything that's long-form. (This long-form post to plug If You Haven't Seen It, It's New to You is an exception.) I wasn't ready to start a Patreon or a Ko-fi to earn some money, so I decided instead to write and self-publish a book. (I was also tired of getting rejected every time I pitched a short story idea to an editor or tried to get a writing job. That's why I've gone the self-publishing route.) At first, the book was supposed to be a comedic sci-fi novel, but then a little something called writer's block got in the way.

After three failed attempts at writing novels, I chose to do a non-fiction book instead. I began working in May 2018 on the book that evolved into If You Haven't Seen It, It's New to You. I took a few of my blog posts about watching older movies for the first time and did updated or expanded versions of those posts while surrounding them with tons of completely new material. The new stuff in If You Haven't Seen It, It's New to You includes essays on Lawrence of Arabia, Playtime, Blue Thunder, Near Dark, The Heroic Trio, MTV's Daria, Guillermo del Toro's Hellboy movies, and Schitt's Creek.


If You Haven't Seen It, It's New to You took me two years to write and self-proofread. From November 2019 to October 2020, I was either proofreading the book by myself or making lots of minor tweaks to the book's longest chapters, like a chapter in which I discussed watching seven of the eight Harry Potter movies for the first time. (Yeah, that became a particularly interesting chapter to rewrite during J.K. Rowling's transphobic meltdown.) November 2019 to October 2020 will go down as a really unusual year for me (just as how it was an unusual year for everyone who survived it): In addition to finishing work on my first book, I was dealing with life during COVID while acting as a caregiver to a parent and learning more about how my deep hatred of certain sounds like leaf blower noises is the neurological condition known as misophonia.

Despite having a lot on my plate in 2020, If You Haven't Seen It, It's New to You is finally out, and it's the type of book a Filipino American film nerd like myself has always wanted to see out there: a book written from a point of view that just does not get a lot of representation in journalism or publishing simply because there aren't a ton of Filipino American writers who write about film or TV. I was a fan of the YouTube channel National Film Society, which Patrick Epino and Stephen Dypiangco founded to give voice to Filipino American film nerds like themselves (the channel went inactive for a couple of years, but it came back in 2018 without Stephen as a co-host), and I always thought Patrick and Stephen should have put out a book about film. I would have bought such a book in a heartbeat.


So why should you buy If You Haven't Seen It, It's New to You, even though the "I was late to the party regarding this popular movie or TV show, and here's what I think of what I finally watched..." thing has been done to death by film discussion podcasts and pop culture blogs? First of all, the book gives a spotlight to the same type of underrepresented voice that makes National Film Society's videos stand out on YouTube. Second, despite the book's length (462 pages), it's irreverent and full of humor, and during a time when COVID has confined you to staying home and watching lots of streaming services with so much fucking content, you need a guide like my book to simplify your search for content and direct you to movies and shows you missed out on before COVID and now have probably become curious about while in lockdown.