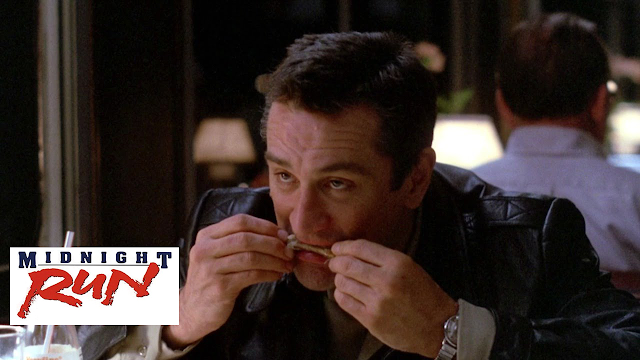 On July 20, 1988, Universal released Robert De Niro and Charles Grodin's Midnight Run. It didn't make much of a splash at the box office--although it was popular enough to spawn a series of Midnight Run TV-movies with Happy Gilmore villain Christopher McDonald in the De Niro role--and in the 25 years since its release, the De Niro/Grodin cross-country road movie has received far less ink than either summer 1988's sleeper success story, the original and unsurpassed Die Hard, the subject of so many "Die Hard is 25!" listicles in the last few weeks, or summer '88's other cinematic success story, the still-amazing-looking blockbuster Who Framed Roger Rabbit.

Yet I find myself rewatching Midnight Run more often than Die Hard or Roger Rabbit. Why is that? 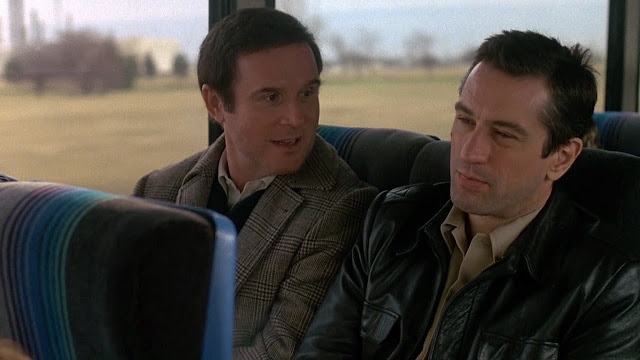 Sure, Die Hard contains far more impressive action sequences, and the humor in that classic Bruce Willis action flick was handled so perfectly (as was the humor in Roger Rabbit). But I'll always be drawn more to Midnight Run's De Niro/Grodin banter (Grodin: "Why would you eat that?" De Niro: "Why? 'Cause it tastes good.") and its lengthy bits of improv, something that director Martin Brest (who, at this point in his strange career, was a long way from the fiascoes of Meet Joe Black and Gigli) carried over from his earlier hit Beverly Hills Cop, presumably from seeing how energized his 1984 film became from the ad-libs of Eddie Murphy and Bronson Pinchot. Years before improv became an integral part of Judd Apatow-produced hit comedies like Bridesmaids, De Niro, as crafty bounty hunter Jack Walsh, and Grodin, as Jonathan "The Duke" Mardukas, a dorky bail jumper and white-collar criminal who turns out to be a lot craftier--and braver--than the burnt-out Jack, ad-libbed several of their scenes together and most of the brilliantly underplayed "Litmus Configuration" sequence.

Of course, Midnight Run didn't invent the wheel--before Brest made Beverly Hills Cop and Midnight Run, Robert Altman films were always full of improvised dialogue--but the dialogue and expressions that resulted from playing things by ear while the cameras rolled are consistently funny during Midnight Run (the chemistry between De Niro and Grodin helps a lot too). Each time I rewatch an ad-libbed De Niro/Grodin moment, I always notice something new and amusing, whether it's Jack nervously bumping into Mardukas while the Duke poses as an FBI agent during his "Litmus Configuration" scam to get money for groceries or a simple expression from a non-actor who's part of their scene (during the "chorizo and eggs" scene, peep the nervous look on the diner waitress who's clearly a non-actor).

In his think piece about Die Hard's 25th anniversary (by the way, that summer also gave us Big, Coming to America, A Fish Called Wanda and Bull Durham), RogerEbert.com editor-in-chief Matt Zoller Seitz noted that John McTiernan's film surrounded Willis with a bunch of terrific supporting players ("McTiernan and his credited screenwriters Steven E. DeSouza and Jeb Stuart stuff every nook and cranny with beguiling little character touches," wrote Seitz, who mentioned the classic bit of comedic business where a candy bar gets stolen by ubiquitous '80s stuntman Al Leong--soon to be experiencing a bit of a career resurgence, by the way, as a cast member in National Film Society's upcoming Awesome Asian Bad Guys web series). Midnight Run's supporting players are equally terrific, and most of these character actors are familiar faces from various crime movies and shows.

As Alonzo Mosely, the dyspeptic FBI agent whose badge and identity get stolen by Jack, Yaphet Kotto deserved some sort of award for "Outstanding Achievement in Comedic Acting During a Role with Minimal Dialogue." It's an entertaining performance, but Kotto's dourness was apparently real. He reportedly didn't enjoy shooting Midnight Run, due to both a fever he caught and weariness from Brest's insistence on multiple takes. As the much more chatty Jimmy Serrano, the ruthless Vegas mobster the Duke embezzled millions from to give to a good cause, after realizing he was managing the accounts for a mobster (I guess the words "waste management" weren't enough of a hint for the Duke), Dennis Farina is endlessly quotable, whether he's berating his always-rational attorney (Philip Baker Hall) or the incompetent underlings (mob genre fixtures Richard Foronjy and Robert Miranda) he's sent to rub out his former accountant ("Is this moron #1? Put moron #2 on the phone."). Because Farina worked as a cop in Chicago before he became an actor, I wouldn't be surprised if some of the criminals he encountered in Chicago formed the basis for his performance as Serrano.

Also twisting the word "fuck" through many sorts of imaginative, George Gallo-scripted iterations (the inactive site Listology counted 132 F-bombs during Midnight Run, just one F-bomb above De Niro's later film Jackie Brown) are Joe Pantoliano as the slimy L.A. bail bondsman who assigns Jack to deliver the Duke and John Ashton as Dorfler, a rival bounty hunter with a walnut for a brain. I hate the term "movie magic," but that's exactly what ensues when these character actors are thrown together on-screen or when De Niro and Grodin are either winging it--the improvised dialogue makes Jack and the Duke's growing friendship feel more natural than most other buddy flick pairings I've been subjected to--or helping to elevate Midnight Run from being a disposable buddy flick during their more dramatic moments. Midnight Run pulls off the shifts in tone from comedic to dramatic more seamlessly than most big-screen comedies that attempt to do so. Community creator and on-and-off-and-on-again showrunner Dan Harmon has cited the comedic timing in Midnight Run as an influence on his show. Harmon also seems to have been influenced by the film's skillful juggling of humor and seriousness. Many of Community's strongest episodes juggle the two as effectively as Midnight Run does.

Jack and the Duke are such well-drawn and likable characters I could spend more than 126 minutes watching them interact, and yet, I still don't want to see them in a sequel at all. A sequel reuniting De Niro with the semi-retired Grodin, a project that Brett Ratner threatened to direct last year, remains a colossally terrible idea. Remember The Odd Couple II, which Jack Lemmon and Walter Matthau made together 30 years after the first Odd Couple feature film? Yeah, I'm not looking forward to a repeat of whatever the hell The Odd Couple II was.

And what sort of implausible circumstance would bring Jack and the Duke back together? The way things ended between them at LAX--Jack and the Duke part ways, then Jack turns around to say one more thing to the Duke, but the Duke's already vanished--was perfect.

Read more after the jump>>
Posted by J. John Aquino at 1:30 PM No comments: