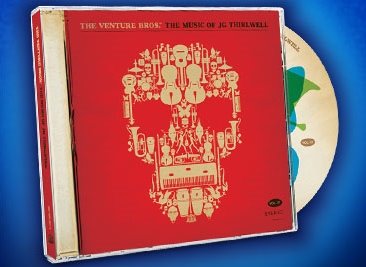 Here's some good news for budget-conscious Venture Bros. fans like myself who want avant-garde composer J.G. Thirlwell's Venture Bros. score album but don't intend to buy either the Blu-ray release of the third season (which, unlike the DVD release, will include the album as an extra) or the vinyl version of the album. Williams Street Records will make The Venture Bros.: The Music of J.G. Thirlwell available on its amusingly retro site (which spoofs the primitive designs of sites like the ones Veronica Belmont and Ryan Block blog about on The Vintage Web). The label will begin shipping the CD on March 24.