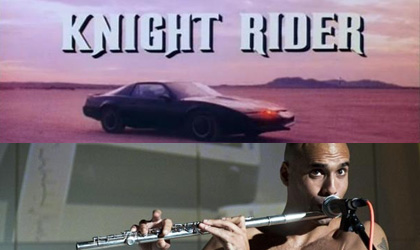 Like According to Jim, Knight Rider is a show that just won't die. It's been revived five times: three times in TV-movie form and twice as a weekly series. Not even the presence of the hot Smith Cho from Ping Pong Playa could get me to watch the latest attempt to revive Knight Rider, which everyone agrees was an epic fail.

Knight Rider is an example of Not-So-Great Show, Killer Theme, even though the banter between the Hoff and his lover sidekick KITT made it more enjoyable than most old Glen A. Larson shows. Like on all other Larson shows, the theme was co-written by Larson, who used to sing in the '50s and '60s with an SCTV Five Neat Guys-ish group called the Four Preps, and his regular composer Stu Phillips.

Beatmakers and beatboxers can't get enough of the Knight Rider theme, as evidenced by the year when Busta Rhymes and Timbaland & Magoo both dropped remixes that sampled the theme, as well as Panjabi MC's "Mundian to Bach Ke (Beware of the Boys)" and this sweet little recent cover by Nathan "Flutebox" Lee, whom I first caught on Current TV earlier today (Googling him led me to his Knight Rider theme cover).