Throughout this year, I'm posting older material--like non-Blogspot stuff from a few years ago, unpublished writing I've kept buried in my computer and transcripts of interviews from A Fistful of Soundtracks' terrestrial radio years.

Here's another one from my archives, an alternate version of a 2006 plug for Jim Gaffigan, who's gotten me hooked on bacon again, and whose latest Comedy Central special, King Baby, premieres this Sunday night. 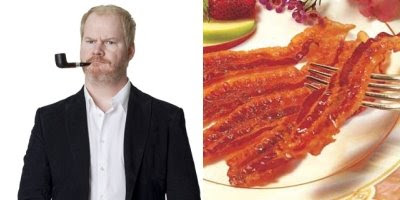 Like other observational comics, Gaffigan fixates on food, but not on exhausted food-related topics like peanuts, Taco Bell or that other '80s classic, Grape Nuts ("What is the deal? It's neither a grape nor a nut!"). His favorite punching bag is Hot Pockets, which are like calzones if they were made by a crackhead and come complete with a jingle that makes "By Mennen!" sound like Kid A ("Hoooot Pocket!").

Gaffigan frequently beats up on his own appearance, like another self-deprecating paleface, Conan O'Brien. He's turned his whiteness into the key gag for a series of cheapo and very funny superhero cartoon spoofs created for Late Night with Conan O'Brien. In Pale Force, a buffed-up Gaffigan and his cowardly sidekick Conan (both voiced by Gaffigan) strike fear into the hearts of evildoers with their pale skin and laser-firing nipples. The next episode of Pale Force ought to be a celebrity deathmatch between the melanin-challenged men of steel and those albino twins from The Matrix, with Powder as the referee.

In an avclub.com interview, Gaffigan said he doesn't curse anymore onstage. "Clean stand-up comedy" are three words that often scare people away, though not as badly as "Kevin Federline rapping." What's unique about Gaffigan is that he got funnier as he did away with the profanity, which is like Richard Pryor in reverse. At about the same time as the F-words vanished, he developed a falsetto "inner voice" character--an unamused, prissy female audience member commenting on Gaffigan's jokes. It's become an audience favorite. With his clever riffs on junk food, religion and Tom from MySpace-style yellow fever ("I only dated one Asian girl, but she was very Asian. She was a panda"), Gaffigan proves that curse-free observational humor doesn't have to suck like, well, a Hot Pocket.
Posted by J. John Aquino at 2:30 AM