Batman: Mask of the Phantasm score to get expanded reissue from La-La Land 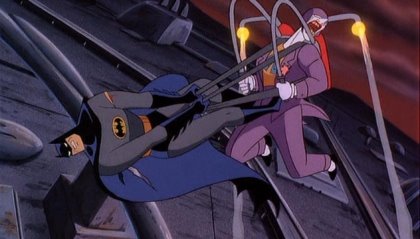 Dammit, soundtrack labels, you need to stop releasing so many terrific score albums. My depleted-by-the-recession savings account can't take it.

I caught the following exciting bit of soundtrack news on the FSM Board:

BATMAN: MASK OF THE PHANTASM - score by Shirley Walker. This is the first release in our new line of EXPANDED ARCHIVAL EDITIONS. This cd features the complete score along with a few bonus tracks. It is limited to 3000 units. Retail Price: $19.98

And while we're at it, can we also get a Mask of the Phantasm special edition DVD with a remastered picture and a Batload of extras, like an Alan Burnett/Bruce Timm/Eric Radomski/Andrea Romano commentrak and the 1993 Mask of the Phantasm HBO First Look special that's currently on YouTube? Batman & Robin got better treatment on DVD for crying out loud.