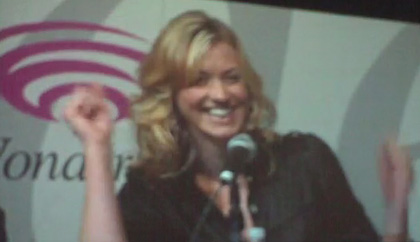 Out of all the comic book cons I've been to, I prefer San Francisco's WonderCon because it's more laid-back than the other cons and Moscone Center South isn't so packed. And yes, there are TV show and movie panels like the Chuck panel with cast members Zachary Levi, Yvonne Strahovski (above), Adam Baldwin and Joshua Gomez and series co-creators Josh Schwartz and Chris Fedak, but there aren't so many TV and movie panels that they cause the programming schedule to be overcrowded, so that gives me more time to talk shop with people and check out their comics. Plus, WonderCon is right across the street from Jollibee and Red Ribbon. Automatic win.

At WonderCon, I ran into an ex-co-worker, an on-and-off Fistful of Soundtracks listener (more on him in the graf after the next one) and Film Score Monthly soundtrack label founder/honcho Lukas Kendall, whom I never met face-to-face before. Lukas used to record a few phoners with me in the earlier years of the college radio version of A Fistful of Soundtracks.

Also, I got to meet some bloggers whose blogs I regularly read, I talked shop with IDW letterer Chris Mowry, I took some career advice from Keith Knight and Stephen Notley (he raised a good point about why Topher Grace would have been a better Spider-Man than Tobey Maguire, whom Stephen finds to be too humorless to play a wisecracking New Yorker like Spidey), and Chris, Keith, Ed Brubaker, Matt Fraction, Darick Robertson, Erik Larsen, Keith R.A. DeCandido and Michael Aushenker signed comics or promo materials for me. 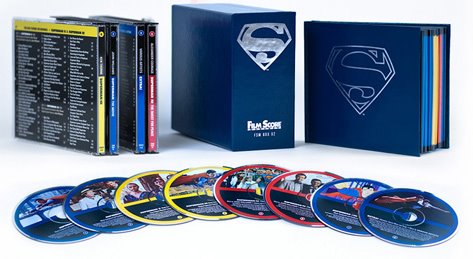 The AFOS listener I met was graphic designer Joe Sikoryak, who's responsible for the look of Film Score Monthly and its spiffy CD packaging and booklets. FSM's Superman: The Music box set (above) is one of Joe's coolest achievements. I went to see Joe at a panel he was moderating (it was for Super Capers, an indie superhero flick in which Adam West pokes fun at his Batman persona) because before the panel started, I needed him to answer a question that had been nagging me ever since I ran into him on the previous day: Was Joe the cartoonist behind The Daily Show's brilliant "Decider" segments, which reimagined Bush as a caped superhero? (Joe told me his brother R. Sikoryak was the one who produced "The Decider.") It was surreal to be talking to Joe for several minutes while both Adam West--a.k.a. '60s Batman, a.k.a. Lookwell(*), a.k.a. the Gray Ghost--and Sam Lloyd, one of my favorite supporting players on Scrubs, are sitting a few inches from you. 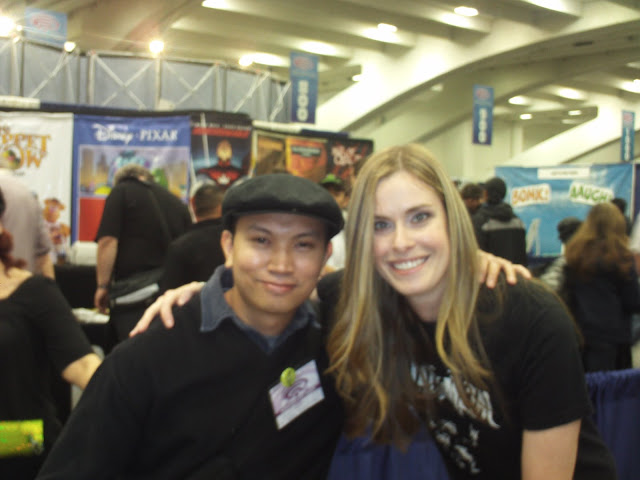 Here I am at WonderCon's G4 booth with Attack of the Show's Blair Butler, who reviews comics and graphic novels during AOTS' Fresh Ink segment. Blair lit up when I asked her to autograph her own rave review of All-Star Superman in an issue of Geek Monthly magazine. I'm not really a fan of the Superman character or the superhero genre, but like Blair, I've enjoyed Grant Morrison and Frank Quitely's clever Supes revamp, which ran from 2005 to 2008 and was the recent focus of an A.V. Club "Gateways to Geekery" post. As Blair wrote in her review, All-Star Supes is "a master class on how to mesh great plotting and great pencils."

Then I said to Blair, "The Eskimo kiss you did with Olivia [Munn] made my week."

Blair said that when Olivia goes off-script or takes shtick like the Eskimo kiss or an impromptu shaving of part of Kevin Pereira's hair into unexpected directions, you can't stop her from whatever she's doing and you have no choice but to roll with it. The Eskimo kiss went way longer than Blair expected, which of course, resulted in great live TV.

Also, Blair and I wondered what is the deal with Olivia's irrational fear of balloon popping noises ("Maybe they sound like gunshots to some people"). 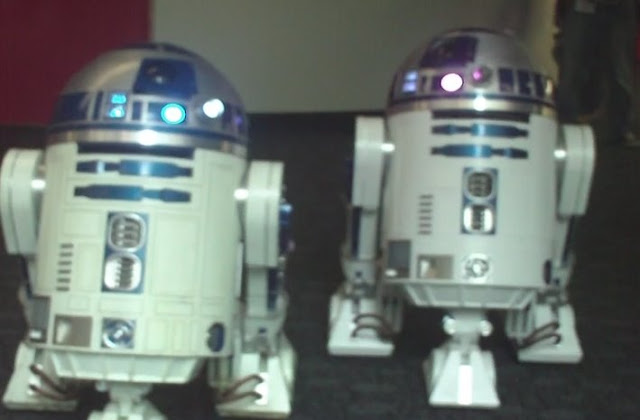 Next time, instead of the Star Wars droids, I'd like to see the Daleks roam around the Moscone hallways, so that I'd have some fun watching the giant salt-shakers with toilet plungers harass any of the British WonderCon visitors who used to hide behind the couch during a Daleks episode of Doctor Who. (I mean, c'mon, England. Giant salt-shakers made you shit your trousers when you were kids? Really?) 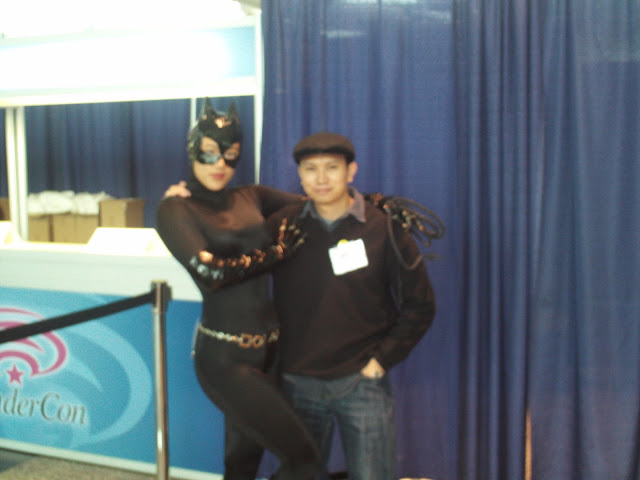 Unfortunately, the rest of the photos I took--like a snapshot of a female Robin (the Boy Wonder, not the Witch Hunter) cosplayer--are even blurrier than the ones I've posted. There are a bunch of pretty dope Flickr photo galleries that feature WonderCon snapshots that are better than the ones I snapped.

Here's a word of advice to anyone who attends WonderCon and is actually reading this: Skip the expensive, underwhelming convention food (you're going to have to in this recession) and eat outside. Take your money to Jollibee or any one of the local cheap eateries (or better yet, non-fast food joints). Chickenjoy trumps overpriced Costco-quality pizza any day of the week.
Posted by J. John Aquino at 1:35 PM