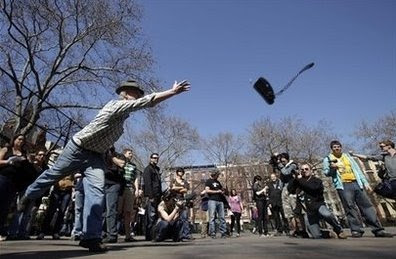 There needs to be a West Coast version of these games, which were held for the unemployed at Tompkins Square Park in Manhattan today. I'd sign up for them in a heartbeat:

Four events were planned: "Pin the Blame on the Boss," a "You're Fired" race, piñata-bashing and the highly anticipated fax machine toss, which had to be nixed at the last minute, to much heartbreak. The parks department balked at the idea of having office equipment hoisted aloft ("dangerous," said a spokeswoman) and then smashing to the ground ("which is essentially littering," per the spokeswoman), so Mr. Goddard substituted "Office Phone Skee-Ball," which also involved hurling office equipment about, albeit equipment of a smaller sort.

I have an idea for an Unemployment Olympics event: "Diversion." The competitors have to come up with the cleverest way to get rid of an annoying chatterbox co-worker who won't leave their cubicle.
Posted by J. John Aquino at 9:30 PM