"Brokedown Merry-Go-Round" Show of the Week: Rick and Morty, "Pilot" 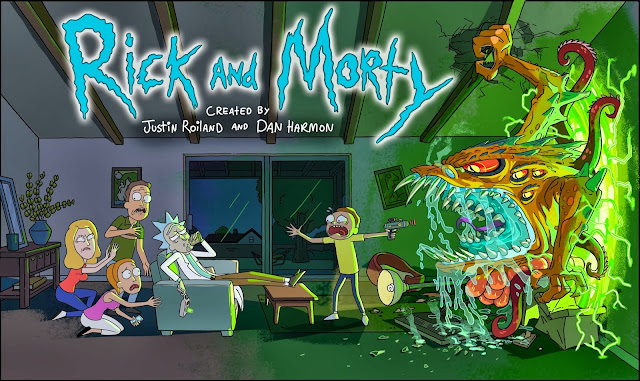 Rick and Morty doesn't debut on Adult Swim until December 2, but the network has already posted the premiere episode on YouTube, and it's one of the strongest first episodes of an animated show for adults I've seen in a while. Most adult animated shows I've grown to love--whether it's The Venture Bros., The Boondocks or Bob's Burgers--don't even start off as confidently as Rick and Morty does right out of the gate. That's mainly because Rick and Morty is the first animated show from Community mastermind Dan Harmon. It's the show Harmon worked on during the interval between his controversial ouster from his own creation by Sony Pictures Television and his return to Community a year later, and that distinctive comedic voice of Harmon's that was sorely missing from Community's creatively bumpy fourth season is all over Rick and Morty (Harmon's knack for sharp and spontaneous-sounding dialogue is also all over this new show). Harmon's offbeat sensibilities--the same sensibilities that irritated Sony executives (who wanted a more traditional sitcom about community college life than the one Harmon was crafting for them), as well as some Community staffers who found Harmon difficult to work with--are born for animation.

If Doctor Who were both a wacky suburban grandpa and a drunken sociopath, he'd be Rick, a scientific genius who's moved in with his grown-up daughter Beth (Sarah Chalke), an animal heart surgeon, and her family. Beth's strait-laced husband Jerry (Chris Parnell) despises Rick and wants him out of the house; teenage daughter Summer (Spencer Grammer) despises her family and cares only about looking for her next boyfriend; and teenage son Morty is grappling with learning disabilities and is lacking in self-confidence. Rick hates all forms of bureaucracy, including high school, and is continually yanking Morty out of school and taking the kid along with him on his dangerous experiments and excursions into other dimensions to build up both Morty's smarts and his self-confidence. He thinks high school is to blame for Morty's low intelligence, and in one of the pilot episode's best jokes, it turns out he's right when we see that Morty and his classmates are still being taught in math class that 2 + 2 = 4 and 5 + 5 = 10.

Like much of Harmon's work on Community, Rick and Morty is high-concept. It originated as a crudely animated series of Channel 101 shorts from Rick and Morty co-creator and voice actor Justin Roiland (a.k.a. the Earl of Lemongrab on Adventure Time), The Real Animated Adventures of Doc and Mharti, which took Doc Brown from Back to the Future and turned him into an inebriated pedophile. Rick and Morty retains neither the Back to the Future spoofery nor the creepiness of those gross shorts. Rick is now grandpa to the kid, and his abusive treatment of Morty is toned way down, but he's still a puke-stained drunk (Roiland also returns to voice both characters). You can tell where Harmon's input came in as he and Roiland reworked Doc and Mharti for Adult Swim. Harmon's made Rick more likable, or rather, as likable as a sociopathic grandpa who cares a small bit about his grandson can be. Instead of urging Morty to lick his balls to save the universe, Rick is seen attempting to help the weak-willed kid get closer to his dream girl Jessica (Kari Wahlgren) by procuring a neutrino bomb that he'll detonate to replace the current world with a new one where Morty and Jessica would be the sole survivors and would live like Adam and Eve.

The animation is also a million times more impressive on Rick and Morty than in the Channel 101 shorts. The premiere's best moments of animation take place during an epic chase through an extraterrestrial customs facility on one of the other dimensions Rick takes Morty along with him to. The alien character designs in this sequence are even weirder than the ones that were found on Futurama, and there's a brilliant and batshit crazy sight gag where Morty collides with an alien stoner who's smoking a hookah with an alien fetus floating inside the water jar, and the kid ingests some of the vapor and coughs out a loogie, which comes to life and rapidly ages from a baby to a dead old man in four seconds. 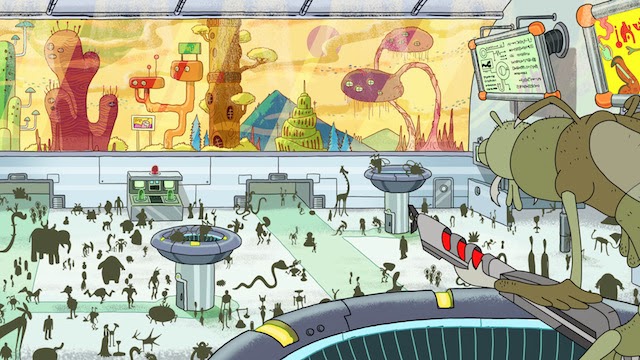 Only occasionally does the premiere suffer from pilot episode-itis. Chalke is saddled with all of the pilot's most exposition-y lines ("I'm my father's daughter. I'm smart. Why do you think I'm a heart surgeon?"). According to the Harmontown podcast episode where Harmon and co-host Jeff Davis riffed on-stage with Roiland, Chalke and upcoming Rick and Morty guest star John Oliver at the Largo in L.A., Harmon and Roiland hired the former Scrubs star after they were impressed by her ability to burp on cue. Here's hoping Chalke gets more to do comedically in future episodes. (In that Harmontown episode, Chalke, who's fluent in French and German, busts out incredible-sounding impressions of her French Canadian and German schoolteachers.) In the next few weeks, we'll see if Rick and Morty can maintain the premiere's consistently funny vibe and impressive look, but for now, it's off to a good start--unlike the convulsive Morty in the midst of side effects from his intelligence boost at the end of the premiere.

Memorable quotes:
* Summer: "OmigodmyparentsaresoloudIwannadie." Rick: "There is no God, Summer. You gotta rip that Band-Aid off now. You'll thank me later."

* "We had a little incident and a student was frozen to death. AND THERE'S NO EVIDENCE THAT A LATINO STUDENT DID IT! Everyone wants to take this to a racial place. I won't let them."

* "They're just robots, Morty! It's okay to shoot them! They're robots!" "They're not robots, Rick!" "It's a figure of speech, Morty! They're bureaucrats! I don't respect them! Just keep shooting, Morty!"

* Rick: "I'm a genius! I build robots for fun." Jerry: "Well, now you can build baskets and watch Paul Newman movies on VHS and mentally scar the Boy Scouts every Christmas." Beth: "What does that mean?" Jerry: "It's personal."

* "Oh, for crying out... he's got some kind of disability or something! Is that what you want us to say?" "I do?" "Well, duh-doy, son." Harmon sure loves his duh-doys (Britta is fond of saying "Duh-doy" on Community).