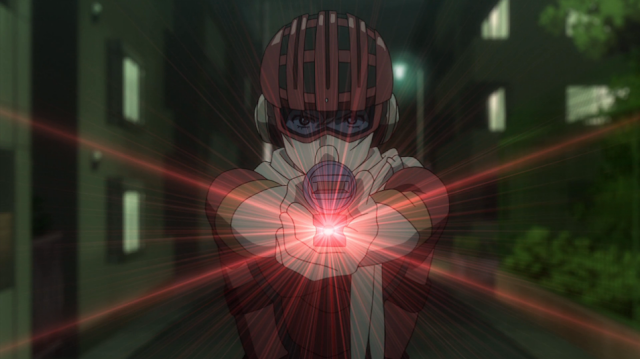 Harazuka (Toru Okawa), the R&D guy from a stationery company who presents Samurai Flamenco with his first gadgets in "Capture Samumenco!," Samurai Flamenco's latest episode, is significant for being the first person--outside of Hazama's dead grandfather--to tell the wanna-be superhero he genuinely believes in him and his mission to do some good. Kaname, the self-absorbed action star who's trained Hazama in the ways of fighting, says similar things to his student ("Superheroes will never die!"), but they ring hollow, and he does it to stroke his ego. Mari doesn't care about Hazama's mission; she's in the superhero game to indulge her kinks for dominating men (and being dominated herself, by a man in uniform), as we see in "Capture Samumenco!" when she blurts out, "Time to blow off steam!," in front of the other Flamenco Girls and quickly corrects herself by saying, "Time for the Flamenco Girls to save the day!" 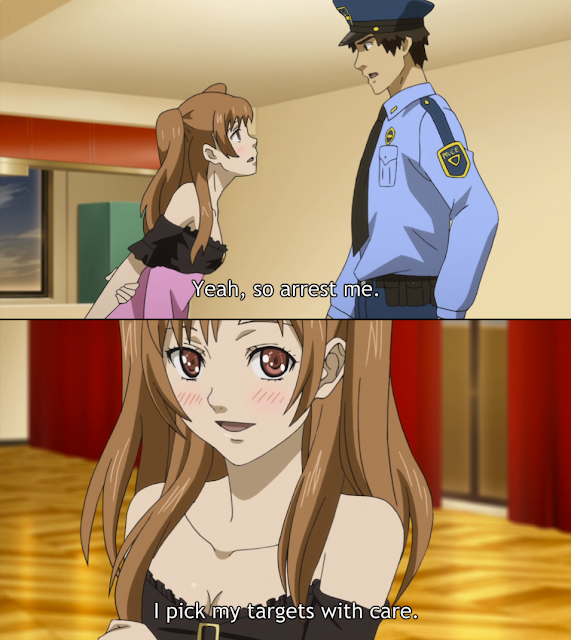 You'd think Goto, the closest thing a friendless only child like Hazama has to a best friend and protective older brother, would have told Hazama by now that he believes in him, but he genuinely doesn't (although some of Hazama's flair for the dramatic is starting to rub off on him, like when he realized he enjoyed dressing up in the Samurai Flamenco costume at the end of "Flamenco vs. Fake Flamenco"). Goto still considers Hazama crazy for choosing to enforce the law as if he's the hero of a tokusatsu show, rather than opting for saner avenues of law enforcement, like becoming a prosecutor or a cop like him. 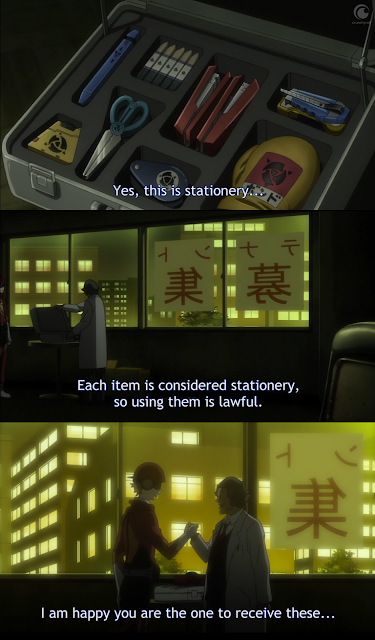 During the first meeting between Samurai Flamenco and Harazuka, the handsome-looking coloring, which brings to mind Wally Pfister's sepia-toned cinematography in Batman Begins, underscores that something monumental is happening. Harazuka is clearly being established as the Lucius Fox or Q to Samurai Flamenco, a technical genius who disguises weapons as mundane office supplies in the episode's best joke, even though it's a bit Blankman-ish (the tape measure that turns into an effective grappling hook pistol is sure to be a hit with Samurai Flamenco cosplayers). He's snappier than the calm and unassuming Lucius (I like his shouty response to Hazama's insistence that the fighting moves he learned from Kaname are sufficient enough to protect him in a tough spot: "Your passion is not enough!") but not snarky or irritable like Q. He even gives his gadgets to Samurai Flamenco free of charge, which is fucking insane in a stagnant economy like Japan's. That's probably the least realistic moment in an animated show that's been surprisingly realistic and grounded about so many things, whether it's the drudgery of filming a TV show on location (like in "The Meaning of Justice" last week) or how the world reacts to people in superhero costumes who aren't San Francisco's Batkid.

In "Capture Samumenco!," the world reacts in different ways. You have otaku who dig seeing superhero genre tropes being brought to real life or become believers in heroes again after Samurai Flamenco saves them. You have cynics like Goto who find it all to be crazy ("Why do weirdos keep flocking to me?"). And then you have those who, when presented with an opportunity for mad guap like the High Rollers Hi news site's 10 million yen reward for capturing Samurai Flamenco, will see him not as a hero but as yen signs in their eyes. The hordes of greedy bounty chasers become so out of control that Samurai Flamenco has to be saved from them instead of him saving them, and that's where Harazuka's gadgets come in handy for Samurai Flamenco. 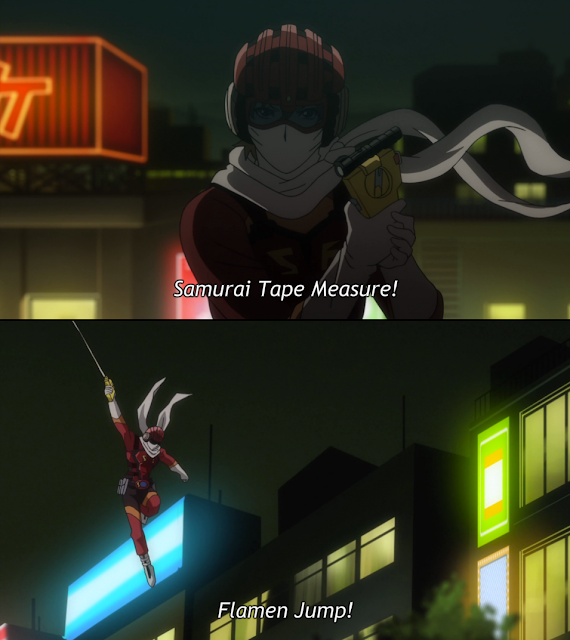 Akira Konno (Satoshi Mikami), the High Rollers Hi editor who started the reward, is the closest Samurai Flamenco has gotten to a supervillain (and judging from a lower-level Yakuza thug's line of dialogue about Samurai Flamenco's off-screen interference in a drug ring, I take it the Yakuza is going to be taking on that adversarial role real soon), but in keeping with the show's subdued nature, Akira doesn't twirl his facial hair or cackle loudly. He didn't start the reward because of hatred for Samurai Flamenco. Like Mari during the events of "Idol Devastation" and Kaname (and anybody in reality TV), he's in it mainly for the publicity. On a show where the hero is confronted not with supervillains but with everyday assholes like the blond-haired douchebag with the knife at the start of "Capture Samumenco!," the craving for publicity is the ultimate supervillain.

"Capture Samumenco!" is another satisfying episode of an animated show that's quickly become one of my favorites. Like that Weekend Update nightlife correspondent Stefon once said, this place has everything. Smart showbiz satire. Social commentary that hasn't taken a turn for the didactic so far. The subversion of superhero genre tropes. Characters who are smarter than what I usually expect from the superhero genre (I like how everyone's correctly guessing that Samurai Flamenco is Hazama). Tokusatsu parodies. Japanese panel show parodies. J-pop parodies. Humor in an anime that doesn't make me say, "There once was a time when I would have laughed at this shit. It was called '12 years old.'" A lesbian idol singer who's pining for a bandmate who, in turn, is pining for a male cop because she has a fetish for dudes in uniforms (Samurai Flamenco clearly--and fortunately--isn't a kids' show even though the titular character is an overgrown kid). And now, gadgets. 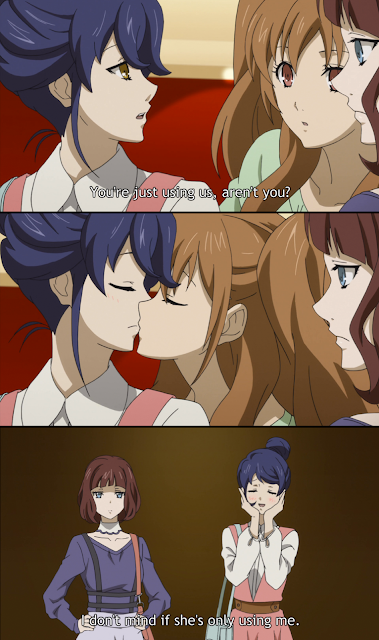 Stray observations:
* "Capture Samumenco!" writer Takahiro drops clues that Goto (whom Mari now thinks is having a gay relationship with Hazama after she fails to seduce him) is being catfished by peppering the texts from Goto's "girlfriend" with the words "cat," "sushi" and "hirame" (a.k.a. halibut).

* Samurai Flamenco's reaction to everyone chasing him is, of course, the following: "Something isn't right. This is just like what happened in Harakiri Sunshine, episode 8, 'Brainwashed! A City Full of Enemies!'"

* Like those quick shots in Stir Crazy of a bully's dick being crushed by a pair of pliers, the shot of the Flamenco Girls' heels flattening Gouriki-san's crotch will make every male viewer's balls implode. 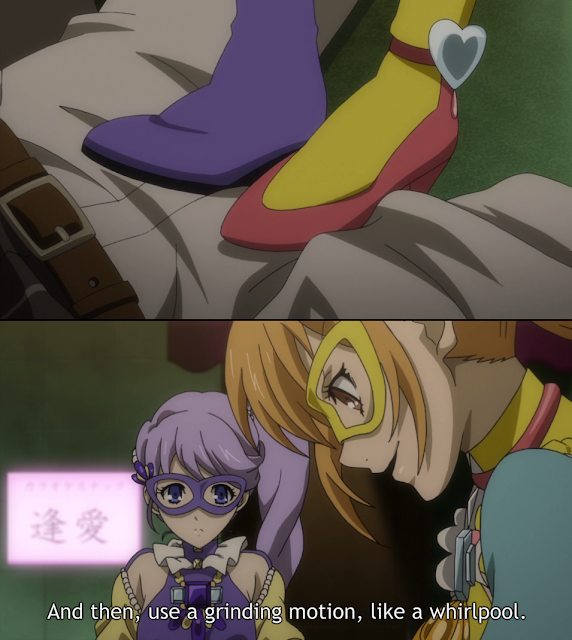 * So I take it Hazama prefers the bike helmet over the helmet his grandfather made for him. I wonder why Hazama reverted to the bike helmet instead of continuing to rock the horned helmet. Maybe he doesn't want to look like Magneto had a three-way with El Chapulín Colorado and the Great Gazoo. 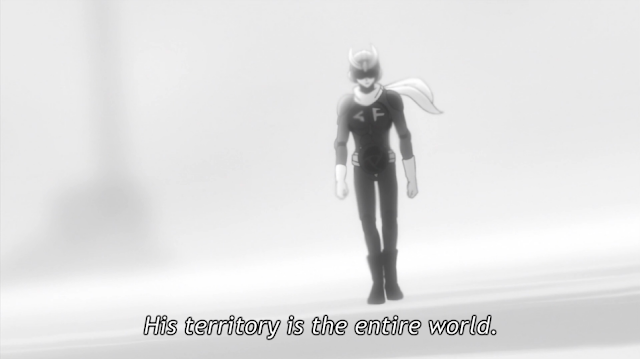 * The end credits footage of Kamen Rider Black, an '80s tokusatsu show I'm not familiar with but was mentioned in dialogue between Goto and another cop in the series premiere, was what the animators were paying tribute to during last week's poignant sequence where Hazama read his grandfather's letter about carrying on his dream of creating a real-life superhero.