"Brokedown Merry-Go-Round" Show of the Week: South Park, "A Song of Ass and Fire," and Samurai Flamenco, "Change the World" (tie) 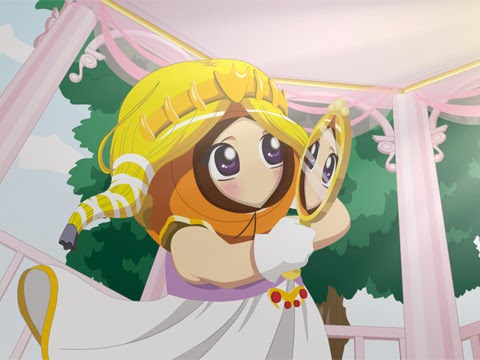 Consistently funny South Park episodes are a rarity these days, and "A Song of Ass and Fire," the second in a three-parter that reimagines the upcoming holiday season's Xbox One/PlayStation 4 console wars as Game of Thrones, helps break the show's slump with a sturdy storyline (which began in "Black Friday" last week) and jokes that stick the landing and are even stronger than the jokes in "Black Friday" by being occasionally surprising. I didn't see the punchline to the news anchor sex scene coming and couldn't stop laughing for a minute and a half afterward. Plus any moment where South Park parodies anime is worthwhile because Trey Parker nails the sounds of J-pop so well, like he does here with Princess Kenny's anime theme song.

The only running joke that's lazily written in "A Song of Ass and Fire" is Game of Thrones creator George R.R. Martin's obsession with wieners, which doesn't really go anywhere (Martin's choir inside his phallically decorated mansion and their performance of an all-"wieners" cover version of the Game of Thrones main title theme are filler and just an excuse to pad this three-parter out). Otherwise, it's nice when South Park isn't comedically asleep at the wheel, whether it's an Xbox One racing wheel or a PS4 racing wheel.

Over on Samurai Flamenco, the show just took a turn for the crazy--or hasn't. "Change the World" finds Masayoshi Hazama in distress after a note from his deceased grandfather Daisuke Hazama reveals that Masayoshi's parents were murdered, and he's worried about his inability to feel enraged by the way in which they died. The episode also pits Masayoshi and Goto against the show's first real supervillain: a crazed drug chemist who transforms into Guillotine Gorilla, a giant gorilla with a guillotine for a stomach and a minion of a villain boss who identifies himself to Samurai Flamenco as "King Torture." Samurai Flamenco's tonal shift from largely grounded slice-of-life territory (the show's universe has been established in the last few episodes as a universe without superpowers and supervillains) to typical tokusatsu material is extremely jarring and out-of-nowhere. 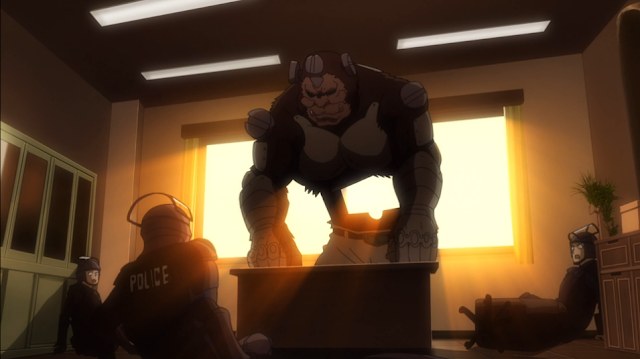 Some bloggers think Guillotine Gorilla and King Torture are hallucinations Samurai Flamenco, Goto and the other cops are experiencing due to the drugs they found during the drug bust that Samurai Flamenco joins in on (the police department honors him for bringing the crime rate down and makes him "police chief for a day," while Akira is disappointed about his site's crime news headlines becoming so dull because of the positive effects of the Flamencos' heroic acts; could Akira have planted those hallucinogens to manipulate headlines and stir shit up again?). The fact that the Guillotine Gorilla/King Torture cliffhanger ending is animated in the same gauzy filter that shrouds Masayoshi's fantasy sequences about Daisuke is a hint that this could all be playing inside Masayoshi's head. Guillotine Gorilla could just be a perp on PCP, reimagined by an increasingly delusional Masayoshi as a talking gorilla.

But if it turns out next week that humans are capable of transforming into monsters straight out of Thor: The Dark World, I'm going to be slightly disappointed. Nothing we've seen on this show has built up towards drugs that alter people's DNA like what Arrow is carefully doing this season with the particle accelerator to establish Barry Allen and his (now-to-take-place-outside-of-Arrow) transformation into the Flash, and that's just sloppy writing if superpowers were indeed always part of this show's plan. My disappointment would also stem from how much the absence of superpowers and supervillains on Samurai Flamenco has helped make the show a unique and different take on the superhero genre in animation (so far, Samurai Flamenco has been as grounded as Christopher Nolan's live-action Batman movies but not as somber). With the addition of Guillotine Gorilla and King Torture, Samurai Flamenco becomes just another animated superhero show, although with some above-average writing. 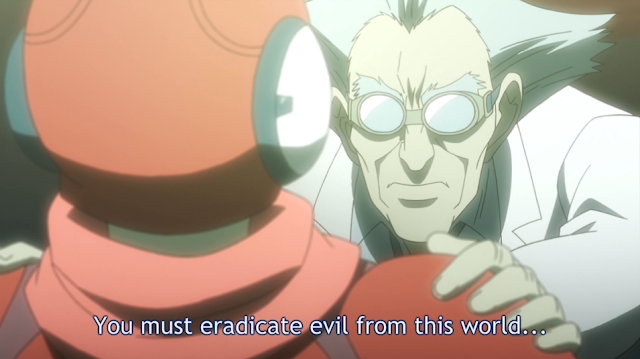 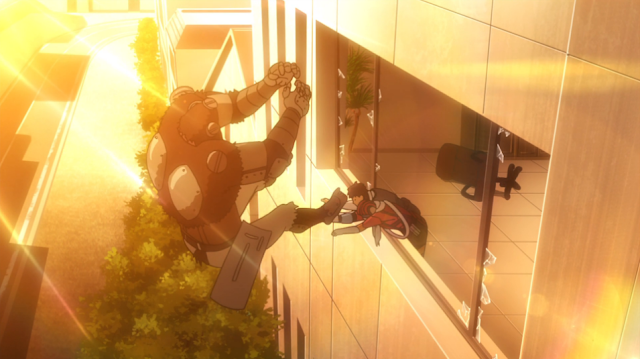 While a huge question mark hovers over the show's tonal direction like King Torture hovering ominously over Samurai Flamenco and Goto, everything that precedes the wild cliffhanger is Samurai Flamenco at its slice-of-lifey best. Kaname and Harazuka, who's as much of a fan of Kaname's old Red Axe show as Masayoshi is, meet each other for the first time and get drunk together off-screen, as implied by one of the most amusing abrupt cuts this show has done. Meanwhile, Mari goes insane over the lack of male criminals to pulverize; Moe (Erii Yamazaki voices Moe's bashfulness really well) continues to be in love with Mari (and continues to show how she's the only one out of the three idols who's fluent in English when she happily describes Mari's insane behavior as "Decadence!"); and in a nicely scripted moment of lengthier-than-usual Goto dialogue, Goto finally gives Masayoshi a vote of confidence in his mission as Samurai Flamenco, but in a typically world-weary (and guarded) Goto way that illustrates how well-realized many of Samurai Flamenco's characters are ("My basic point is that you're a freak, not a hero. You're only human, so having questions is natural. Honestly, I don't understand the current problem. But as a fellow human, I trust freaks more than I trust heroes.").

But that tonal shift is a bit of a concern for me because, as the Japanese band SPYAIR says about their old selves in the unsubtitled "Just One Life" theme song lyrics that I recently discovered the English meanings of, Samurai Flamenco's old--and more interesting--self seems to have died yesterday.

The uncensored cut of "A Song of Ass and Fire" can be streamed in its entirety at South Park Studios. Samurai Flamenco's episodes are posted on Crunchyroll the same day they premiere in Japan, but for Crunchyroll subscribers only.
Posted by J. John Aquino at 9:15 PM