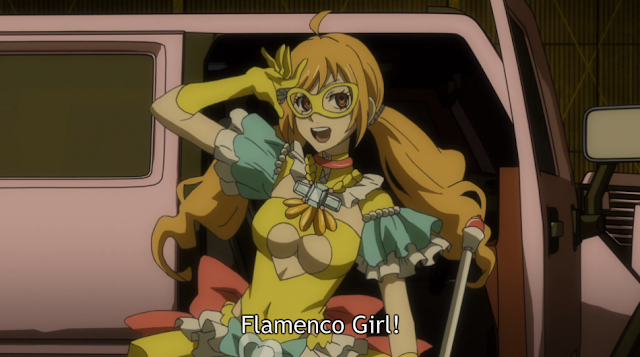 Ever since Samurai Flamenco introduced Mari (Haruka Tomatsu), Mizuki (M • A • O, and yes, that's her actual, interpunct-y name) and Moe (Erii Yamazaki), the three members of the J-pop girl group Mineral Miracle Muse, I've been wondering why Mari has been behaving strangely and has gotten the most screen time outside of Hazama, Goto and Sumi, Hazama's manager. This week's Samurai Flamenco episode, "Idol Devastation," clears up the mystery that is Mari, who's been watching Samurai Flamenco's rise to fame like a hawk and correctly deduced last week that Goto's temporary stint in the Samurai Flamenco suit (which Goto seemed to be enjoying) was a ruse to throw off anyone's suspicions about Hazama's double life. Like Hazama, Mari believes she's found her true calling as a superhero, and when a trio of kidnappers abducts Samurai Flamenco and attempts to unmask him to nab a million-yen reward for uncovering his identity, she seizes the opportunity to make her debut as Flamenco Girl and rescue Samurai Flamenco.

That great little commercial shoot scene in "My Umbrella Is Missing"--Mari messes up her cue when she notices Hazama's singing to himself the theme song from Kaname's superhero show Red Axe to calm his nerves--makes a whole lot of sense now. Mari's a superhero genre fan just like Hazama, except, as we see from her shrine of superhero show memorabilia, she's more into the magical girl subgenre (you know, Sailor Moon), the basis of Flamenco Girl's costume and persona. As a superhero, Mari turns out to be much smarter and more physically aggressive than Hazama, who still gets overpowered by the kidnappers despite picking up a few moves from his new martial arts mentor Kaname off-screen. She correctly figured out that this inept male fashion model is Samurai Flamenco, and she easily defeats muggers and would-be kidnappers with swift and non-stop kicks to their crotches. The silly noises Flamenco Girl makes as she delivers those nut shots are the comedic high point of "Idol Devastation," which should be retitled "Jewel Devastation." 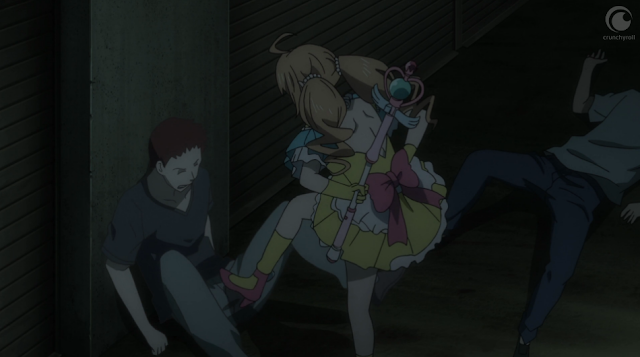 Mari's one big mistake is lousy timing. Had she not flunked the written portion of her driver's license test seven times, she would have beaten Samurai Flamenco to the punch as Japan's first real-life superhero. So she blackmails Hazama into an arrangement where she'll keep his identity a secret if he agrees to team up with her and let her be the rescuer or victor while he would act as bait for muggers. It all works out well for Flamenco Girl and boosts her online popularity, while Samurai Flamenco has to put up with playing the damsel-in-distress and serving as coffee boy to his new boss Flamenco Girl in order to keep his secret identity safe. Last week, Kaname lied to the public about coming up with the idea for Samurai Flamenco, and Hazama managed to stand up to him and stop him from continuing with his lies (well, almost: the whole kidnapping mess is caused by Kaname's decision to fly off to Hollywood to chase after an acting role instead of keeping his promise to Hazama to give him fighting tips during a night of patrolling Numasaki, one of Japan's most crime-ridden sections). This week, Hazama isn't as assertive when dealing with Mari, due to his fear of being outed as Samurai Flamenco. Maybe it's also because he saw what Mari is capable of with her heels and decided, "Okay, I'll just back off this one."

Instead of expressing gratitude to Flamenco Girl and Samurai Flamenco for helping prevent crime and making the streets safer for women at night, Goto's police department superiors circulate a memo to all officers, including Goto, to keep an eye on the duo's crimefighting activities in case any instances of excessive force from the duo take place. This, of course, is bound to put a damper on Hazama and Goto's friendship at some point in the future, but for now, Goto gently warns Hazama and Mari to not attract so much attention and to do their crimefighting when his colleagues aren't watching. Speaking of Goto, I'm starting to wonder about this girlfriend of his whose texts to Goto we frequently glimpse but has remained unseen. If this person's catfishing Goto, is it part of some sort of plot to bring down Samurai Flamenco? 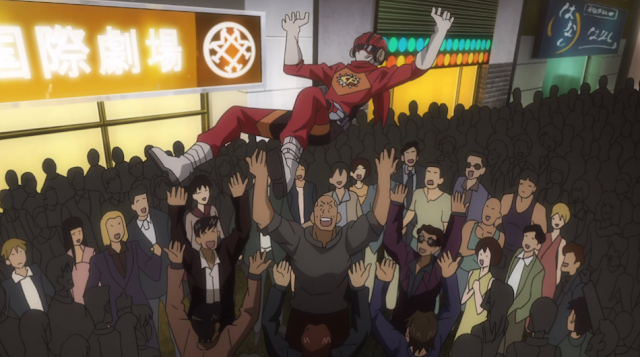 Watching Hazama experience humiliation after humiliation could have gotten repetitive by this point, but it remains fun to watch, partly because those moments of humiliation are balanced with Hazama making some progress as a superhero, like when he's able to thwart the mugger at the start of "Idol Devastation." Both the very first scene in the series premiere, which showed Hazama hiding his nakedness in an alley instead of showing him triumphantly cleaning up the streets, and the series premiere climax, which had Hazama delivering a speech to a bunch of middle-schoolers but failing to win them over, were endearing signs that this show was going to turn upside down the flawlessness of the TV heroes Hazama admires and instead be about a hero who's in over his head and may not be as cut out for a life of crimefighting as he'd like to be (I wouldn't be surprised if Hazama goes through some sort of Nick Andopolis-like heartbreak over his dreams being crushed by reality). If Samurai Flamenco keeps up the level of comedic quality it's shown in the first four episodes, writer Hideyuki Kurata and director Takahiro Omori's take on non-powered superheroes in the age of social media just might be the year's best new anime show.

* I'm not much into J-pop, but "Date TIME," the show's bouncy ED (a.k.a. end credits theme) performed by Mineral Miracle Muse, is the perfect musical bridge between the ending and the scene that usually follows the end credits. I kind of wish there was a post-credits tag this week (this episode lacked one). Last week's tag was a good one introducing Kaname's new role as Hazama's physical trainer.

* I don't care for nut shot gags. However, Samurai Flamenco may be the first show (not counting King of the Hill's "That's my purse!" episode) where nut shot humor actually made me laugh.

* Mari realizes she has a crush on Goto: "I didn't think he'd look so good in a uniform!" 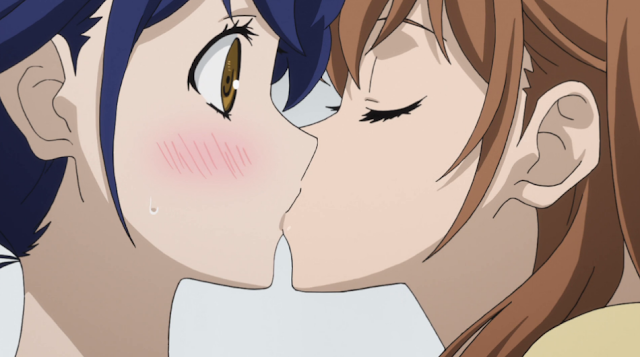