Throwback Thursday: Rise of the Planet of the Apes 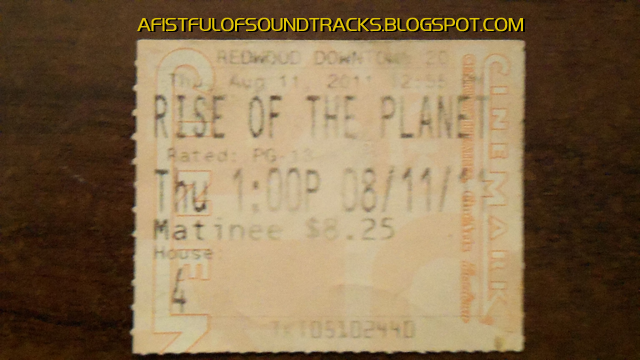 The most astounding thing about director Rupert Wyatt's 2011 surprise hit Rise of the Planet of the Apes, the second and better-received of two different attempts by 20th Century Fox to relaunch its Planet of the Apes franchise from the '60s and '70s, isn't the motion-capture technology the film deployed to bring to life superintelligent simians. It's the film's ability to somehow take otherwise charismatic actors like Brian Cox, Deadbeat star Tyler Labine and David Oyelowo and make them the most boring fucks on Earth.

For instance, the future Martin Luther King plays a villainous businessman here--before seeing Selma, I almost forgot Oyelowo previously appeared in this loose remake of 1972's Conquest of the Planet of the Apes--but he makes way more of an impression as a villain on the animated Star Wars Rebels, even without ever showing his actual face. As the superintelligent chimpanzee Caesar, Andy Serkis, with the help of Weta Digital's motion-capture tech, is the real star of these modern-day Apes movies. After the remarkable and expressive mo-cap acting of Serkis, Karin Konoval, a.k.a. Mrs. Peacock from the ultra-disturbing X-Files episode "Home," and, in 2014's Dawn of the Planet of the Apes, Toby Kebbell, there's no way in that place Charlton Heston damned them all to that these Apes movies are going back to burying the actors under rubber John Chambers ape masks. 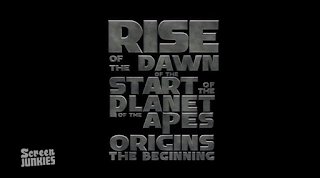 I appreciate how both Rise and Dawn are Caesar's story rather than the story of either his human father, Bay Area pharmaceutical scientist Will Rodman (James Franco)--whose search for a cure for Alzheimer's inadvertently triggers the events that will lead to the dominance of apes over humans--or one of Will's relatives. It's preferable over the way the Autobots are relegated to guest stars in their own live-action Transformers movies. But these modern-day Apes prequels, especially Rise, could really use a human ally character with the personality of either Heston's cantankerous Colonel Taylor from the first two Apes installments or Ricardo Montalban's Armando, Caesar's foster dad from the third and fourth Apes installments (as Will's dad, who's suffering from Alzheimer's, John Lithgow gives the best non-simian performance in Rise).

Franco is in visibly bored, "grrrr, where's my paycheck so that I can get some new leather paddles for my next art installation?" mode here. I wish Caesar's favorite parent were played by either Jeff Goldblum, who would have imbued some personality into Will and would have been able to bring a bit more life to Will's compassion for Caesar (but Will's dad would have had to have been played by someone older than Lithgow), or better yet, an actress like Jessica Chastain, because these modern-day Apes movies are too much of a sausage fest (Freida Pinto and, in Dawn, Keri Russell are little more than background extras).

That's one other thing that's missing from Rise and Dawn: a charismatic female presence like Kim Hunter's when she played Dr. Zira, the banana-hating chimp who becomes an ally of Taylor's, in the first three Apes movies. It's too bad Konoval's kindly circus orangutan Maurice, a simian character I like even more than Caesar, isn't female.


Maurice, who was named after 1968 Apes star Maurice Evans, is a huge part of why Rise is at its best when it moves away from Will and concentrates on the beginnings of Caesar's ape revolt. The dialogue for the scenes between Caesar and his simian followers is delivered in subtitled sign language, and the large amount of subtitled ASL in Rise is something you'd never expect to see in a summer blockbuster. Rise's comfort with silence and minimized dialogue during the ape sanctuary scenes and its confidence in maintaining that silence both make the digitized little girl's voice that translates Amy the gorilla's ASL in 1995's Congo sound all the more stupid.

All the spoken dialogue in the ape sanctuary scenes comes from the apes' mostly sadistic jailers, with the cruelest of them being Dodge Landon, played by Harry Potter villain Tom Felton in a not-very-convincing American accent. I really wish it were William Zabka from the original Karate Kid playing Dodge instead of Felton. It's such a Zabka part. Who wouldn't want to see a 20-something Zabka get smacked around by an angry gorilla? 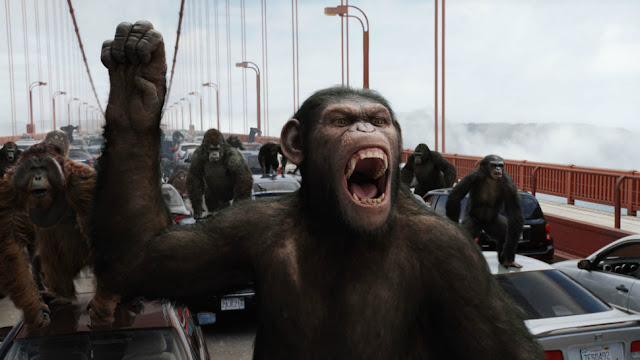 Felton has to deliver the cheesiest line in Rise and the prequel's most blatant callback to the first and best Apes movie: Heston's classic "Take your stinkin' paws off me, you damn dirty ape!" line. It's interesting how the worst line in the movie--a line we really didn't need to hear again because it's all too reminiscent of Tim Burton's misguided 2001 Apes remake--is followed by the movie's most powerful line, a moment that was foreshadowed by Roddy McDowall's Cornelius in the first Apes prequel, 1971's Escape from the Planet of the Apes: Caesar saying his first word, "No!"

Caesar's first word is the moment when Rise changes from a sci-fi prequel that's initially as pointless as The Phantom Menace and Attack of the Clones to the kind of riveting and worthwhile Apes movie we've always wanted to see but couldn't because of early-'70s 20th Century Fox's shoestring budgets and because of how limited creature FX technology was before the geniuses at Weta Digital got their stinkin' paws on it. I dig the city of San Francisco, but Serkis, Konoval and the other mo-cap performers are so skilled at turning Caesar and his lieutenants into sympathetic figures that I ended up rooting for their characters to wreak havoc on San Francisco. Now if only the movie would show Caesar and his army kicking each and every neighborhood gentrifier out of town.

None of Patrick Doyle's score cues from Rise of the Planet of the Apes are currently in rotation on AFOS, but "Golden Gate Bridge" ought to be.