That viral pic from Tumblr of Christina Ricci as Morticia Addams isn't real, but it proves why Morticia is the part she was born to play, baby


I've stayed away from Asian Twitter ever since two different camps within Asian Twitter came to blows over #CancelColbert--the dumbest-looking campaign against a fictional TV character since Dan Quayle's outrage over Murphy Brown's choice to become a single mom--and all that arguing between Asian Americans over #CancelColbert made me want to stick my head in the oven, so I've spent most of my lurking time on Twitter over on Black Twitter. Does the fourth half of that last sentence make any sense? Shit, it probably doesn't.

Black Twitter is sometimes a more enjoyable place to be than any other part of Twitter, mainly because of Desus Nice's consistently funny tweets about either hip-hop, sports, white people's bullshit or an America where "President Trump starts WW3 with Mexico and China." Desus has parlayed his 140-characters-and-less wit into both a career of writing for comedy shows on MTV2 and a popular, now-defunct comedic webseries with "all-caps rap reviewer" The Kid Mero that returned to the Internet earlier this month in the form of the newly launched podcast Bodega Boys. Emmy night and the following day are interesting examples of the differences in trending topics between Black Twitter and White Twitter, or as I like to call it, Facebook.

So Black Twitter has been all about the new Drake/Future mixtape, the enthusiasm over Uzo Aduba, Regina King and Viola Davis all winning Emmys for acting and black viewers' frustrations over a Twitter rant about Davis' candid and rousing Emmy acceptance speech that was posted and quickly deleted by a drunken white actress from General Hospital. Black Twitter shouldn't be surprised that the lady from General Hospital would post racist opinions about Davis' Emmy win for her role on How to Get Away with Murder: she's a Cassadine. Of course she would say such things.

How do I know all this shit about the Cassadines? I used to watch General Hospital in between UC Santa Cruz classes. I lived in a nice off-campus apartment building where none of the neighbors on my floor were weed dealers or were into sharing their weed, so I never really was heavily into weed like most other UCSC students. That also meant that when I wanted a good laugh at about 2pm before I'd slink back to class or the campus paper, I was too lazy to go score some weed downtown. Instead I would get a couple of good laughs at 2pm by just switching on General Hospital to chuckle over either three things: the show's G-rated and overly romanticized portrayal of the Mafia, two or three years before The Sopranos premiered and its popularity caused General Hospital to be completely changed into Sopranos lite; the fact that every outdoor conversation at night would take place on the same exact foggy Port Charles dock set; or one of Anthony Geary's genuinely funny and often unscripted one-liners during the feud between the evil Cassadines and the slightly less evil Spencers. That's how I know who the Cassadines are.

Anyway, while those are the trending topics on Black Twitter, White Twitter is preoccupied with much weirder things: viral footage of a subway rat carrying a slice of pizza (apparently he's got a few ninja turtles he needs to feed), gossip over David Cameron once inserting his dick into a dead pig as if he were in an episode of Black Mirror and a photo of Christina Ricci dressed up as Morticia Addams, the mother of Wednesday, the character Ricci charmingly brought to life in the two Addams Family movies. Yeah, that's white people in a nutshell.

Wait a minute. [KRS-One voice.] Rewind. Someone posted a pic of Ricci as Morticia? Has that person been reading my mind lately and glimpsing a hot fantasy I once had about present-day Ricci in a Morticia outfit? I'm no Goth, but I would love to see Ricci play Morticia in an Addams Family reboot. Also, why is the Photoshopping job on that Tumblr pic kind of shitty, and why does it remind me of Lena Headey's face getting poorly grafted onto her body double during Cersei's walk of shame? How's it possible that there are people who were actually convinced the photo is real? 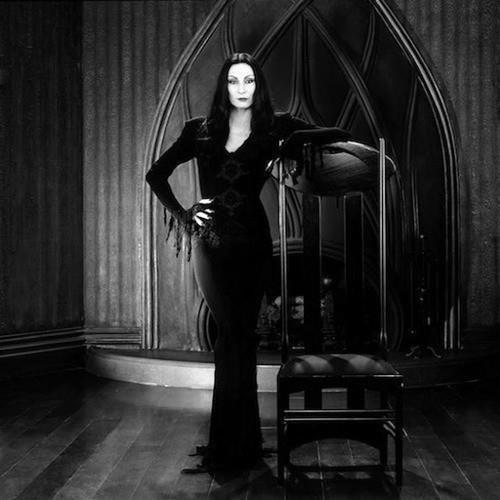 Ricci most recently starred as Lizzie Borden in both a Lifetime movie and a short-lived Lifetime show. An ideal future role for her would have to be Morticia or a grown-up Wednesday. The Addams Family, the show that was based on the only New Yorker cartoons that are worth a damn, has already been rebooted three different times in live action and once in animation (as well as turned into a Broadway musical starring Bebe Neuwirth as Morticia and Nathan Lane as Gomez). I hate most reboots, and the unwatchability and suckitude of the last two live-action Addams projects are a good reason why I dislike most of them (the Addamses are too big to be in something as small as a chintzy direct-to-video movie). But it's not surprising why a certain segment of Hollywood keeps wanting to resuscitate the Addams fam.

The Charles Addams characters' brand of dark humor--they're misfits mocking the lily-white and squeaky-clean suburbia of '50s and '60s sitcoms like The Donna Reed Show and then later on during the era of the Barry Sonnenfeld movies, America as envisioned by those who worshiped the Bush Sr. Administration--is timeless and always appealing, especially to misfits and outcasts who don't care for how dull, unpleasant and, well, hateful that kind of suburbia or America can be. At a time when a hatemonger like Donald Trump is trying to stoke the racist anger of that kind of America, maybe we need the Addamses on the screen again to take that America down and shoot arrows at it a la Wednesday and Pugsley during that Thanksgiving play they rewrote in Addams Family Values.

All an Addams reboot needs besides Ricci are a director who's incredibly focused--and doesn't let the art direction become the only good thing about the movie but still manages to infuse a strong visual sense--and a writer who's as sharp as Paul Rudnick, a script doctor on the first Addams Family flick and the sole credited writer of Addams Family Values, the sequel that was a perfect marriage of quip writer and teen performer delivering those quips (Rudnick/Ricci). Shit, on second thought, they should just bring Rudnick back, unless he'd rather stick to ghostwriting the film reviews of Libby Gelman-Waxner.

I want more than just Ricci channeling Morticia on the red carpet, man. I'd like another Rudnick-penned Addams movie, and I'd like her to be an Addams again. Ricci may have scared away Lifetime viewers while wielding Lizzie Borden's ax, but as an Addams wielding an ax, she'd definitely get our attention again.

Marc Shaiman's "The Tango," the instrumental highlight of Addams Family Values, isn't currently in rotation on AFOS (it was removed from rotation in 2012 due to limited station hard drive space), but it ought to be.