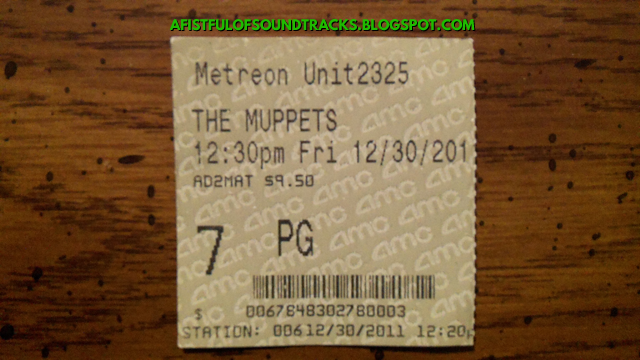 Usually on Throwback Thursday, I pull out from my desk cabinet--with my eyes closed--a movie ticket stub I didn't throw away, and then I discuss the movie on the ticket and maybe a little bit of its score, which might be now streaming on AFOS. Today, instead of drawing some random ticket, I'm going to focus today's TBT piece on the Muppets' return to the big screen after a 12-year absence, due to next Tuesday's premiere of The Muppets on ABC.

Network TV appears to be in such a sorry state this fall--original content on either streaming services or cable is where it's at these days--that the only new network comedy I'm looking forward to is ABC's The Muppets, which is being billed as "a more adult Muppet Show" (wait a minute, we've already had a more adult Muppet Show: it was called The Larry Sanders Show). As much as I love the film that was both the first Muppet feature film I ever saw and my unlikely gateway into the caper genre, the Jim Henson-directed, partially Jay Tarses-scripted Great Muppet Caper--it's my favorite of the Muppet feature films and a film subsequent Muppet films haven't surpassed, not even 2011's well-received The Muppets--TV, the medium the Muppets were created for, is where they work best and are at their funniest. I'm talking episodic TV, not movie-of-the-week TV, which was where Kermit the Frog and company spent most of the 2000s (and disappointed the franchise's most die-hard fans by starring in TV-movies like the poorly received Muppets' Wizard of Oz). Like the A.V. Club's resident Muppets fan, Erik Adams, said last year, a new take on The Muppet Show would give the Muppets' writers and puppeteers the proper space to stretch their ambitions and allow the franchise's gargantuan cast of characters to shine again in a format that's not as cramped as a two-hour movie.

But I have one huge reservation about this new weekly Muppet comedy from showrunners Bill Prady, the Big Bang Theory co-creator who got his start working for the late Henson, and Bob Kushell, and that would be the show's rehash of the confessional/mockumentary format that was popularized by The Office, Parks and Recreation and Modern Family. It's such a tired format these days that even Modern Family is starting to find ways to break away from the format, like when it told an entire story using nothing but Skype chats last season. No matter how many times Gonzo points out the tiredness of the confessional gimmick, I really wish the Prady/Kushell show would phase out the confessionals because much of the Muppet characters' appeal is due to their timelessness, and the confessionals scream out 2005.

Timelessness is also integral to why Flight of the Conchords episode director James Bobin's 2011 big-screen reboot works so well, despite occasional missteps like the film's ill-advised needle drop of Starship's 1985 radio hit "We Built This City," an anthem about maintaining the "purity" of rock n' roll that neither rocks nor rolls. Although I'm not a fan of musicals, I would rather hear another musical number written by Flight of the Conchords star Bret McKenzie--who won a Best Original Song Oscar for penning the film's clever and very Conchords-ish number "Man or Muppet"--than have to endure "We Built This City" again.

References to anger management classes and the crassness of reality TV (and terrible Starship songs) aside, Bobin's The Muppets could have come out of 1981 or 1991. There was a lot of grumbling to the press from Muppet project veterans like the retired Frank Oz about Bobin's movie before its release. They felt (no pun intended) the screenplay by lead actor Jason Segel and his writing partner Nicholas Stoller disrespected the Muppet characters by having them tell fart jokes or experience Martin-and-Lewis-ish bitter feuds. The film's story has Segel's character and his Muppet Show-loving little brother Walter, a new Muppet character voiced and performed by Peter Linz, helping Kermit (Steve Whitmire, whose most sublime bit of Muppet acting in the film has to be the distraught expression his hand gives to Kermit's face when he finds out Miss Piggy kidnapped Jack Black) to get the other stars of The Muppet Show back together after years of estrangement and unfulfilling jobs away from the limelight.

A bit of the old guard's skepticism about Segel and Stoller's screenplay is understandable because, conceptually, their screenplay is on the creaky side. Much of it is a rehash of the "Muppets put on a show to stop a greedy developer from tearing down their theater" story from 2002's made-for-TV It's a Very Merry Muppet Christmas Movie, which starred Joan Cusack as the greedy developer instead of Chris Cooper, who--despite being trained to rap by McKenzie, a skilled Beastie Boys parodist who once proved he could flow on Conchords, for a brief number where his villain character raps about himself--should never ever rap on screen again.

But otherwise, Segel, Stoller and Bobin take that "Muppets reunite to put on a show" premise and make it a timeless and effective way to reintroduce the Muppets and get a new generation of viewers to understand why the Muppets' irreverence and warmth were a big deal to those of us who grew up watching The Great Muppet Caper repeatedly or enjoying The Muppet Show and either its shtick involving Animal (the description of Animal's untold backstory in ego trip's Big Book of Racism! is hilarious: "Drunk, inarticulate and wilder than Tijuana on a Jerry Springer celebrity spring break--naturally, he's Mexican") or its various musical numbers. One of those numbers was the show's cover of Piero Umiliani's "Mah Na Mah Na," a nonsense song that resurfaces in the Segel/Stoller/Bobin movie's end credits and is notorious for originating not as a Muppet Show number but as an original song during the 1968 Italian softcore porno Svezia, inferno e paradiso (Swedish: Heaven and Hell).

How else should the Segel/Stoller/Bobin movie have reintroduced the Muppets? Put them through another half-baked parody like a Wizard of Oz remake? The "Muppets never grow apart or do fart jokes" complaints strike me as very "Gene Roddenberry won't allow the Enterprise-D officers to get into conflicts with each other"-ish. The skeptical Muppet veterans were wrong about Segel, Stoller and Bobin being too crass and cynical in their approach to bringing back the Muppets. In fact, I think Segel, Stoller and Bobin were so reverent at times about honoring the most beloved of Muppet movies, 1979's sweet-natured Muppet Movie, and pleasing the old guard (plus the Disney execs) that their movie doesn't have enough terrific little "whoa, how did that get snuck into a family film?" gags like Janice's random aside in The Great Muppet Caper about her past ("And I said, 'Look, Mother, it's my life, okeeey? So if I want to live on a beach and walk around naked...' Oh").

Fortunately, Segel, Stoller and Bobin didn't do away with the self-aware dialogue that's classic Muppets ("Didn't you see our first movie? We drive") or the occasional jokes only a few adults in the audience will understand, like the Muppets showing up on the cover of Ebony on a wall in Kermit's mansion or Rashida Jones threatening Kermit with "I will rerun Benson if I have to." I'm sure that line led to a lot of kids in the audience saying, "Mommy, who's Benson?" Segel, Stoller and Bobin also came up with the first moment in a Muppet movie that genuinely moved me and nearly made me tear up:

Whoops, not that scene. This scene:

The Muppets is noteworthy for being the first Muppet movie to take The Muppet Show and all its episodes and make them a pivotal part of the storyline. While Kermit's discovery of the crowds of fans waiting outside the Muppet Theater nearly made me tear up, some Muppet Show fans have said the film's archival audio clip of Kermit introducing guest star Bob Hope was the part of the film that first made them emotional.

That's how beloved The Muppet Show is as a variety show (variety is, by the way, a long-dead-in-America genre Neil Patrick Harris is attempting to bring back to American network TV this fall with NBC's Best Time Ever, which is loosely based on Ant & Dec's Saturday Night Takeaway from the U.K.), and the show receives a satisfying tribute in the form of The Muppets, the most enjoyable comedy movie about a variety show since 1982's My Favorite Year, director Richard Benjamin's thinly veiled movie about the making of Your Show of Shows. The Muppet Show was such a huge part of my childhood that words like "Time once again for Veterinarian's Hospital, the continuing story of a quack who has gone to the dogs" are easier for me to remember than any of the lyrics of "The Star-Spangled Banner."