Usually on Throwback Thursday, I pull out from my desk cabinet--with my eyes closed--a movie ticket stub I didn't throw away, and then I discuss the movie on the stub and maybe a little bit of its score, which might be now streaming on AFOS. This week, instead of drawing some random stub, I'm going to completely break protocol and focus on a first-run movie I didn't see in the theater. I caught this movie instead on Netflix, and it's a good one. This week marked the season premiere of Fresh Off the Boat, the single-camera sitcom that made waves last season as the first genuine hit show on network TV to center on an Asian American family--and also has been consistently funny to boot--so I'm discussing an equally intriguing sci-fi film from earlier this year that's also told from an Asian American point of view.

On the surface, America in the year 2041 looks enticing early on during Advantageous, indie director Jennifer Phang's second feature-length film. Nobody in the future seems to complain anymore that "We were promised spacecars" because the unnamed city Advantageous takes place in appears to be surrounded by such spacecars. The city's sleek architecture gleams prettily in this low-budget film's surprisingly convincing matte paintings. It's like a city where all the skyscrapers were aesthetically inspired by the gleaming, bean-shaped Cloud Gate, that giant Chicago sculpture I remember so well from Source Code and one of the musical numbers during Dhoom: 3. Best of all, small mom-and-pop restaurants that tout their hormone-free fried chicken have managed to survive gentrification. 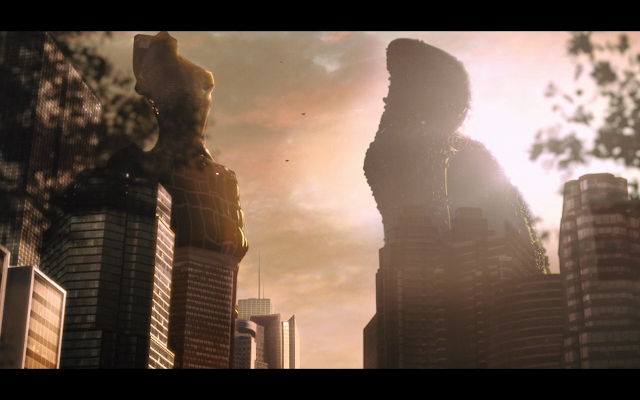 But as the film digs deeper into 2041 America, it becomes clear how really fucked-up the future is underneath all that surface prettiness. The spacecars aren't actually spacecars: they're surveillance drones deployed by both the police and tech firms like the Center for Advanced Health and Living, whose name sounds like a shady Scientology subsidiary. Domestic terrorism has become so commonplace that barely anybody bats an eye at a terrorist attack or objects to the loss of their personal freedoms due to the increase in drone tech. "The 2033 bubble" has apparently led to an end to the middle class. The unemployment rate for women has skyrocketed, resulting in an increase in homeless women on the streets. A radio news report that could easily be missed underneath the dialogue during first viewing depressingly rattles off stats about "the recent rise in child prostitution in our country." Education has become unaffordable.

When single mother Gwen Koh (Jacqueline Kim), the Center for Advanced Health and Living's spokeswoman, becomes one of the unemployed after losing her job due to the corporation's plans to replace her with a younger spokeswoman, she chooses an unusual last resort for ensuring that her 13-year-old daughter Jules (Samantha Kim, no relation) stays in the country's super-expensive private school system, a broken system that ends up being the only way to protect Jules from a bleak future of hooking on the streets. Gwen agrees to earn a living as a guinea pig for the Center's newest product: a risky alternative to cosmetic surgery that allows people to transfer their minds into younger bodies.

Advantageous, which is like the best Black Mirror story Charlie Brooker hasn't written, originated as a 2011 short film Phang and Jacqueline Kim co-wrote as part of the FutureStates series of shorts for PBS. The scenes from that 2011 version resurface in the feature-length version and are surrounded by newly shot material featuring Jennifer Ehle as a sinister Center executive and, in an atypically non-comedic and surprisingly effective role, Ken Jeong, who co-produced the 2015 version (James Urbaniak, who's so sublime at playing manipulative and evil assholes on comedy shows like The Venture Bros. and Review, gets to demonstrate some non-comedic chops in Advantageous as well). The biggest and most satisfying difference between the 2011 short and the 2015 film is the film's lack of an opening crawl establishing all of the above details about the dystopian future. 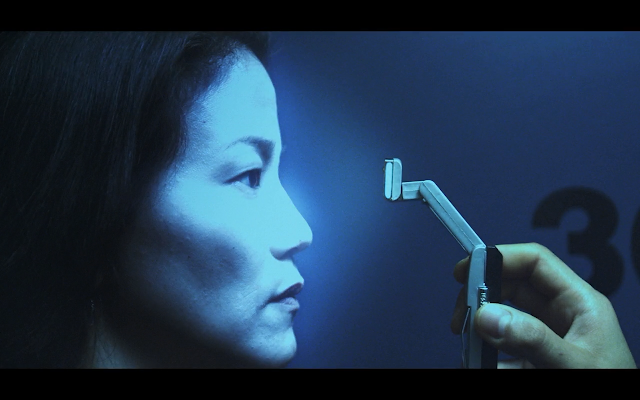 Omitting the crawl that opened the short causes the feature-length Advantageous to be ballsier storytelling-wise than even the director's cut of Blade Runner, which was never shorn of its explanatory crawl about replicants in the future despite completely removing Harrison Ford's clunkily delivered, "Grrr, can't wait to be done with recording this shit in the booth 'cuz I gotta go meet my weed connect"-ish voiceover narration. Phang wisely trusts the viewers to figure out piece by piece--and on their own, without much expository dialogue to hold their hands (other than the aforementioned fake news soundbites)--the future's worst aspects and its gender or racial inequities, as well as its strange customs. There's a great little scene where Gwen wants some time to herself to consider the "consciousness transplant," so she checks into a hotel that specializes in letting its guests go off the grid and be rid of all of their devices, as well as be rid of drone surveillance. In 2015, we have the freedom to go off the grid and take as long a break from social media or technological distractions as we want to, while in the fucked-up future Advantageous depicts, people have to pay to do that. But the most beautiful thing about that hotel scene is the lack of awkward exposition from the concierge like "Welcome to the Bedford, the hotel that grants you privacy from surveillance." It's world-building at its finest.

Another thing that makes the feature-length Advantageous superior to the 22-minute version is how the added material with Jeong (and an unseen Jeanne Sakata as Gwen's deeply religious mom) causes Gwen's desperation to make more sense and be more believable, even while Phang does subtle things with the dialogue and the editing to make the future slightly difficult to understand and more like a puzzle, narratively speaking. Phang's puzzle-like storytelling approach is reminiscent of one of my favorite Steven Soderbergh movies, The Limey, and it made me wonder at times if the entire movie was actually a flashback inside Gwen's head, just like how The Limey interestingly implies that Terence Stamp is playing back the entire movie in his head on his flight home to England. Even composer Timo Chen's Advantageous score is as similarly ethereal as Cliff Martinez's score to The Limey, and on his YouTube account, Chen details the unconventional ways he performed his effective score, like the sliding of a toothbrush across piano strings or the use of a sex toy as a plectrum.

As Chen says, Phang's puzzle-like approach inspired him "to develop new tools to play [instruments] in different ways." That phrase could also describe how a new and much-needed voice in sci-fi like Phang's takes a familiar, Children of Men-style dystopia and plays that dystopia in a different way by filtering it through her rarely acknowledged--and rarely visible on the screen--perspective: the perspective of women of color who are clearly fed up with classism, ageism, sexism and racism. Advantageous is an angry political work, but it's also hopeful about social change and fortunately, not completely humorless. Instead of Jeong supplying the film's humor, its humor emerges in the way Gwen and her co-workers sound exactly like Hollywood types when they discuss their work, like when Urbaniak's character says to Gwen, "We're obligated to go a different direction for the face of the Center."

Kim--whom Star Trek heads will remember as Sulu's grown-up daughter in Star Trek: Generations and who gets to show far more range in Asian American indie projects like Advantageous rather than in something like Generations--clearly took her experiences of hearing the drivel of Hollywood casting directors who babble in coded language about race and worked those experiences into the film's script. So Advantageous also becomes a satirical comment on Hollywood's treatment of Asian women and its tendency to either whitewash characters who were Asian females in the source material (like when Arrow changed the DC Comics character Sin from an Asian girl to a white one) or cast in leading roles Asian performers who look "less Asian" and are closer to Hollywood's beauty standards. 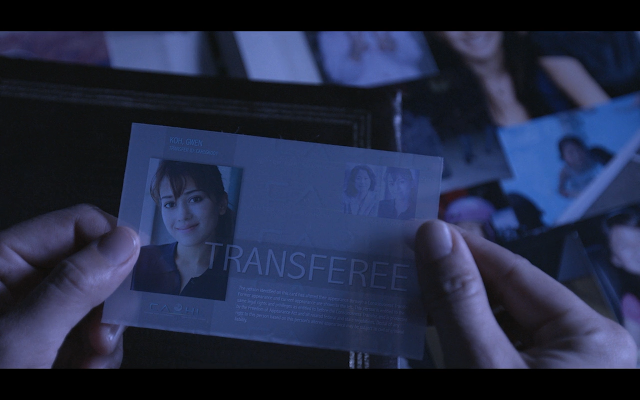 Gwen is so brainwashed from her days of working at the Center that when she chooses her new body, it turns out to be, of course, a racially ambiguous one. Gwen 2.0 (Freya Adams) may look as outwardly pretty as the city she's been raising Jules in, but just like the city, the new Gwen's concealing an enormous amount of pain and unease. In a manner that brings to mind how the late Roddy Piper so gruffly and amusingly tried to get anyone in L.A. who hadn't joined the alien invaders--as well as the Reagan-era theater audience--to listen to him about the world around them during John Carpenter's classic dystopian satire They Live, Advantageous dares us to stop taking a blind eye to that same kind of pain and unease that exists outside the screen (and on the streets of present-day cities or in the power structures within our own Center-like workplaces) and take a closer look.