"Brokedown Merry-Go-Round" Show of the Week: Rick and Morty, "The Ricks Must Be Crazy" 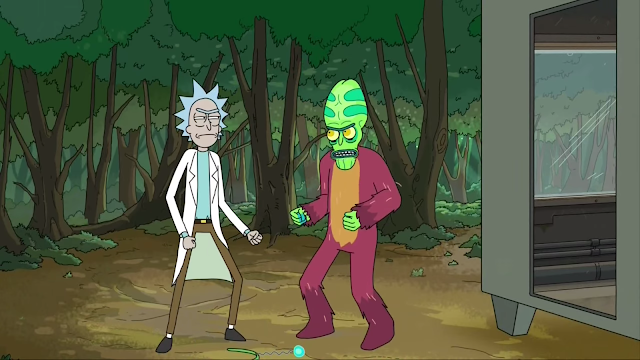 "The Ricks Must Be Crazy" feels like somebody on the Rick and Morty writing staff had a chip on his shoulder about Tron: Legacy, especially the ways it handled its premise of Jeff Bridges creating an entire universe full of sentient life inside a computer, and he didn't care for what he felt was a simplistic screenplay. Tron: Legacy is a good example of both the story serving the visuals rather than vice versa--however, director Joseph Kosinski's style-over-substance approach still couldn't stop me from watching Tron: Legacy in IMAX 3D twice because, holy fuck, that movie looks mesmerizing in IMAX 3D--and those visuals being made to look so sumptuous that they're able to distract the audience from thinking too long about the story's plot holes or unexplained details. Some of the questions that arose from those unexplained details included "How's it possible for Jeff Bridges and his family to enjoy a meal of lechon if fresh meat is impossible to bring into the Grid?" and "Was there a Filipino chef in Jeff Bridges' family whom we never knew about?"

A lot of why "The Ricks Must Be Crazy" is a highlight of Rick and Morty's second season is due to how much fun Justin Roiland, Dan Harmon and credited episode writer Dan Guterman are clearly having over imagining if Jeff Bridges could leave and re-enter the Grid freely instead of being imprisoned there by his evil doppleganger/digital avatar Clu and what would happen if Jeff Bridges craved power as much as Clu does and he turned out to be an even bigger dick than the marginally flawed, almost Fred MacMurray-like Zen inventor dad we saw in Tron: Legacy. "The Ricks Must Be Crazy" reveals that Rick has created an entire infinite universe inside the battery in his space car, and its inhabitants' only purpose in life is to power Rick's car battery. "That's slavery!," counters an appalled Morty when Rick introduces him to what he calls the microverse.

Instead of the more simplistic scenario of a completely evil duplicate of the universe's creator betraying that creator by enacting ethnic cleansing and plotting to rule the world outside the universe's barriers, one of the microverse's inhabitants, a Frank Grimes-ish scientist named Zeep Xanflorp (special guest star Stephen Colbert, whose Colbert Report writing staff happened to include Guterman), refuses to fall for Rick's white savior act like everyone outside the scientific community in the microverse. Zeep is on to some of Rick's deceptions. Those deceptions range from Rick disguising himself as an antennaed alien savior whenever he visits the microverse to Rick telling the microverse's inhabitants that the middle finger is a peaceful greeting.

Whether it's Zeep--or the space car security system Rick programmed to keep Summer safe within the space car when she's not allowed to accompany her grandpa and her brother at a certain point during the trio's night out for ice cream and a PG-13 movie on an alternate Earth--Rick's creations all inherited their creator's dickish and easily bored personality. When Summer expresses her objections to the talking space car (Kari Wahlgren) about the bloodshed and cruelty the space car is willing to resort to in order to protect Summer, the space car responds to her with "My function is to keep Summer safe, not keep Summer being, like, totally stoked about, like, the general vibe and stuff. That's you. That's how you talk." They really are their creator's children.

Tron: Legacy and a much more detestable animal than Tron--all those self-aggrandizing movie star vanity projects in which white stars imagine themselves as saviors of less civilized classrooms or neighborhoods or nations or microverses--aren't the only things that appear to be mocked by "The Ricks Must Be Crazy." The episode also appears to be making fun of the benevolent façade the Silicon Valley tech world likes to put on to distract people from how it reinforces the same old evils and inequities of other industries or business communities like Wall Street (like Tajai from Souls of Mischief once said, "Eventually #Hipsters bathe, shave and become the 'out' republicans [sic] they are"). Doesn't that kind of "we're here to help make your world a better place" façade just remind you a bit of those aliens from the Twilight Zone episode "To Serve Man"? "Gooble boxes," the term the microverse inhabitants adopt for the technology they are unknowingly using to keep themselves subjugated, is clearly the writers' reference to a certain much-criticized corporation with benevolent-looking branding that happens to own the platform that makes this blog post possible. Whattup, Google/NSA.

A certain segment of the TV critic community is understandably tired of narratives about middle-aged or old white anti-heroes. But when a Rick and Morty episode like "The Ricks Must Be Crazy" mines so much darkly comedic gold out of the behavior of Rick and his creations (behavior that Morty and Summer find to be appalling and sociopathic, but Rick's pragmatic way of handling things ends up being the most sane way to respond to a much more insane multiverse) and is visually and narratively inventive (and also perfectly casts a former Comedy Central prankster and a current Comedy Central prankster as pranksters on an epic scale), I say, "Bring on the anti-hero narrative again." Shit, Rick may not even be totally white--his last name is Sanchez and he's probably a white-looking half-Latino like Louis C.K.

It's a relief to see Rick and Morty reverting back to exploring moral quandaries like it has done in such episodes as "Mortynight Run," especially after the previous week's slight misfire, "Get Schwifty," which felt more like a South Park episode than a Rick and Morty episode. It was as if Trey Parker and Matt Stone guest-wrote Rick and Morty and were in the mood to insert another round of their usual barbs about either non-Lorde pop music (although the "Get Schwifty" original songs performed by Roiland and series composer Ryan Elder are amusing, "Love Power" from The Producers-ish spoofs of lyrics from either twerking anthems or EDM) or reality TV. Humor about reality TV stars like Ice-T--a favorite celebrity impression of Harmon's during Harmontown--isn't really Rick and Morty's strong suit. Also, Rick is a less interesting character when he has to play the Doctor and save Earth from disaster (in this case, the trigger-happy judges of an intergalactic reality TV pop music songwriting contest) instead of being the cause of mayhem.

It's hard not to dislike a piece of TV that takes a bit of that mayhem and uses it to briefly riff on Turbo Teen, a short-lived '80s Saturday morning cartoon about a teen who transforms into a Pontiac Trans Am whenever he perspires or eats a spicy burrito. "The Ricks Must Be Crazy" also reveals that Rick implanted Morty with a subdermal chip that can trigger dormant nanobots in Morty's bloodstream to restructure his anatomy and turn him into a getaway car during emergency situations. The nanobots fail to get going--until the show's funniest post-credits tag ever, nicely presented without any dialogue. I wish I could say Turbo Teen was really a joke Robert Smigel and J.J. Sedelmaier came up with, but nope, it's what passed for Saturday car chase action fare when I was a kid. You take one look at Brett Matthews' knuckles morphing into tires, and you're like, "Wow, the things Ruby-Spears employees used to come up with after doing trail-of-tears-length lines of coke."

Other memorable quotes:
* Rick: "I guided your entire civilization! Your people have a holiday named Ricksgiving! They teach kids about me in school!"
Zeep: "I dropped out of school. It's not a place for smart people."
Morty: "Ohhhhhhh snap!"

* Rick: "Would it be possible for us to get some kind of tour of your miniverse from the inside?"
Zeep: "This isn't a fucking chocolate factory. I don't have time!"

* Zeep: "That's what you used my universe for?! To run your car?!"
Rick: "Yeah, but don't flatter yourself! There's always AAA, you fucking cocksucker!"

* Zeep: "I crafted the guy that created the planet you're standing on!"
Rick: "Yeah, and I made the stars that became the carbon in your mother's ovaries!"

* Rick: "Don't blame my ship!"
Summer: "It melted a child! It killed itself!"
Rick: "My ship doesn't do anything unless it's told to do something! I don't even wanna hear it, Summer... Your boobs are all hanging about, and you ruined ice cream with your boobs out!"
Posted by J. John Aquino at 12:30 PM