The Ref, whose score album will be looped on AFOS on Christmas, is the best holiday flick Netflix doesn't carry right now


Even on DVD, director Ted Demme's 1994 Christmastime comedy The Ref--which, even though it was made for only $11 million, flopped at the box office but became a cult favorite afterward--still can't catch a break. While attempting two weeks ago to add The Ref to my Netflix queue so that I could rewatch it in time for the holidays, I received the following message from Netflix: "Available 1/1/2015."

Excuse me? January? After the time of the year when The Ref takes place? This isn't the first time the words "The Ref" and "lousy timing" were in the same sentence. One of the reasons why it flopped was because Touchstone Pictures dumped it in theaters in March instead of releasing it during the holiday season. The studio executive who made that scheduling decision probably also believes that Fox should go back to unveiling The Simpsons' annual "Treehouse of Horror" episode after Halloween or that presents should be opened after Christmas.

The Ref, whose out-of-print score music by David A. Stewart will be looped on AFOS all Christmas Day long (this Thursday), doesn't deserve this kind of treatment. Demme's 20-year-old movie is one of the best anti-Christmas movies ever made, although "anti-Christmas" wouldn't be a completely accurate description of the movie's attitude towards Christmas because not even its ending is totally immune to the holiday spirit. The Ref's attitude is more like "anti-Christmastime sentimentality" and "anti-fake and callous people during Christmas."

The movie's title refers to Denis Leary, who stars as Gus, a hapless burglar who's forced to play both referee and marriage counselor to the two constantly bickering hostages he's taken while hiding in the Connecticut suburbs from cops on Christmas Eve. Those hostile hostages (outside America, The Ref is called Hostile Hostages, which makes it sound like a Woody Woodpecker cartoon) are the yuppie couple of Lloyd Chasseur (Kevin Spacey), an unhappy antique store manager, and his adulterous and equally unhappy wife Caroline (Judy Davis).

As the night wears on, Gus finds himself becoming Lloyd and Caroline's hostage, and the Chasseurs' arguments about their failing marriage, the class conflict between Gus and the suburbanites and the battle of wills over who has the upper hand in the hostage situation aren't the only battles of wills during the film. There's also the game of cops and robbers between the largely incompetent local police force and Gus; the mental duel between the Chasseurs' juvenile delinquent son Jesse (Robert J. Steinmiller Jr.), who's home from military school, and Siskel (J.K. Simmons), the military instructor he's blackmailing; and the battle of wills between Lloyd's visiting mother, the heartless Rose Chasseur (Glynis Johns), and practically everyone else, including her own son. The character of Rose brings to mind the late Sir Peter Ustinov's frequent description of his famously curmudgeonly Spartacus co-star Charles Laughton: "Somebody who was hanging around waiting to be offended."

Countless Christmas movies have posited that Christmas can be the most stressful of holidays, whether it's Home Alone or It's a Wonderful Life, but Demme's movie is one of the few that emphasizes and captures quite well something many adult viewers can relate to: the discomfort and nasty invective experienced by family members who hate each other and are forced to be in the same room together on Christmas. Screenwriter Richard LaGravenese, who co-wrote The Ref with his sister-in-law Marie Weiss, drew these scenes of discord from their own experiences at holiday family dinners ("Both Marie and I are Italian Catholics who married into Jewish families, so we do have those big holiday dinners. Families always have these unspoken dramas," said LaGravenese in 1994). They wanted to explore what would happen if the unspoken tensions during those occasions stopped remaining silent and everyone started being honest. Humor mined from uncomfortable and boozy holiday family gatherings is why SNL's fake Dysfunctional Family Christmas record album commercial ("Leave me alone, please go away/I'm doing fine, just get away") remains one of the show's most beloved sketches from the early '90s, and it's also why The Ref built up a cult following after its release. 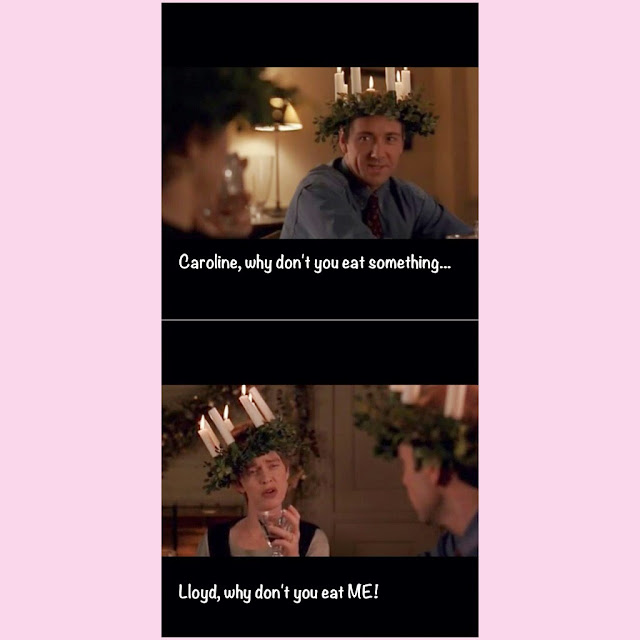 The cult following is also due to the invective being really nasty (even more so than in other non-traditional Christmas movies that aren't Bad Santa) and delivered beautifully by everyone in the cast, including Leary, Davis and Spacey, who, in 1994, was already a respected actor whom theater or TV critics would frequently write hosannas and sonnets for, but he wasn't yet a movie star. Although the late Demme said in a 1994 New York Times News Service interview that he didn't cast huge stars because he wanted "an everyman, underground, edgier feel to the characters," The Ref was built and marketed as a star vehicle for Leary, whose rants in a series of Demme-directed MTV interstitials had just brought him notoriety and whose film work at the time consisted of showy supporting roles in action flicks like Demolition Man and Judgment Night. But because The Ref didn't become the breakout success that would have taken the Worcester, Massachusetts-bred stand-up's film career to another level, instead it's better remembered as the place where Simmons--now a likely Oscar contender for his role in Whiplash--had his first feature film role. (His bit part as Jesse's stripper-loving military instructor was named after Gene Siskel by LaGravenese as a form of revenge after Siskel trashed his screenplay for The Fisher King.)

The Ref is also the place where I first took notice of Christine Baranski, who's excellent as the film's second most hateable woman, Lloyd's bossy sister-in-law, and is one of many theater-bred actors in the cast who make The Ref gel so well, as if it were a snappy stage farce with twice more F-bombs than Avenue Q. There are so many pointless stage versions of movies, whether it's Legally Blonde: The Musical or Shrek: The Musical. Because of LaGravenese and Weiss' hilarious script and the incisive dialogue, The Ref is far more deserving of the stage treatment than those movies. It's the kind of movie that, with the right stage director and the sharpest actors, would kill as a stage play (but not as a musical because that musical would be awful). Imagine the reactions Lloyd would receive from the theater audience when he finally tells off Rose ("You know what I'm gonna get you next Christmas? A big wooden cross. So every time you feel unappreciated for all your sacrifices, you can climb on up and nail yourself to it."). People would be howling just like the studio audience did when the late Greg Giraldo verbally handed Leary his ass on Tough Crowd with Colin Quinn.

The enjoyment viewers of The Ref get from scenes like Lloyd's verbal comeback to his evil mother is why Netflix's inability to carry the movie at the most appropriate time of the year--which also denies people who aren't familiar with the movie and are in the mood for a largely non-mushy holiday comedy the chance to discover it--is so maddening. The Ref is oddly comforting for people who find the holiday season to be far from comforting.

David A. Stewart's score from The Ref will be looped in the "Yell Log," all Christmas Day long (Thursday, December 25) on AFOS.
Posted by J. John Aquino at 11:30 AM