The best anthology show I saw this year first aired three years ago in the U.K.

My favorite anthology show of the moment is one I watched for the first time when all six of its episodes so far became streamable on Netflix in America just last week, but international viewers, Americans who were able to catch it on DirecTV's Audience Network last year and, of course, torrenters have been aware of it for quite some time. Even though its first season premiered three years ago on Channel 4 in the U.K., Charlie Brooker's Black Mirror easily trounces Fargo and True Detective--or as a Yo, Is This Racist? reader wanted to rename it, White Men Talking, Black Men Listening--as an anthology show.

While Fargo and True Detective are anthologies with a self-contained season format that was first popularized by American Horror Story, Black Mirror opts for the older Twilight Zone/Outer Limits self-contained episode format. Before Black Mirror, I was only familiar with Brooker's work as a satirist in the mold of The Daily Show and The Soup and an essayist castigating The Dark Knight and Skyfall for being too po-faced as action entertainment, so I was initially surprised by the unrelenting bleakness and serious questions about technology, social media and celebrity culture on Black Mirror. It's akin to Daniel Radosh or his former fellow Daily Show staff writer Wyatt Cenac suddenly wanting to write and produce The Twilight Zone. As Brooker said during Black Mirror's first season in 2011, his show raises the question "If technology is a drug--and it does feel like a drug--then what, precisely, are the side-effects?" On Black Mirror, the side effects are, of course, not pretty.

The first season of the original version of The Outer Limits was noteworthy for featuring in each episode what Outer Limits showrunner Joseph Stefano referred to as "a bear," which he explained was "that one splendid, staggering, shuddering effect that induces awe or wonder or tolerable terror or even merely conversation and argument"--or in other words, the creature of the week. On Black Mirror, the bear is YouTube or the iPhone--or in the show's more fantastical episodes, it's a chip in your skull that can record everything you see (and then play the footage back to you in your head) or a digital incarnation of your dead lover that can replicate that deceased individual's personality and sense of humor. That particular Black Mirror episode about a dead lover's return, "Be Right Back," is, interestingly, like a precursor to those gender-reversed Her parodies that were all over the Internet earlier this year, but darker and sadder (and anchored by an effective performance by Hayley Atwell, a.k.a. Agent Carter).

Where Black Mirror differs from the '60s sci-fi anthology shows that influenced it--other than the sex scenes and profanity, of course--is its unwillingness to hold the viewer's hand as it immerses the viewer in whatever future world it posits in each installment. There's no Rod Serling or Control Voice to provide soothing exposition; Brooker never turns up on screen or in a voiceover with some overly flowery intro to set up the future world of the week. That's one reason why "Fifteen Million Merits" is my favorite Black Mirror episode. It's set in a future where the working class is forced to pedal exercise bikes that power an unspecified energy source--the workers are paid in "merits" that they're required to spend only on porno videos and pointless apps for their avatar or "doppel"--and the episode outlines the rules of this dystopia in only visual terms, a very cinematic approach to storytelling beautifully and confidently laid out by veteran modern Doctor Who director Euros Lyn.

Daniel Kaluuya stole The Fades as the lead hero's nerdy, Mork & Mindy-loving best friend (in fact, back when Agents of S.H.I.E.L.D. hadn't hit its stride yet and was struggling to figure out what to do with Fitz, the supergenius character played by Kaluuya's Fades co-star Iain De Caestecker, I initially wanted Agents to replace De Caestecker with Kaluuya), so it's a bit jarring to see this guy who was such a charismatic chatterbox on The Fades robbed of his voice at the start of "Fifteen Million Merits." Kaluyya doesn't speak for about the first 15 minutes, but he's terrific at expressing his worker character's ennui with just his face and posture--I had flashbacks to Charlie Chaplin in Modern Times. In fact, that's what "Fifteen Million Merits" carries echoes of: a little bit of Modern Times with a smidgen of THX-1138 and a shitload of the Axiom from WALL•E, but with the added twists of both a reality TV talent show as the primary escape route for the working class (Brooker's wife Konnie Huq, who co-wrote "Fifteen Million Merits," skewers her own reality TV hosting past here) and a clever visual metaphor for "people who live in their phones." 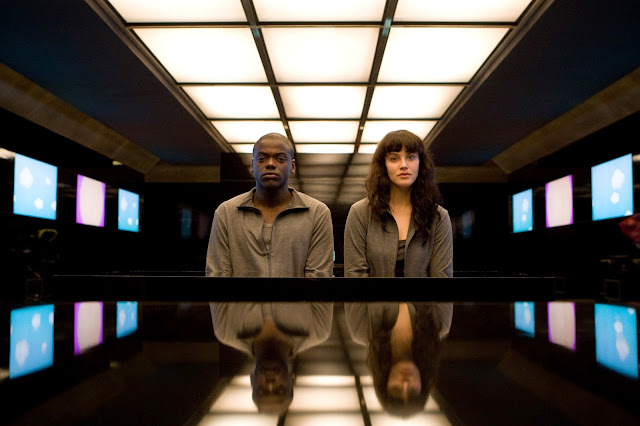 Other than MC Bashy's hideous attempt at an American accent while portraying a talent show judge, the most disturbing thing about "Fifteen Million Merits" is how much this world where workers must live in cramped cells that look like smartphone menu screens--and where a female contestant like Abi (Jessica Brown Findlay, a.k.a. "Way Hot" from Downton Abbey) has such depressingly limited showbiz career options--isn't too far off from our own. I refuse to get a smartphone. I don't want to be a smartphone zombie. "Fifteen Million Merits" is a great argument for why some of us refuse to get bitten.

Kaluyya and Findlay's episode is Black Mirror's second episode, but it really should be your intro to Black Mirror if you haven't streamed it yet. It's where Brooker's blend of satire and despair first truly comes alive. Like Alan Sepinwall said, "Fifteen Million Merits" better represents what Black Mirror is capable of--and how unconventional and imaginative it is as an anthology show--than "The National Anthem," the more conventional premiere episode. However, "The National Anthem" is hardly as mediocre as "The Waldo Moment," Black Mirror's last episode before the show's return to Channel 4 next week (on December 16, to be exact) in the form of a Christmas special guest-starring Jon Hamm and Oona Chaplin.

I like what "The Waldo Moment" says about how an apathetic attitude towards democracy can be destructive; I just don't like the way it's executed. It's the show's only dud so far (the fact that "The Waldo Moment" was a rejected script idea from a completely different show explains much of its clunkiness). Remember the Star Wars Machete Order? A Star Wars fan suggested to other fans that they should try rewatching the pre-Force Awakens films in a different order: the 1977 Star Wars and The Empire Strikes Back first, followed by Attack of the Clones and Revenge of the Sith, and then Return of the Jedi as the final installment, with no need to suffer through The Phantom Menace again. Because Black Mirror's episodes are self-contained, they can be watched in any order, so for Netflix viewers who are about to discover Black Mirror, I've come up with the Black Mirror Machete Order.

This rearranges the order of Black Mirror episodes so that the strongest episodes are first--"Fifteen Million Merits," "The Entire History of You" and "Be Right Back"--followed by the slightly lesser "National Anthem." Under the Machete Order, Black Mirror doesn't end with a whimper and wraps up instead with a gut-punch of an installment, "White Bear." It's best to not know anything at all about "White Bear" before watching it. Like "Fifteen Million Merits," "White Bear" excellently immerses the viewer into its future world through largely visual storytelling, and then like the most unnerving past works of horror anthology TV--the '80s Twilight Zone's "Gramma" comes to mind, as does "Home" from the quasi-anthology that was The X-Files--it proceeds to sock you in the nads. Then after you stream those episodes, read the thoughtful essays Emily Yoshida wrote about each episode back when she was a Grantland staffer (she's now with The Verge).


At about this time last year, the Seattle hip-hop group The Physics released Digital Wildlife, a finely crafted concept album that could function as an aural companion piece to Black Mirror. Both the Physics album and Black Mirror explore the idea that digital advances may be improving a few aspects of our lives, but those advances haven't yet been able to delete human problems like loneliness or concealing lies. But Black Mirror goes a step further and straight-up says those problems can never be deleted. They'll only get worse at the rate humanity is going. Somewhere, Kip Dynamite is eating his words.

Both seasons of Black Mirror--just three episodes each--can be streamed on Netflix. The original Twilight Zone, a huge influence on Black Mirror, was turned into a 1983 feature film that remade three of the '60s show's episodes. The John Landis and Steven Spielberg segments suck, but the Joe Dante and George Miller segments are excellent, as is the late Jerry Goldsmith's original score. Goldsmith's Twilight Zone: The Movie end title music isn't currently in rotation on AFOS, but it ought to be.