"Brokedown Merry-Go-Round" Show of the Week: Bob's Burgers, "Father of the Bob" 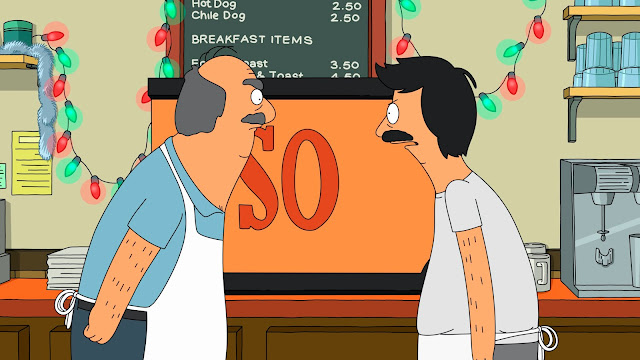 One of my old day jobs was writing for a weekly newspaper, and I was assigned to write really hard-hitting stuff: a series of short profiles of restaurateurs in one of San Jose's gazillion Camazotz-esque suburbs. One week, I chose a matzo ball soup place to be the paper's local eatery of the week, and the discussion of the opening of that old restaurant reopened a rift between the two brothers who ran the joint. Yeah, I really enjoyed being the cause of two family members beefing over who played a bigger role in the family business.

The conflict between Bob and his estranged restaurateur dad Big Bob in "Father of the Bob," this year's Bob's Burgers Christmas episode, brings back memories of that matzo ball soup feud I somehow reignited. Except this conflict is way more entertaining and headed towards some sort of resolution. Big Bob sort of appeared on Bob's Burgers before, but he was kept off-screen in a flashback and voiced by H. Jon Benjamin; in his first full appearance, Big Bob--now voiced quite convincingly by a young guy who's had plenty of experience portraying old, cantankerous men, Bill Hader--is alive and well and still running Big Bob's Diner, a far more popular local eatery than Bob's Burgers. The diner, which had previously appeared in pictures on the Belchers' apartment walls, is also the place where the younger Bob honed his skills as a craftsman of gourmet burgers with puntastic names--before a grill-side argument with his dad led Bob Jr. to go into business for himself. 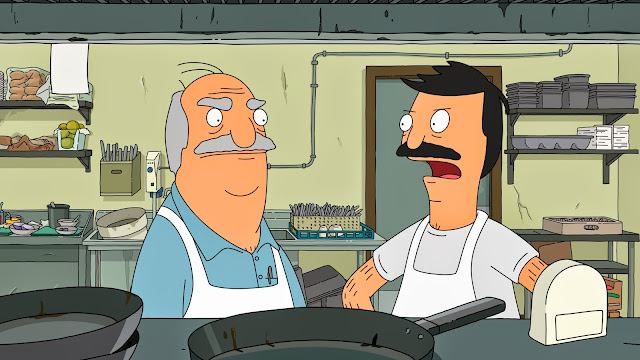 This half-hour Christmas present from episode co-writers Steven Davis and Kelvin Yu comes wrapped in the form of both a nifty mini-origin story for Bob Jr.'s restaurant and a father/son reconciliation story that carries some echoes of the reunion between Krusty the Clown and Jackie Mason's Rabbi Krustofsky, who, like Big Bob, was embarrassed by his son's comedic approach to things (in Big Bob's case, his son's interest in inventing what he dismisses as "gimmick burgers" was what he objected to most strongly). But as much as I adore the classic-era Simpsons episode "Like Father, Like Clown," I always found its closing "O Mein Papa" sing-along between Krusty and his dad to be a bit schmaltzy for my tastes. Bob's Burgers is much more restrained when it comes to heartfelt moments, which is more effective to me than teary renditions of sappy German oldies, and that perhaps is due to the input of co-executive producer Jim Dauterive, who seems to have emulated that restrained approach to heartfelt moments from his previous show King of the Hill.

When "Father of the Bob" finally does arrive at that reconciliation between Bob and his dad, it brilliantly places it in one of the least likely settings for a serious heart-to-heart about raising kids, remorse for having been an inflexible parent and coping with an absent wife: a crowded country/western line dance. I just love how Bob awkwardly tries to keep up with the rest of the dancers while the much less awkward Big Bob--who's learned to line-dance in his off-hours--finally opens up to him and makes the very first reference on the show to Bob's mom (it's not specified if she's dead or alive). It's one of many ways that Bob's Burgers gets playful with the obligatory emotional scene towards the end of most family sitcoms: by burying the emotion under music (or a scene location) that's all tonally wrong, like in the line-dancing scene, or by having the Belchers say "I love you" to each other so many times in the same sentence that it pisses off a bystander. 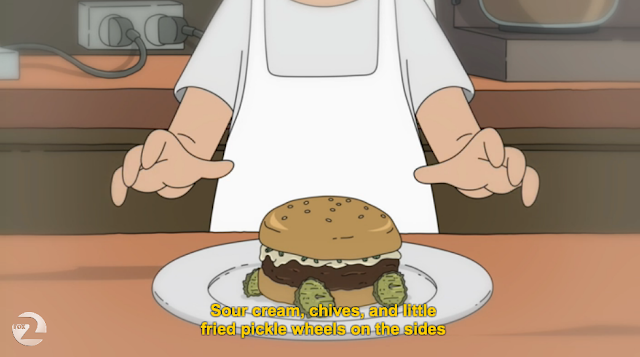 But before that truce at the line dance, the two Bobs reignite their longtime disagreements over cuisine and customers' preferences. I also love the episode's implication that every restaurant in the show's unnamed town has a Teddy--a meek guinea pig for the chef's culinary experiments--and at Big Bob's Diner, that would be Henry (Carl Reiner), who isn't a relative of Teddy's, but the character's nose design is similar to his. (It's like how several of the Acme Looniversity students on Tiny Toon Adventures had similar facial and behaviorial attributes to teachers like Bugs Bunny and Daffy Duck, but they weren't relatives or offspring of the faculty.) At his latest reluctant Christmastime visit to Big Bob's Diner, Bob tries to prove wrong his dad's opinions about gimmicky burgers and culinary experimentation by getting Henry to enjoy his Baby You Can Chive My Car Burger, one of many "jokey burger specials" that Big Bob expressed his disdain for during the grill-side argument that drove away--no pun intended--20-something Bob from his diner. Meanwhile, Big Bob tries to lure Henry away from Bob's burger with a simple tuna melt.

The competitive nature of the A-story (mirrored in the B-story of the kids competing to create the best present for Bob out of stuff in their grandpa's basement) is, to me, the most Christmassy part of "Father of the Bob," even more so than father and son putting aside their differences just in time for the holiday. Because Christmas isn't really "chestnuts roasting on an open fire," like Madison Avenue would rather have you believe. Often, it's more like "chumps trampling each other in a Walmart." Or two brothers embroiled in an old matzo ball soup feud. 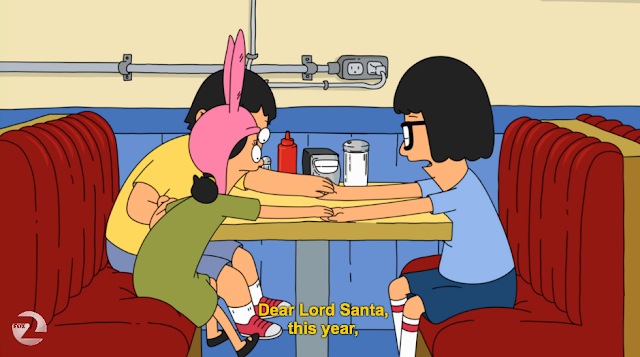 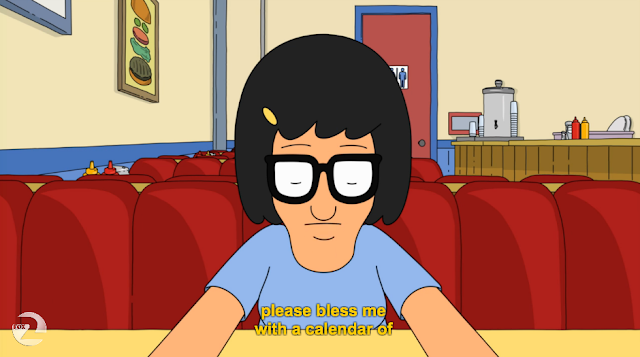 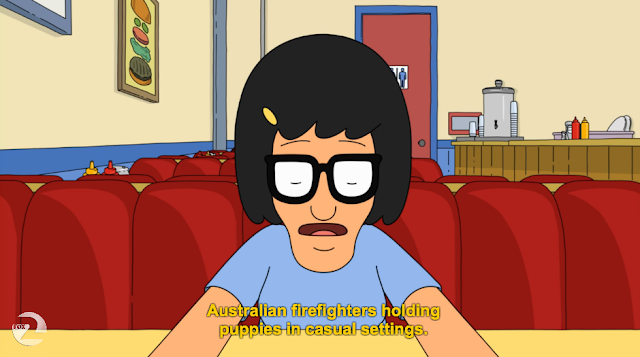 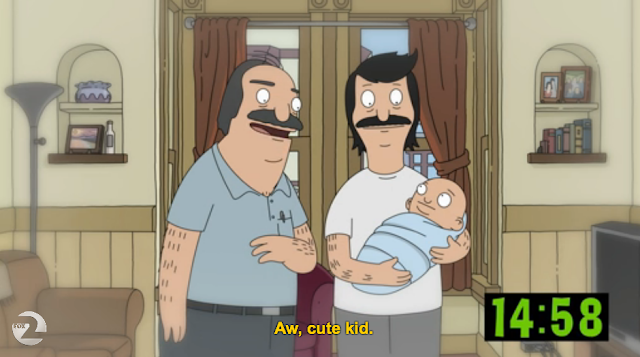 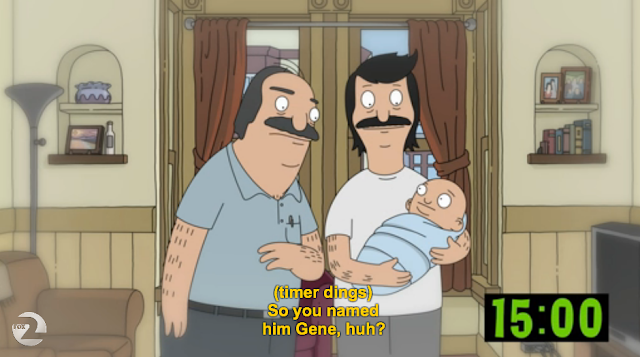 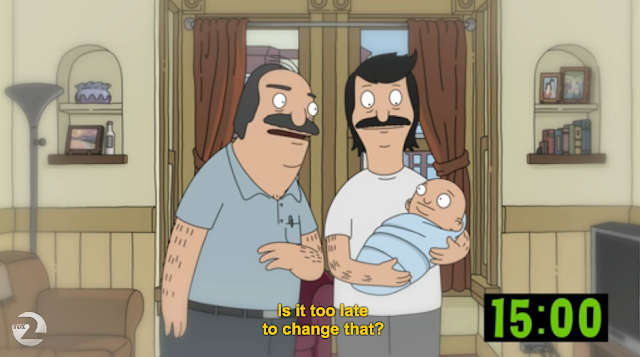 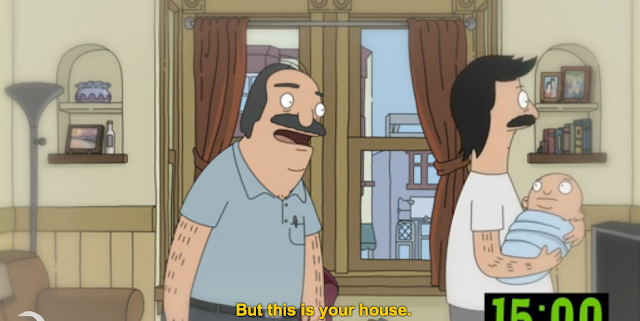 * Bob discovers that his dad kept in his basement a copy of the first review of Bob's Burgers: "Unique burgers. Good prices. Service leaves something to be desired. But worth the trip." That sounds a lot like many of the reviews the show first received when it premiered on Fox.

* Pete (Nick Offerman), Big Bob's best friend, to Bob: "Your dad's in my bar. We're gonna go see him."
Tina: "Yeah, Dad. When a mysterious cowboy/Santa says, 'Come with me,' you climb on that horse and ride."

* Bob: "I thought this was a disco."
Pete: "That's Wednesdays. Thursdays, we watch Scandal."

* Bob, regarding the line-dancing thing: "You guys are really good at this."
Big Bob: "I'm here every Friday night. And Thursdays. I love Scandal."

* The following is from an ad-libbed scene between Bob, Big Bob and Linda that wasn't included in "Father of the Bob" for obvious reasons:
Bob: "You used to drink so much Baileys."
Big Bob: "I would smell it from across the room. There was a very nice restaurant, or, uh, like more like a dessert place across the street, and it would waft across the street, and it would come in, and the next thing I know, I'd be strangling your mother, every fucking scent in the whole place..."
Bob: "You were the only drunk who exclusively drank Baileys."