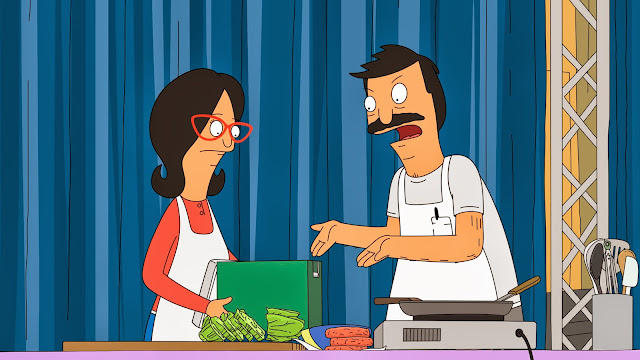 Of all the fictional restaurants I wish would exist, I would probably most want to sample a burger made by the titular restaurant on Bob's Burgers--nominated this week, by the way, for two Annie Animation Awards, including Best Series--because of the creativity Bob brings to the Burgers of the Day that he lists on his restaurant chalkboard. I'd be most interested in the Roquefort Files Burger--awesome pun--or the Bruschetta-bout It Burger, a rare burger that actually wasn't on Bob's chalkboard.

I'm not the only one who wishes Bob's Burgers were a real restaurant: several viewers have become inspired by the show and have posted their attempts to make the show's gourmet burgers, with the most notable example being Cole Bowden of The Bob's Burger Experiment. In "Best Burger," Bob introduces the Bet It All on Black Garlic Burger while competing in a local food festival's burger-tasting contest--by the way, Bowden posted that he's now working on the recipe for that one--and even though I'm not exactly a fan of garlic (and no, I'm not a vampire), I'm dying to try the black garlic burger, based on how much enjoyment the animators clearly had in animating and at one point, slo-moing the scenes where Bob and Linda prepare the meal on-stage.

This Bob's Burgers episode is a good example of how we long for not just the Belchers' restaurant to be real--we also want the food community within the show's unnamed East Coast seaside town to exist as well. In the funniest sequence during "Best Burger," Gene--whose ADHD can be detrimental to others like his dad, especially when he has to win a burger contest he drunkenly signed up for--attempts to make up for all his preceding screw-ups in "Best Burger" by delivering to Bob the missing bulb of black garlic he needs for his contest entry, and he's forced to ignore one food festival temptation after another in order to make it to Bob on time. An agonized Gene must race past free cupcake-flavored ice cream served on a waffle, as well as 10-for-$1 pizza tacos, "robot cake" and the ultimate culinary temptation, a hot fudge car wash, which sounds like an Urban Dictionary sex act. Fuck Brigadoon. Any food community that's got a hot fudge car wash is a more enticing spot than Brigadoon. 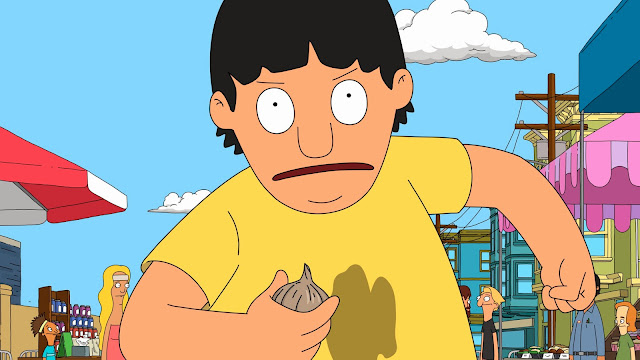 Written by Mike Benner, "Best Burger" is a solid Bob/Gene story and acts as sort of a companion piece to both "Beefsquatch," in which Bob seethed over an ape-masked Gene taking attention away from his cooking segments on TV, and "O.T. the Outside Toilet," which entertainingly intertwined sweetness with absurdity when Bob related to Gene the difficulty of looking after either a kid or a pet ("When you were a baby and I was watching you, you ate a fern, and you could have died, but you didn't"). Gene's most endearing quality is his attachment to his Casio keyboard and its wacky sound FX, something series creator Loren Bouchard lifted from his own childhood. That's probably about it in terms of endearing qualities for Gene. He's often the show's most obnoxious character--his shoutiness and attention-seeking childishness both sort of make me understand why some Bob's Burgers haters can't get past his (or Louise's) shoutiness to fully embrace the show--but "Best Burger" gives the character a chance to redeem himself via the aforementioned race against both time and hot fudge car washes.

However, this Gene episode is stolen by Kumail Nanjiani as affable Pakistani celebrity chef Skip Marooch and Thomas Lennon at his Ryan Seacrest-iest as smooth-talking local TV personality Chuck Charles, who emcees the contest and is still bitter over losing his morning talk show due to the Belchers' on-air antics in "Beefsquatch." He keeps blaming Bob for getting him fired and forgets that Linda's boob flash on live TV (in order to stop Bob and Gene from fighting) was what actually got him fired. I suspect Chuck doesn't blame Linda because he got to see her tits.

Chuck's appeared twice before on Bob's Burgers, but in the scenes where Chuck doesn't even bother to hide his disdain for Bob and barely listens to anything he says, Lennon--even more so than in his other guest shots as Chuck--really nails the smugness of these local news personalities who think they're hot shit in their mid-sized TV markets and who care more about how they look on camera than about doing any actual research or being a competent journalist. We've most recently seen that type of not-very-bright local news personality in the viral clip of an awkward Denver morning show interview with Kristen Wiig and Bill Hader (who, interestingly, reprises his role as Wonder Wharf worker--and now pedicab driver--Mickey in "Best Burger"). While promoting the release of their Sundance hit The Skeleton Twins from a press junket room in another city, the two SNL alums collapsed into laughter because their interviewer referred to what he mistakenly thought was a nude scene Wiig did in The Skeleton Twins, which led to the interviewer admitting that he never saw the film. Way to do your research, Denver.

Bound-to-be-viral local TV fails that bring to mind Wiig and Hader's incompetent interviewer are a form of shtick Bob's Burgers does well, in addition to the usual puns and accidental double entendres. "Best Burger" is full of moments about how sexual a lot of descriptions of either the act of eating food or the act of cooking often sound. One of my favorite of these double entendres is Chuck ending the contest with "Time's up! Hands off your meat, chefs." But what I like most about "Best Burger" is the little win Bob gets despite losing the contest. Think of it as the antithesis of "Family Fracas," which many Bob's Burgers fans hated because of how badly Bob got screwed over by his enemies in that episode. An even more affecting moment than Bob trying to tell Gene that "I love you and I love who you are" (which, of course, gets interrupted by Gene's ADHD) is Skip standing in line with a bunch of other curious foodies outside Bob's Burgers and wanting to try out Bob's black garlic burger, even though his Pomegranate and Green Chili Chutney Burger defeated Bob's burger in the contest.

It's affecting because Bob doesn't get to win so often on the show, not even during a competition that's totally in his wheelhouse, like the burger contest, and the sight of this competitor--who's also a chef he respects--suddenly wanting to sample one of his creations is somehow a greater victory than any trophy he could receive, whether it's the contest's burger-shaped trophy or outside the universe of the show, the two Annie Awards that Bob's Burgers is now up for. Sometimes, a trophy is just a trophy. 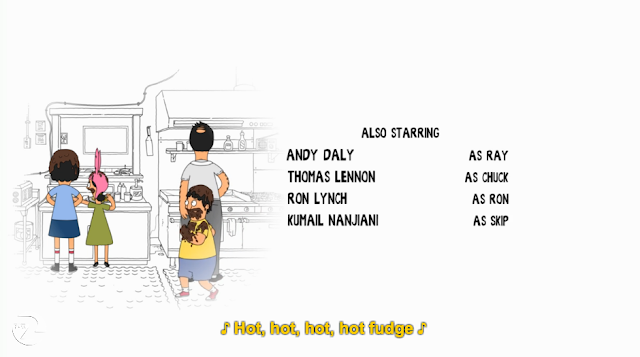 Other memorable quotes:
* Skip, referring to his grandmother: "She always told me, 'Put spice on everything!' She also said, 'I hate Mondays.' But she never got credit for that."
Chuck: "[Laughs with Skip.] I would love to meet her."
Skip: "Aw... too late."
Chuck: "Ooh."

* Bob: "It's made with black garlic. Uh, it's a fermented garlic. It comes from Korea."
Chuck: "Don't blame Korea for your stupid burger, Bob. Not fair to them or burgers."
Bob: "Uh, I'm not blaming them--"
Chuck: "The Stupid Black Garlic Burger! Put it up on screen."

* "Never trust a boy with a skateboard. They're too fast."

* "It's just that you always... I don't want to say screw everything up, but maybe Louise does?"

* "This has exquisite mouth feel." The animation for the burger judge's tongue as he wraps that tongue around the words "mouth feel" is hilariously creepy. Mike Benner tweeted that the creepy judge was voiced by Andy Daly. The star of the very funny Comedy Central show Review with Forrest MacNeil also voiced the Belcher kid-hating specialty food store owner, whose bulb of black garlic gets stolen by Louise to replace the one Gene accidentally smushed. (By the way, if you haven't watched the first season of Review yet, stream it immediately. Review is as addictive as the coke Daly's title character gets himself hooked on in the first episode.)