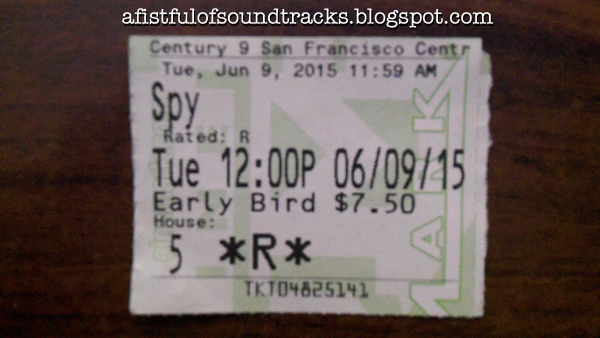 Every Throwback Thursday, I pull out from my desk cabinet--with my eyes closed--a movie ticket stub I didn't throw away, and then I discuss the movie on the ticket and maybe a little bit of its score, which might be now streaming on AFOS. Today, instead of drawing some random ticket, I'm intentionally pulling out the ticket that says "Spy," due to the Melissa McCarthy comedy's box-office success and the excitement over the beginning of the filming of McCarthy's Ghostbusters reboot. This will be the final post here on the AFOS blog before I take a two-or-three-week-long break from the blog in July. The blog--and that goes for the blog's year-long TBT series as well--will resume with new posts in the middle of July.

The least creative thing about writer/director Paul Feig's enjoyably foul-mouthed action comedy Spy is its title. Spy is also the title of a fairly recent Britcom about an MI5 agent and his 10-and-a-half-year-old son. The Feig movie's original title was Susan Cooper. By the end of the movie, Melissa McCarthy and Feig have created such a distinctive and likable new heroine--and managed to give her a satisfying dramatic arc in addition to her comedic antics--that you won't forget the name Susan Cooper, and her name deserves to be part of the branding of the super-spy franchise that will likely arise from Spy, much like how Austin Powers' name is part of the title of every movie of his and Jason Bourne's name is in the title of every Bourne movie, including ones he doesn't even bother to appear in.

But then again, Feig's the kind of director who seems to prefer movie titles that don't take up too much space on a marquee. I Am David, Bridesmaids, The Heat, Spy and Ghostbusters are all titles that are easy work for marquee changers, especially ones who'd get an anxiety attack after finding out they have to put the letters up for Those Daring Young Men in Their Jaunty Jalopies.


So had Sky 1 not come out with a show called Spy, I'd be more enamored with the movie's title because it nicely conveys in just three letters that Susan was born to be one. But because Spy is a comedy, the transition from mission control support to CIA field agent for Susan, who's a winning mix of Midwestern politeness and the fearlessness of McCarthy's Boston cop character Shannon Mullins from The Heat, isn't exactly a smooth one. That transition is initially loaded with the usual slapstick McCarthy frequently excels at, as well as the honest and comically appalled reactions many Feig characters have to any kind of mayhem (think the bridesmaids' varied reactions to food poisoning in Bridesmaids or Sandra Bullock amusingly panicking over a knife shoved into her thigh and wanting so badly to break her vow to never curse in The Heat). Spy arose out of Feig's wish to make a spy movie like one of his favorite movies, the 2006 version of Casino Royale, but because these are Feig characters, not Bond movie characters who respond to everything in the most badass and suave (as well as PG-13-friendly and extremely--and implausibly--sanitized) ways, they puke from the sight of accidentally impaling someone they've killed or launch into a barrage of F-bombs when they don't get their way.

But once McCarthy's Bridesmaids co-star Rose Byrne enters the picture and Susan becomes more confident about her field work and is able to infiltrate the Byrne character's enemy organization, thanks to a very particular set of skills (like intuition) that Susan's overconfident colleague/work rival Rick Ford (Jason Statham) is too bullheaded and inept to possess, Spy takes an interesting turn as a spy comedy. It becomes a comedy about an underestimated spy who's good at her job instead of incompetent (Get Smart) or competent but immature (Archer), which also makes it an intriguing companion piece to the Marvel Studios show Agent Carter, another story of a frequently underestimated female spy. But where's the conflict when the central character's a competent spy? Isn't that a comedy killer? When McCarthy has such great--and often improvised--dialogue and trades insults with the consistently funny likes of a perfectly cast (and perfectly big-haired) Byrne as a villainous arms dealer and Statham in what has to be the funniest and greatest role of his career as the hilariously useless Ford, nobody has to worry about the disappearance of humor.

In addition to being an homage to 007 movies (speaking of which, the best moments of Theodore Shapiro's original score are ones that channel lush John Barry and David Arnold travelogue themes like Barry's "Journey to Blofeld's Hideaway" from On Her Majesty's Secret Service and Arnold's "City of Lovers" from Casino Royale), Spy is also a gentle critique of those movies and their limited roles for women before Judi Dench took over as M and supplanted Bernard Lee as the definitive M in the public's eye. In the Roger Moore era of 007, McCarthy would probably be subjected to the same treatment Susan receives when the CIA boss (Allison Janney, a good foil to both McCarthy and Statham) sticks her with frumpy and way-too-conspicuous undercover identities. She'd likely get cast in one of those movies as some buffoonish stranger who makes clumsy advances at Moore's Bond--or that German wife who tries to stuff Bond's face with sausages and beer in Octopussy--instead of getting to play one of the heroes, simply because of the way she looks. In Feig's world of funny women of different shapes and sizes who are at the center of the action, that's not going to fly.

Spy's brazenness as a hard-R action comedy (and it's an occasionally graphic one too, like during the way Silicon Valley star Zach Woods gets written out of the movie) also sheds light on something that's bugged me about the 007 franchise for a while: the Broccoli family's steadfast attitude about those movies remaining family-friendly. The 007 franchise has frequently flirted with getting slapped with an R, whether it's the sex scenes or when Licence to Kill went all Scanners on a bad guy and blew up his head or when Mads Mikkelsen had some fun with Daniel Craig's nads instead of taking a bite out of his flesh in Casino Royale, but those movies would be a lot better if they were R movies, especially in an era when the public embraces Craig's darker take on Bond while action franchises like Terminator have stopped being R franchises and are chasing those dreaded PG-13s (Terminator: Genisys is PG-13, and one of the film's haters is partly blaming the pursuit of that rating for why he dislikes Genisys). 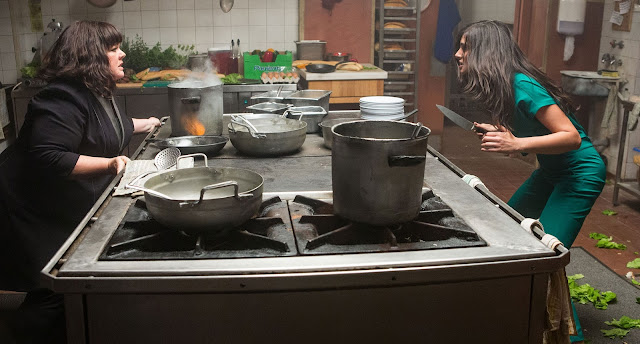 Bond movies were at their weakest when the Broccolis pushed their hardest to make the franchise family-friendly (*cough*the Moore era*cough*) and the intelligence community in those movies became about as dangerous as Herbie Goes to Monte Carlo. It got so bad that Pierce Brosnan appeared to be having more fun playing darker variations on Bond in hard-R movies like The Tailor of Panama and The Matador than actually playing Bond. That's why hearing M finally say "fuck" for the first time ever--in a situation that especially called for it--was such a wonderful and surprising moment during Skyfall.

Meanwhile, in Spy, everybody says "fuck" like in Feig's other hit comedies, and while that has the potential to become tiresome, it never does in Feig's hands. Enjoy the profanity while it lasts, people, because McCarthy and Feig's next film together is Ghostbusters, and I'm sure Sony would be thrilled about an R for Ghostbusters. Feig is the comedic shot in the arm the Ghostbusters franchise needs, especially after 1989's Ghostbusters II pushed too hard to be many things to different people, particularly the preteen fans of The Real Ghostbusters, and the result was a Three Men and a Baby clone rather than a great Ghostbusters follow-up. So Sony ought to let Feig do whatever he wants, and if they don't let him make an R-rated Ghostbusters, I hope they let him make both a family-friendly version and an unrated version because in this era of frequently bleeped-out ghost-hunting TV shows, nobody says "Oh fudge!" when they see a ghost.

The Spy main title theme "Who Can You Trust," an homage to 007 music performed by Ivy Levan and produced by Wet Hot American Summer composers Theodore Shapiro and Craig Wedren, as well as a couple of other selections from Shapiro's Spy score, all can be heard during the AFOS espionage genre music block "AFOS Incognito."