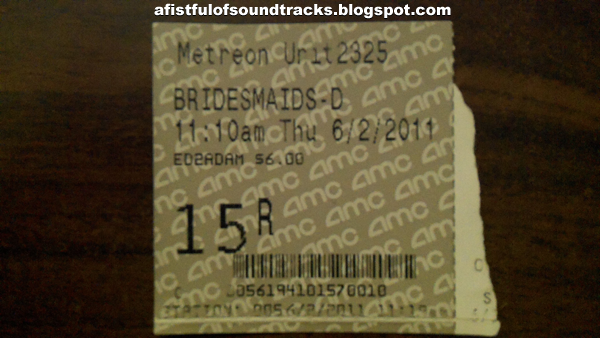 Every Throwback Thursday, I pull out from my desk cabinet--with my eyes closed--a movie ticket stub I didn't throw away, and then I discuss the movie on the ticket. Today, instead of drawing some random ticket, I'm intentionally pulling out the ticket that says "Bridesmaids" because of last week's release of the enjoyably subversive Spy, the third--and certainly not the last--film in a bunch of collaborations between Melissa McCarthy and director Paul Feig, whose successful partnership started with Bridesmaids.

The 2011 smash hit Bridesmaids may be the first Judd Apatow-produced comedy where I prefer the unrated cut on Blu-ray/DVD over the shorter theatrical cut. Unrated cuts of Apatow comedies usually wind up with a little too much filler--these already two-hour-plus comedies end up becoming even longer--but the unrated Bridesmaids cut rules over them all, simply because it contains a genuinely funny scene that should have been part of the theatrical cut. It's when star/co-screenwriter Kristen Wiig's character Annie (named after Annie Mumolo, Wiig's Bridesmaids writing partner)--a single lady in her late 30s who's not enjoying the loneliness of the single life and is worried that she's being similarly shunted aside by her bride-to-be best friend Lillian (Maya Rudolph)--gets grilled by the inquisitive son of one of her blind dates. The kid, who, of course, has no filter, is too young to understand that his questions and comments are on the rude side ("Your hair looks burned").

I can see why it was excised. Paul Feig--a longtime master of cringe comedy, whether it was in the episodes he directed for The Office or the material he wrote for Freaks and Geeks, the classic Feig/Apatow collabo that lifted tons of real-life cringeworthy moments from the adolescences of both Feig and Apatow--must have felt that Annie had been through enough humiliating moments in the theatrical cut already, and this awkward living room talk with the little boy was one too many. But the uncomfortable talk amusingly points out how Annie's douchey fuckbuddy Ted (an uncredited Jon Hamm)--the most evil character in the film, even more so than Rose Byrne's character, who, unlike Ted, actually changes and becomes less evil over the course of the film--behaves exactly like this kid. "Your hair looks burned" and "My grandma died where your sitting... right where your underpants are..." are lines that could have easily come out of Ted's mouth.

Also, I'm a connoisseur of scenes where actors are trying their damnedest not to laugh. Towards the end of the living room scene, Wiig can be seen breaking character and laughing, just like when she had to turn her face away from the camera during her MacGruber sex scene with Will Forte because his weird-sounding moans and the sweat droplets landing on her face were causing her to corpse. Part of the enjoyment of the living room scene is due to Wiig's own enjoyment of interacting with this weird kid, and her reactions bring to mind Eddie Murphy's visible amusement over Bronson Pinchot's ad-libs during Beverly Hills Cop, which Elvis Mitchell once pointed out as a rare moment of Murphy getting a kick out of letting another comedic performer upstage him.

In fact, quite a few of the other deleted scenes that made it to Bridesmaids' extended cut contain shots of actors corpsing or trying to hide it. The audio commentary even points out when Byrne--so good as Annie's wealthy and ultra-competitive nemesis Helen--is corpsing behind an airplane seat that's shielding her lips from the camera. She does it while watching Melissa McCarthy improvise dialogue as Megan--the amusingly unfiltered, Guy Fieri bowling-shirt-clad character who landed McCarthy a Best Supporting Actress Oscar nomination and kicked off a De Niro/Scorsese-style partnership with Feig that's continued with The Heat, Spy and next year's all-female Ghostbusters reboot featuring Thor as the new Janine--during Megan's attempt to seduce her seat neighbor (McCarthy's real-life husband, Tammy director Ben Falcone) as Annie's experiencing her pill-induced airborne meltdown. Also, Byrne's eyes are clearly saying, "Aw shit, Kristen, please don't cause me to corpse during this take," when she sees Wiig singing gospel in an old-timey voice. That's how funny the material in Bridesmaids was: not even the actors whom you'd expect not to corpse because of their largely non-comedic bodies of work (Byrne is best known for that hilarious knee-slapper of a show, Damages) were immune to corpsing.

Speaking of immunity, I've always been immune to chick flicks. During the holiday season, I'm allergic to Love Actually. I prefer Johnnie To over Johnny Depp. So I wouldn't have given Bridesmaids the time of day had I not known the Freaks and Geeks duo of Feig and Apatow was involved. But any time those two join forces, the results are bound to be terrific, and, of course, Bridesmaids turned out to be better than the average chick flick. It makes sharp observations about class issues (Annie is still reeling from the failure of her Milwaukee bakery, which she made the mistake of opening during the recession, and her economic woes are partly to blame for the dissolution of her friendship with Lillian) and the excesses and absurdities of American wedding culture. It doesn't end with Annie making a clichéd rom-com run through the city streets to tell Chris O'Dowd's cop character she loves him. Old SNL buddies Wiig and Rudolph (I love how her character's parents are Franklin Ajaye and Miss Yvonne) have chemistry for days, including during their one dramatic scene together. Feig's ability to let all six of the female principals--many of whom are, by the way, Groundlings alums--shine comedically makes me eager to see him handle the Ghostbusters reboot that's set to drop in summer 2016. The cameo by Wilson Phillips of "Hold On" fame makes for a good gag about Helen's competitive nature, even though Harold & Kumar Go to White Castle's use of "Hold On" remains funnier.

Oh yeah, and the film is consistently hilarious. You're left wanting more of Annie and the new friends she's made from her duties as maid of honor, but at the same time, you're relieved that Wiig--whose movie canon, as Vanity Fair once said a year before she had her first massive hit with Bridesmaids, has been an acting lesson on how to be funny without being the loudest person in the room--never gave in to greed and rejected the idea of a Bridesmaids sequel. Except for The Great Muppet Caper, National Lampoon's Christmas Vacation, Police Story 3: Supercop, Addams Family Values, 2011's The Muppets, A Very Harold & Kumar 3D Christmas and 22 Jump Street, modern-day (as in post-Star Wars) comedy movie sequels have never been any good, and I get the feeling Wiig is aware of that. "We knew during the first one, this was it," said Wiig to Harper's Bazaar in 2013. A sequel would be as pointless as one of Annie's many blind-dates-gone-bad. 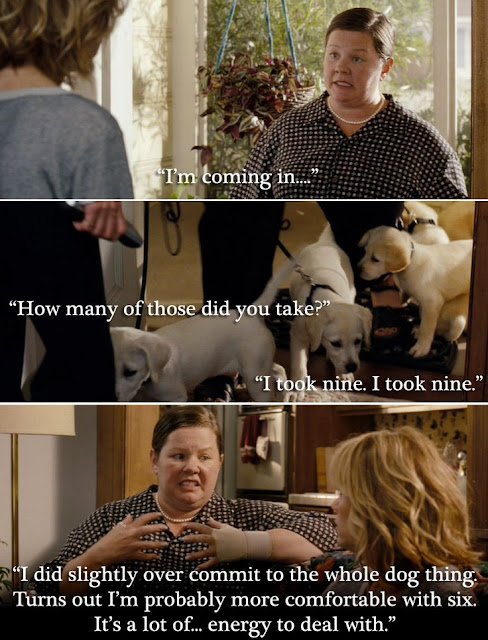