Better than the live-action version, Green Lantern: The Animated Series shines in the music department, and now its score cues are part of "AFOS Prime" 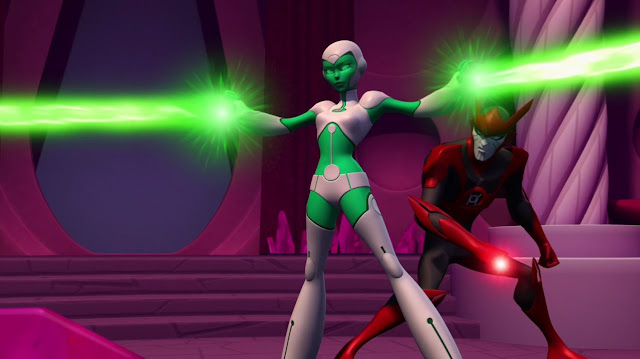 I've recapped Green Lantern: The Animated Series, Batman: The Animated Series producer Bruce Timm's latest series, a few times for "5-Piece Cartoon Dinner" during the series' first season, and though I'm not really a fan of the Green Lantern Corps space cop characters and I had a nice nap when I went to see the live-action version, I've found this Cartoon Network CG series to be surprisingly good. Aya, a heroic, Spock-like female AI who was created by Timm for the series (and is terrifically voiced by Grey DeLisle), is the breakout character on GL:TAS, as well as one of the reasons why the series is more enjoyable than the much-maligned Ryan Reynolds version (that movie was remarkable for somehow being both overstuffed and undernourished at the same time).

I don't own an iPhone because I currently can't afford one and because I don't care for smartphones. Like Greg Proops, I think smartphones are causing society to become douchier (at 39:57 of "Lobsters," Proops astutely likened iPhone addicts to the subjugated citizens in Brave New World as part of his reply to a Smartest Man in the World listener's question about aspects of 20th century dystopian novels that are pertinent to today). But if I did own an iPhone, I'd kick Siri's ass out and have her replaced with the super-reliable Aya. And at least Aya won't try to tell me jokes that are hilarious only to John Malkovich.

Even though I'm neither a machine like Aya nor a reformed alien thug like Razer, I have an easier time relating to Aya's arc of wanting to be taken seriously as a Green Lantern and Razer's shame over his past as a Red Lantern than I did trying to relate to Hal Jordan's hackneyed daddy issues during that inane movie. That's all due to Timm and his crew's knack for intriguing characters (which raises the question "Why doesn't Warner Bros. ever place the scripts of its non-Batman live-action DC films into the more capable hands of either Timm, Alan Burnett, Paul Dini or any of the other talents who have shepherded DC Animation's hit shows and made-for-video movies?"). Another reason why GL:TAS is superior to the Reynolds movie (which, by the way, was directed by Martin Campbell, who recently wiped out the stench of the live-action GL with the excellent pilot he directed for ABC's new action drama Last Resort) is the simple fact that it's animated. Animation, especially CG, is a more suitable medium for the Lanterns and their cartoony-looking powers than live-action, which was where the Lanterns looked unconvincing and inert.

GL:TAS airs on Saturday mornings, which is an unusual time period for an animated cable show's first-run episodes (because most of them tend to air first-run in the evenings), but it's the same time period where earlier Timm projects like The Adventures of Batman & Robin (a retitled, more Robin-centric version of B:TAS) and Superman: The Animated Series first aired back when network TV ran cartoons on Saturdays. Most of the cartoons I used to watch on Saturdays had terrible, colorless and frequently recycled score music, but GL:TAS doesn't. The crappy-sounding electric guitar work and T.J. Hooker drum machines that used to define Saturday morning score music in the '80s and early '90s are nowhere to be found on GL:TAS.

The show's score music, which comes from newcomer Frederik Wiedmann, is original from start to finish in every episode--"recycling" is a dirty word in the Warner Bros. Animation music department--and suitably majestic. There's lots of brass and choir, plus a motif for each major character (for instance, Razer is represented by an electric violin theme), just like how each hero and villain on B:TAS had a motif or instrument that defined him or her musically (I don't think Robin had his own theme on B:TAS though, and I don't remember if he did because I don't really care for that character). Because of Wiedmann's scores, I always feel like I'm watching an epic sci-fi movie whenever I play back an episode of GL:TAS.

As work continues on GL:TAS' second season, La-La Land Records has released 36 of Wiedmann's first-season score cues on the GL:TAS soundtrack album, and I've added my favorite pieces from the album to the "AFOS Prime" and "New Cue Revue" blocks on A Fistful of Soundtracks. Wiedmann's GL:TAS music sounds even better live, as attested by the following footage of a 65-piece orchestra and a 40-piece choir performing a suite of Wiedmann's GL:TAS themes at the PlayFest animation/video game music festival in Úbeda, Spain back in July. At the end of the footage, the man who's pretending to get choked up over the emotional portion of the GL:TAS suite is GL:TAS co-executive producer Giancarlo Volpe: