Every Wednesday in "5-Piece Cartoon Dinner," I dine on five of the week's most noteworthy animated cable shows that are found outside my Adult Swim comfort zone. The episodes are reviewed in the order of when they first aired.

Dipper's rivalry with Robbie for the attentions of Wendy is starting to wear thin on Gravity Falls. I enjoy the show mainly for its comedic take on the paranormal and the title Oregon town's loony and rich backstory and not so much for the love triangle storyline, which surfaces again in "Fight Fighters." There's no way this Disney Channel cartoon is going to romantically pair up a 12-year-old boy with a 15-year-old girl (who looks older than her age, as we saw in that family picture where she towers over her short-statured brothers), so why bother continuing with the triangle?

Despite the triangle stuff, "Fight Fighters" is a hilarious and dead-on parody of '80s and early '90s arcade games like Street Fighter II. In the Gravity Falls universe, Street Fighter II is known as Fight Fighters and is the game from which blond warrior Rumble McSkirmish (Brian Bloom) emerges to go beat up Robbie for Dipper, thanks to a hidden Contra-style code on the side of the Fight Fighters machine that allows Dipper to "Unleash Ultimate Power."

The Gravity Falls target audience might not understand the episode's references to Street Fighter II, Contra, Frogger, Pac-Man and Donkey Kong like those of us who grew up playing either of those games do, but they might get a kick out of the episode's swipe at the much more recent Tron: Legacy when Soos is seen playing Nort: The Game Based on the Movie: Based on the Game (no, that extra colon in the title is not a typo). Like Springfield on The Simpsons, the town of Gravity Falls is a great comedic creation where the games, TV shows and songs that the characters enjoy are all amusingly low-rent variations on the games, shows and songs we dig in real life. So in Nort, instead of light cycles, the players have to settle for racing the villains on much less cooler-looking Segways, and instead of The Wendy Williams Show as summertime afternoon viewing, Mabel is seen watching Why You Ackin' So Cray-Cray? It's not every day you see a Disney Channel show referencing the late '90s Mother Love talk show Forgive or Forget.

After appearing to have been destroyed at the end of The Avengers: Earth's Mightiest Heroes' "Ultron Unlimited" episode, the Vision (Peter Jessop), a synthezoid that turned against his evil creator Ultron, re-emerges in "Emperor Stark" fully repaired after a 30-day sleep programmed by Tony Stark, but he notices there's something a little off about New York City. Maybe it's the strange purple energy beam from the sky that showers over the Stark Industries tower. Or maybe it's all the giant robots in red-and-yellow Iron Man armor that are now policing the unsettlingly empty city streets.

While the Vision slept, Stark launched a prototype satellite that generates and transmits free energy to the world, and then he persuaded the United Nations to install him as its new leader. Stark Industries basically runs this new fascist world, where the elimination of war is the corporation's #1 priority and each Avenger has been assigned the task of policing an entire continent with the assistance of remotely controlled Iron Men. This corporate-run society is like the Occupy movement's worst nightmare. But it's not really Stark's doing. He and the other Avengers have been under the mind control of the Purple Man.

Prince Rogers Nelson took over the world? Nope, this Purple Man has nothing to do with Paisley Park. He's an old Marvel villain I've never heard of before, a purple-skinned master manipulator named Zebediah Killgrave who can command the wills of others and prefers to dress like Steve Harvey instead of Doctor Doom. The purple skin and mind control powers are the result of a chemical refinery accident Killgrave experienced while working as a spy. 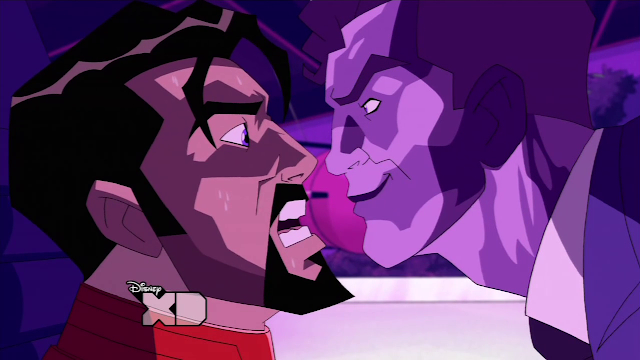 As the voice of the Purple Man, Brent Spiner is more alive here than in his guest shots as the current big bad on Warehouse 13. Writer Christopher Yost gives Spiner a juicy "deep down, you're just like me"-type monologue where his character tries to twist Stark, who's been attempting to separate his mind from Killgrave's control, into thinking this fascist world was his idea all along. "Everything I’ve made you do in the last few weeks, it all came from you," Killgrave says. "I just gave you the push you needed."

I wish Yost did a little more with the changes implemented by Killgrave-controlled Stark, like briefly showing how food is affected by the military-industrial complex or how this new world deals with poverty. Also, the Avenger-vs.-Avenger battle scenes are a device that's becoming overdone on Earth's Mightiest Heroes. However, it results in one of the show's craziest and most memorable visuals: the Vision increases his density to 500 tons to kick an airborne Thor into the earth, the best "a god gets his ass handed to him" scene since, well, that time Loki got repeatedly pounded into the ground like a rag doll by Hulk in the live-action Avengers.

The offbeat character design work of Jhonen Vasquez (a San Jose native!) is the real star of Disney XD's 15-minute cartoon Randy Cunningham: 9th Grade Ninja, which features Parks and Recreation scene-stealer Ben Schwartz as the voice of Randy and officially premieres this week with four consecutive episodes being rolled out daily from Monday to Thursday. Vasquez has come up with some imaginative designs for the Disney/Titmouse show's villains, particularly secretly evil Norrisville businessman Hannibal McFist (John DiMaggio), the stepfather of a bully at Randy's school who wants to defeat this mysterious ninja whom he doesn't know is actually one of his stepson's favorite punching bags. Hannibal has a cybernetic right arm that contains a disembodied brain with often nervous-looking eyes. "Last Stall on the Left," the episode that Disney XD sneak-previewed last month, never explained why this mysterious brain was floating inside Hannibal's arm, so all sorts of scenarios similarly floated around in my head as I wondered about the mystery that led to a brain housed inside some guy's arm. I assumed it was the brain of the mad scientist who built Hannibal's arm and then somehow lost his body. I also thought that maybe the brain was the real mastermind of Hannibal's corporation and Hannibal was the brain's puppet and Dubya-style figurehead.

Then I stumbled into an article that said it's a monkey brain inside Hannibal's arm, which, according to Randy Cunningham creators Jed Elinoff and Scott Thomas, is the show's mute and futuristic version of a pirate's parrot sidekick. I kind of liked it better when I didn't know whose brain it was, although I'm glad Hannibal's choice of a monkey brain for a companion remains unexplained. Villains' quirks are sometimes better off being left unexplained. The lack of a backstory did wonders for the intimidating Heath Ledger version of the Joker in The Dark Knight.

Actually, Hannibal doesn't appear in the week's first two episodes. Instead, the main baddie is the Sorcerer (Tim Curry), an 800-year-old villain who never battles Randy face-to-face because he's chained to a rock beneath the earth. The imprisoned Sorcerer has been using his magic to transform frustrated and angry Norrisville High students into monstrous versions of themselves (Randy refers to his unseen enemy's acts of magic as the "stanking" of his classmates). The mutated teens, who are reminiscent of the "meteor babies" in the first few seasons of Smallville, include a disgruntled marching band reject in "Got Stank?" and a bunch of talent show losers in the singing contest show-inspired "So U Think You U Can Stank?"

Randy Cunningham is Titmouse in kid-friendly mode, which means that while there aren't any raunchy gags for us adult viewers to enjoy like on the studio's Adult Swim shows Metalocalypse and Black Dynamite, it's visually stunning (particularly during the opening titles) and more inventively drawn and animated than most other kids' cartoons. Vasquez wrote that in an earlier concept for the Sorcerer, his favorite Randy Cunningham character to design, he had the villain take control of the teens with Hayao Miyazaki-style black goo, but he thought that would have been too bizarre for a kids' show. I get the feeling that the version of Randy Cunningham that's playing in Vasquez's head is a lot more twisted than the broadcast version. I think I'd enjoy that unrestrained show a little more, but this current show's not too bad.

While sneaking into the Fire Kingdom to retrieve for FP her collection of scented candles to eradicate the stench of their farts and burps, Finn and Jake, protected by blue "Flame Shields" cast on them by Flambo (Tom Kenny), both stumble upon a plot to assassinate the Flame King at a Shakespeare play he'll be watching. The duo attempts to communicate to the king that he's in danger by infiltrating the production as theater troupe members, but along the way, they nearly get caught by guards during the episode's funniest sight gag, in which Jake disguises himself and Finn as a painting on the wall. I love how Finn's lip quivers while he tries his damnedest to stand still in front of the guards.

Other than the fake painting scene (which is also when the snail that makes a cameo appearance in every episode turns up), "Ignition Point" isn't all that memorable, although hearing David utter dialogue written in that unmistakable, pothead-esque Adventure Time style like "Man, I am so lost" in response to Finn and Jake's badly ad-libbed portion of the play is never not amusing.

King of the Hill veteran Stephen Root is nearly unrecognizable as the voice of Mildew--Berk's version of the old man on the block who yells at kids and empty chairs to get off his lawn--during Dragons: Riders of Berk's "In Dragons We Trust" episode. Mildew has hated the dragons ever since the Vikings accepted them into the village, so he's been framing the beasts for acts of robbery and vandalism to cause Hiccup's father Stoick to banish them from the island, as we learn when Hiccup investigates Mildew's hut to confirm his suspicions about him.

Hiccup discovers that the dragon footsteps that incriminated Toothless and the other creatures and sent them into exile were left by fake dragon claws Mildew's been using to set them up. The kid watches in shock as Mildew tosses into the ocean all the evidence that would incriminate him during the episode's tense cliffhanger ending, one of many scenes without dialogue that this show does so well.

Speaking of the absence of dialogue, how much more awesome would Star Wars have been without dialogue? George Lucas originally wanted the three prequels to be silent movies. Goddamn, those prequels would have been so much better that way, and stunning footage from an unfinished anime-style Star Wars fan film by animator Paul Michael Johnson, which went viral earlier this week, proves it.