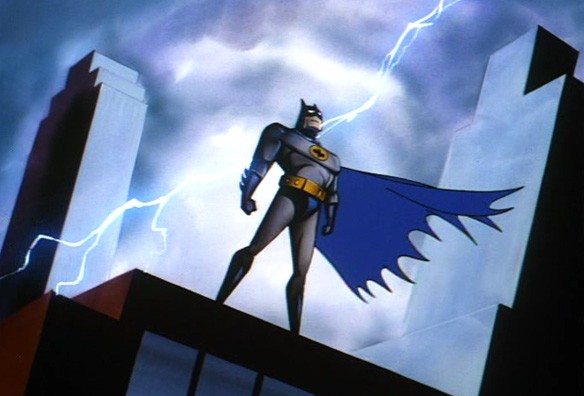 I got so busy producing a weekly vlog that nobody watches and has become a little less fun to work on that I almost forgot that 20 years ago this week, Batman: The Animated Series debuted on Fox on September 5, 1992 with an episode about Catwoman ("The Cat and the Claw, Part I") to whet the appetites of viewers who had seen Batman tussle with a much kinkier version of Selina Kyle in Tim Burton's controversial Batman Returns over the summer.

The B:TAS crew was more subtle and clever than Burton about sneaking adult content into their version of Batman. Without attracting the attention of parents' groups and conservatives--the wet blankets of America--like Burton did in Batman Returns, the B:TAS crew got away with sneaking in elements like a giant vagina attacking Batman, which producer Bruce Timm claimed was unintentional, and a lesbian couple: Harley Quinn and Poison Ivy (maybe B:TAS got away with so much also because it was kind of under-the-radar compared to Burton's movies, which were exposed to a larger international audience).

B:TAS is a show I dug so much as a high-schooler and is one of the few shows I tried to collect DVD box sets of (and never finished doing so) back when I was employed, I could afford to buy DVD box sets and people actually bought DVDs. Because of its 20th anniversary, A Fistful of Soundtracks' "AFOS Prime" and "New Cue Revue" blocks will begin streaming several selections from La-La Land Records' recent second volume of B:TAS' well-crafted score cues next week.

I think I've spoken enough about the original music on the show ("Batman: The Animated Series soundtrack: A Walker to remember" from December 2008 and "A little Knight music: The second Batman: The Animated Series soundtrack from La-La Land is even better than the first" from a couple of months ago), so I want to say a few words about the show itself. Both B:TAS and another animated Fox show, The Simpsons, ignited my love for smartly written animation and made me want to write for animation or comics someday. On-screen, Doctor Who star David Tennant once memorably told '80s Doctor Who star Peter Davison--both in character and as a fan of the Davison era of the show--that "You were my Doctor." In a similar fashion, a certain generation of viewers considers Adam West to be their Batman. Though West was a great comedic Batman, Kevin Conroy's take on the Dark Knight remains my favorite on-screen incarnation of the character.

And as us admirers of B:TAS celebrate the show's 20th anniversary, we're not just celebrating two decades of terrific animated TV by the likes of Timm, Eric Radomski, Alan Burnett and Paul Dini and staffers who passed on after the show's run like composers Shirley Walker (whose B:TAS work Bear McCreary frequently cites as a major influence on his TV scoring career) and Harvey R. Cohen and director Boyd Kirkland. We're also celebrating two decades of Conroy's voice work as Batman. I never expected the Julliard-trained Conroy to continue to voice Batman about a decade and a half after B:TAS stopped production, but there he still is, pretending to rough up motherfuckers as the Dark Knight in DC Animated Universe feature films and video games.

Though West underplayed his Batman quite well, and Michael Keaton managed to bring an interesting stamp to both the Bruce Wayne and Batman halves of the character despite the massive constraints of his difficult-to-walk-around-and-act-in costume, Conroy, who was far from a comics fan, outdid both West and Keaton by rethinking how the character spoke on-screen.

"As soon as [the producers] described his schizophrenic lifestyle, it bugged me," recalled Conroy to Esquire recently. "I thought, Wait a minute, he is the Bill Gates of Gotham. He is the most eligible bachelor. Everyone knows who he is. And he puts on a cape, and no one recognizes him? Come on."

Conroy, one of 75 actors who auditioned for the part, decided to give Batman two slightly different voices, "fundamentally altering the legacy of a comic book he had only passing knowledge of," as Ali Taylor Lange wrote in the Esquire piece on Conroy. As Batman, Conroy opted for raspy, mysterious and dashing--because of that badass voice, guys like me wanted to be like him, while many of the show's female viewers ended up wanting to do him--while in businessman/philanthropist mode as Bruce, he came up with a more relaxed voice, but without sounding too foppish or cartoony.

There's more to that dual-voiced reading than raspy-vs.-relaxed though. The psychological homework that Conroy did to distinguish his take on the character was as well-thought-out as all the other aspects of B:TAS that elevated it from standard Saturday morning superhero fare to an unconventional and sophisticated superhero cartoon that appealed to adults.

"If he sounds that different, where does the voice come from? It has to come from the pain," said Conroy to Esquire. "I decided that the Bruce Wayne persona, the public persona, is the performance, and the Batman character is who he is when he is most natural. When he's putting on the cape, he is becoming himself."

Conroy veered away from that dual-voiced approach when he reprised his role for The New Batman Adventures, Batman Beyond and the Justice League franchise and in several animated movies, but his post-B:TAS voice work as Batman is still far more nuanced than Christian Bale's frequently parodied Muppet-like voice for Bruce in the Batsuit, which Conroy has a few not-so-positive opinions about.

"It's too jarring. I wish that someone had given him a little feedback early on," complained Conroy to Esquire. "It doesn't sound organic. It sounds imposed. I think the whole trick to the Batman voice is that is [sic] has to be his own voice, and the Bruce Wayne voice is the imposed one."

Christopher Nolan's three Batman movies with Bale are above-average live-action adaptations of comic-book material, but to me, B:TAS is the definitive on-screen version of Bats. (Sure, there are occasional affecting moments in Nolan's trilogy like Gary Oldman's Jim Gordon quietly choking up in the precinct while comforting a young Bruce after his parents' murder in Batman Begins or the climactic callback to that precinct scene in The Dark Knight Rises. But they don't move me as much as Bruce's subdued recollection to Dick Grayson about losing his parents does in "Robin's Reckoning, Part I." And it's a frigging cartoon!) Despite quite a few clunkers like the overly kid-friendly "I've Got Batman in My Basement" or any early episode where, as director Frank Paur recalled to Cinefantastique in 1993, "We had these little public service announcements worked into the scripts, a concept we nixed real quick," B:TAS' high quality proves that animation is a better and more natural-looking medium than live-action for adapting certain comics like the Bat-titles. 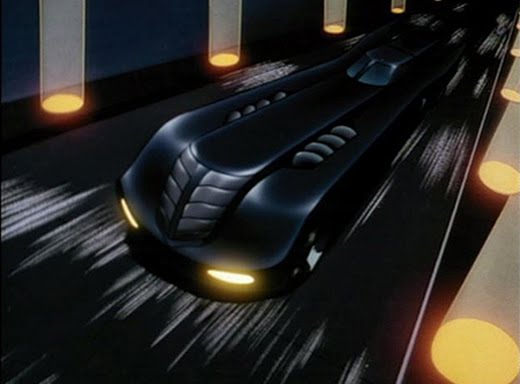 Also, the weekday TV series format--as opposed to a two-hour one where not as much time can be spent on character development--resulted in villains who were more than two-dimensional heavies spouting hackneyed evil dialogue. Several of Bats' adversaries on B:TAS were regular, often misunderstood human beings, like how criminals would often be written on The Rockford Files, Keen Eddie and the Elmore Leonard adaptations Karen Sisco and Justified. Even Harley, the most popular character who originated from B:TAS, had depth to her, despite her dumb-blonde dialogue.

"What gets me the most, though, and still does, is the writing," noted Dan Seitz in his post about B:TAS for Gamma Squad earlier today. "It was, essentially, noir to its bones: A man loses his company because he takes a coffee break ('The Clock King'); A woman suffering from a disease can't move on with her life and tries to go back to the way things were ('Baby-Doll')..."

Speaking of noir, digital advances have led to the animation on subsequent animated Batman shows being more consistent in quality than the animation on B:TAS, but I miss the pre-CG-era dirt and grime that always turned up on the Fox show's cels. The animators who worked on B:TAS may not think much of the visible flecks of dirt, but I always thought they helped enhance the noirness of the show.

Has there ever been a cartoon as genuinely noirish as B:TAS before its premiere two decades ago? I doubt it. As Seitz writes, the complexity of the adversaries on B:TAS is "Heavy stuff for a show aimed at kids, but it's what makes the show a classic and still airing on cable."

It's also why we're still talking about B:TAS and streaming score cues from it 20 years later.
Posted by J. John Aquino at 9:50 PM