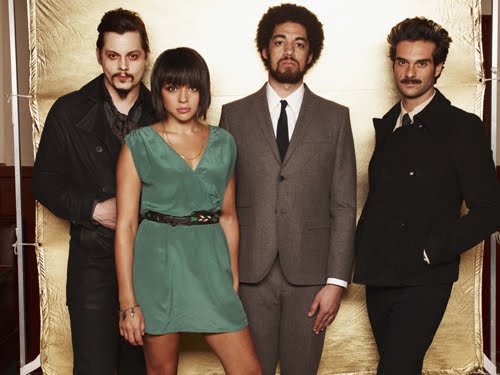 I first read about Rome, Gnarls Barkley and Broken Bells producer Danger Mouse's homage to '60s and '70s Italian film scores, back in November and couldn't wait to hear the results of the project. Rome has Danger Mouse collaborating on new material with Italian composer Daniele Luppi (whose 2004 album An Italian Story is a nifty homage to the '60s Italian sound that's similar to Rome), as well as several of the veteran musicians who performed on many of those terrific '60s and '70s scores.

"It was really the dream to reunite the Cantori Moderni 40 years later. It was a choir put together by Alessandro Alessandroni--think about the Sergio Leone movies, the Morricone soundtracks with those beautiful soprano melodies," said Luppi to the Guardian. "Alessandroni was not only the choirmaster, but his whistle is all over those movies."

The concept album, which finds Danger Mouse and Luppi paying tribute to not just Morricone, but also to the likes of Piero Umiliani, Bruno Nicolai and Piero Piccioni, took about five years to make and will finally drop on May 17. Parlophone Records recently posted a lengthy trailer featuring interviews with Danger Mouse, Luppi and lead Rome singers Jack White and Norah Jones.

Judging from White's Sergio Corbucci-esque, spaghetti western imagery-filled "Two Against One" and the lush and loungy Jones/Cantori Moderni tune "Black," which were also posted by Parlophone and will debut together as a 7-inch vinyl single on Record Store Day on April 16, Rome sounds promising and is far from kitschy or overly cutesy like many homages to the '60s Italian sound have been.

I would love to stream some of the tracks from Rome on my station, but because AFOS focuses only on original score material or existing songs featured in film and TV, I can't find an appropriate block for the Rome tracks. I'll think of something.

Speaking of Danger Mouse (whose love for '60s and '70s Italian scores first emerged in 2004 when he sampled the Viva Django score in the Gnarls hit "Crazy"), here's one of my favorite Danger Mouse-produced joints from last year, amusingly mashed up with a fixture of early '80s MTV: