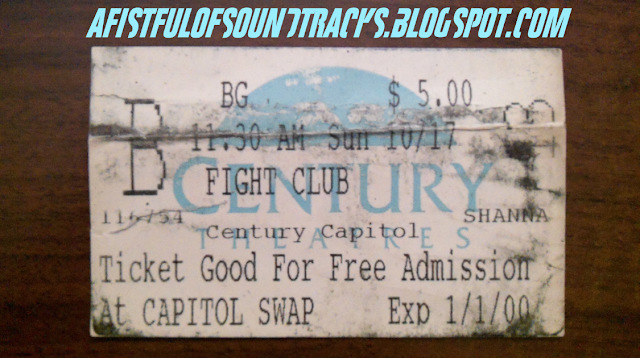 Cell phones have ruined movies forever. They've made it more difficult for screenwriters to come up with suspenseful situations. You couldn't write either Rear Window or North by Northwest today because every moment of suspense would become impossible for the nitpickers in the audience to take seriously due to "Hmm, you know he or she could use his or her smartphone to save his or her own ass in this situation." The constant advances in cell phone technology have even affected movies that have aged pretty well--when they don't involve phone scenes, that is. The appearance of any kind of phone in a largely timeless movie that's not a present-day cell phone immediately makes that otherwise timeless movie dated.

Thanks to the cutting-edge work of cinematographer Jeff Cronenweth and director David Fincher, whose visuals have always been cutting-edge and distinctive (whether in Fincher-directed music videos like Aerosmith's "Janie's Got a Gun" video or more recent Fincher films like the Cronenweth-lensed Gone Girl), the 1999 anti-consumerism cult favorite Fight Club looks like it could have been filmed yesterday, and it stands the test of time--for several minutes. But then Edward Norton is seen standing in a pay phone booth to dial up his new soap salesman friend Tyler Durden (Brad Pitt), and Fight Club instantly becomes dated.

I had not watched Fight Club in 16 years, before rewatching it as prep for today's edition of Throwback Thursday. In addition to containing the only film score by the Dust Brothers of Paul's Boutique fame (who really ought to compose more scores, due to their outstanding work on the 1999 film, which can be heard during either "AFOS Prime" or the first 33 seconds of the trailer below), Fight Club remains my favorite Fincher film. It's still my favorite even when the appearance of a pay phone wrecks the timelessness and anonymity both Fincher and the various adapters of Chuck Palahniuk's thought-to-have-been-unfilmable 1996 novel of the same name, including credited screenwriter Jim Uhls and uncredited Andrew Kevin Walker from Seven, tried to aim for in their portrayal of modern-day malaise (the city Fight Club takes place in is unspecified, despite the frequent use of L.A. locations, as is the name of Norton's narrator character, although the shooting script referred to him as Jack--we'll call him Jack from this point on).

Much of the appeal of Fight Club stems from the fact that we've all experienced Jack's feelings of malaise (he's nameless for a reason: so that male audience members can name the narrator after themselves). Okay, so you may not be a privileged white male yuppie like Jack, but you can definitely relate to his dissatisfaction with his job as an auto recall specialist and the feeling of emptiness that triggers his insomnia and has him doing anything to feel alive, whether it's going through an IKEA shopping phase, faking diseases and crashing support group meetings with his frenemy Marla Singer (Helena Bonham Carter) or forming with Tyler an underground fight club to blow off steam, for men only (no Marlas allowed).

A good example of the film's ability to connect with viewers long after it tanked at the box office (Palahniuk's material isn't unfilmable--it's unmarketable, as 20th Century Fox realized while inanely trying to sell Fight Club as a TBS Movie for Guys Who Like Movies back in 1999) was when former RogerEbert.com editor Jim Emerson interestingly called Fight Club one of the most accurate depictions of clinical depression ever made and praised how it captures the way that depression is all-consuming. "It helped shake me out of the grips of a depression that was sucking me down at the time," wrote Emerson.

Fight Club is also one of the cleverest satires about the formation of cults--the creepy kind, not the more harmless midnight-movie kind that enjoys Fight Club--and how they sucker people in (someone ought to put Fight Club on a double bill with Going Clear). In a twist as great as the revelation that Tyler is really Jack's imaginary friend and the voice in his head, the fight club, which grows to nationwide proportions, evolves into a terrorist cult called Project Mayhem and takes extreme measures to address what were valid gripes about consumerism. Like Putney Swope, Fight Club explores how, as Nelson Kim wrote while discussing in Hammer to Nail why Putney Swope is still relevant, "people will be cruel and craven no matter what side of the power dynamic they occupy."


Fincher's film isn't an endorsement of fascism. It's a humorous critique of both that and masculinity when it gets taken to absurd and homoerotic-looking extremes, something that the Rosie O'Donnells and Kenneth Turans of the world failed to grasp (part of what makes Norton's Fight Club audio commentary with Pitt and Fincher enjoyable is the hatred Norton frequently expresses for Turan and his "obsolescence"). O'Donnell hated Fight Club so much that she spoiled its twist ending on her 1996-2002 talk show, the third most despicable thing she's done on TV, right below her lame "ching chong" bit on The View and any time she tries to sing. It's not surprising why O'Donnell disliked Fight Club: both she and her talk show/daily one-hour commercial for Koosh Balls were extremely corporate, and in addition to fascism, the film critiques what Emerson described as an "insidious kind of corporate enterprise--the kind that markets itself as your best friend and uses cutesy branding images to get under your skin and into your wallet." Sounds an awful lot like O'Donnell.

Fight Club--a film that wowed Palahniuk so much he considers it superior to his own original version (its cult popularity has led Palahniuk to team up with both Batgirl revamp artist extraordinaire Cameron Stewart and Dark Horse Comics on a Fight Club sequel in graphic novel form)--is a strong example of the inventiveness that distinguished 1999, perhaps the most extraordinary year of filmmaking ever. It's a year that included Election, Office Space, The Iron Giant, South Park: Bigger, Longer & Uncut, the better-than-the-original Thomas Crown Affair remake, The Limey, Ghost Dog: The Way of the Samurai, Being John Malkovich, Galaxy Quest and Johnnie To's Hong Kong action classic The Mission, all films that didn't make as much moolah as The Matrix did in the same year but are equally (and in some cases, even more) enduring and inventive. Sure, American Beauty, which, like Fight Club, sends up both materialism and the immature posturing of its anti-materialist protagonist, also came out of 1999 and became an award-show darling, and sure, Kevin Spacey was great in it, but have you taken a look at that film lately? It hasn't aged as well as Fight Club has.

Try not to snicker during Wes Bentley's frequently parodied, corny and oh-so-serious monologue about the beauty of a dancing plastic bag. You can't. "Sometimes there's so much beauty in the world, I feel like I can't take it, and my heart is just going to cave in" vs. "I felt like destroying something beautiful"? Oh, I think we all know which movie wins this round.

Those weird hip muscles that Brad Pitt has in Fight Club that point to his dick? Just made peace w fact that I'll never have 'em. Big day.
— Kumail Nanjiani (@kumailn) March 1, 2012