"Far East style with the spirit of Wild West": Familiarize yourself with the music of Samurai Champloo co-composer Nujabes 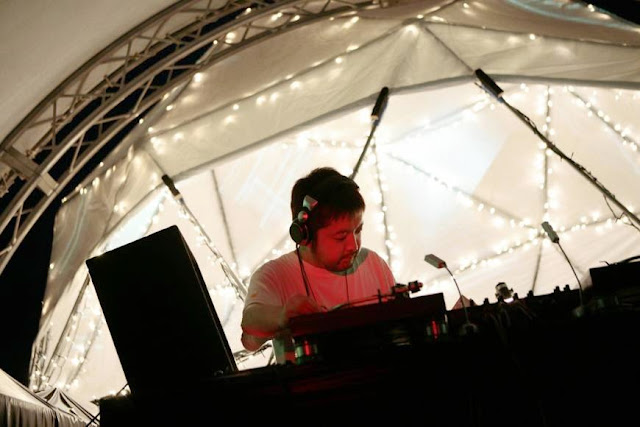 Like I've said before, I love it when the worlds of film or TV score music and hip-hop collide. One of my favorite of those collisions is the work of the late Japanese producer Nujabes (pronounced "noo-jah-bess") as a co-composer for Shinichiro Watanabe's classic 2004-05 animated show Samurai Champloo, an intentionally anachronistic period piece full of samurai who display breakdancing fighting styles and Edo-period Japanese youth who are fond of either beatboxing or creating graffiti art.

Just like J Dilla, another beloved and distinctive producer whose death in the late '00s is still being mourned by many in the hip-hop community, Jun Seba (Nujabes is an anagram of his name), the virtuoso beatmaker and founder of his own indie label Hydeout Productions, has gained more fans posthumously than before his death from a car accident in 2009, mostly due to Samurai Champloo. Nujabes' instrumentals were pitch-perfect for Champloo (by the way, "champloo," if you've ever wondered, is the Westernized spelling of "chanpuru," a word that means "something mixed" and is also the name of an Okinawan stir-fry dish that mixes tofu with meat and bitter melon or other ingredients). The music by Nujabes, Fat Jon, Tsutchie and Force of Nature (the duo of DJ Kent and KZA) alternated between playful and contemplative, like the show itself, which alternated between raucous action comedy and the existential drama that was found in the tortured pasts of its three principal characters: unemployed rival swordsmen Mugen and Jin and their teenage charge Fuu, a mismatched trio in the mold of Watanabe's Cowboy Bebop trio of Spike, Jet and Faye.

(The cues during FUNimation's clip from "Tempestuous Temperaments," Champloo's first episode, are "Loading Zone" and "Silver Children," both by Force of Nature.)

"Plangent piano lines dominated, sometimes ornamented by flute or soprano saxophone, with a mood that hovered between melancholy and uplifting without ever tipping over into schmaltz," wrote James Hadfield about the Nujabes sound in his recent Japan Times piece about both Nujabes and frequent collaborators like Japanese rapper Shing02, whose bars grace Champloo's Nujabes-produced opening title theme "Battlecry" ("Some fight, some bleed/Sunup to sundown/The sons of a battlecry"). My favorite part of the Japan Times piece on Nujabes has to be the vivid glimpse into Nujabes' time as a persnickety, Rob Gordon-esque record shop owner in '90s Shibuya: "Sometimes the owner's personal tastes trumped commercial considerations: When Jay-Z released crossover hit 'Hard Knock Life (Ghetto Anthem)' in 1998, Seba only stocked a few copies because he didn't like the song."

Nujabes' schmaltz-free and Annie-free contributions to Champloo can be heard during the AFOS blocks "Beat Box," "Brokedown Merry Go-Round" and "AFOS Prime," as well as during a terrifically assembled mix of Nujabes instrumentals by L.A.'s Daddy Kev, which he dropped in honor of Nujabes, on the fifth anniversary of his death on February 26. The new mix contains the Champloo instrumentals "A Space in Air" (starting at 0:00), "Haiku" (at 7:51), "The Space Between Two World" (at 13:58), "Aruarian Dance" (at 21:18 and my personal all-time favorite Nujabes beat) and "Mystline" (at 50:32).

Champloo's entire run can be streamed on either FUNimation, its YouTube channel or Netflix, where you can glimpse how the music of Nujabes, Fat Jon, Tsutchie and Force of Nature is so integral to Champloo that it's like a fourth character on the show (a 2012 essay on Champloo by the hip-hop site The Find notes that the rise in Nujabes' international popularity is "partially because of careless teenagers on YouTube incorrectly crediting him with just about every track on the show, while the most often featured musician on the show and most responsible for the overall musical texture, Tsutchie, would end up criminally ignored"). But if you've never watched Champloo and you're unfamiliar with Nujabes' music, Daddy Kev's "Beyond" tribute mix is an ideal introduction to his music.

My first encounter with the Nujabes sound was a bizarre one: it wasn't through Champloo but through a remix of Amerie's "1 Thing," which made the rounds of the blogosphere back in 2005 for brilliantly mashing up "1 Thing" with Nujabes. The remix was the work of an L.A. remixer and DJ named Siik, whose bizarrely named mixes are among my favorites. Siik's "I Don't Even Like Coffee" receives frequent MacBook airplay from me, simply for the inclusion of the underrated, Dilla-produced A Tribe Called Quest track "Like It Like That."

It wasn't until nearly a decade after the "1 Thing" remix--while watching all of Champloo for the first time, in subtitled form and online, and then becoming such a Nujabes fan that my older brother got me a Hydeout compilation last Christmas--when I realized the instrumental Siik chose for his "1 Thing" remix, "Aruarian Dance," came from Champloo. That made me like Siik's remix even more. And now, since it's such a great sampler of Nujabes instrumentals, Daddy Kev's "Beyond" tribute mix joins the likes of the "1 Thing" remix and "I Don't Even Like Coffee" as something I'll frequently vibe to on my MacBook, sunup to sundown.
Posted by J. John Aquino at 11:15 AM