"Let's go get some barbecue and get busy," a.k.a. the best Fresh Prince episode ever 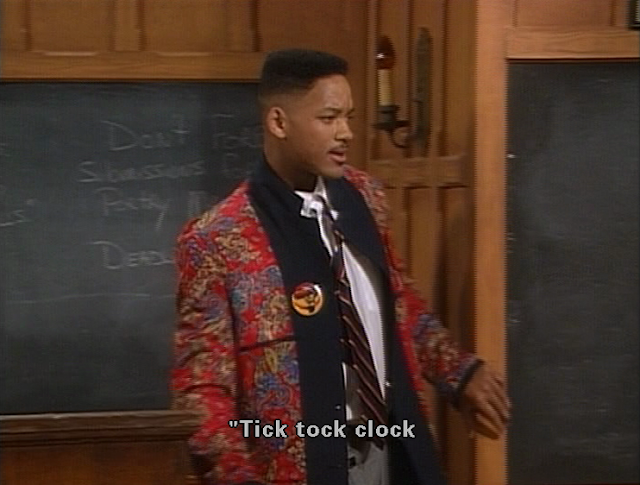 I've been sent music journalist Brian Coleman's second Check the Technique book to review for Word Is Bond, and the new volume, part of Coleman's series of books of exhaustive interviews with rappers and beatmakers about classic albums they recorded, contains behind-the-scenes stories I've always wanted to read about Black Sheep's A Wolf in Sheep's Clothing and Raekwon's Only Built 4 Cuban Linx... One chapter I didn't expect to enjoy was the chapter about DJ Jazzy Jeff and the Fresh Prince's rise from a sensation in Philly to national chart-toppers, thanks to 1988's He's the DJ, I'm the Rapper, the first double album in hip-hop history.

The chapter notes that He's the DJ, I'm the Rapper's double-LP format stemmed from the duo's original conception of the project as a scratch album to showcase Jazzy Jeff's turntablist skills. In the late '80s, a scratch album was unheard of, but today, they're a commonplace thing in hip-hop. For example, DJ Qbert recently dropped simultaneously on iTunes a scratch album and a more accessible-sounding album loaded with guest features by rappers, and those two recent Qbert releases were sort of like if He's the DJ, I'm the Rapper got split into two separate albums instead of being the mammoth two-headed beast we know of today. 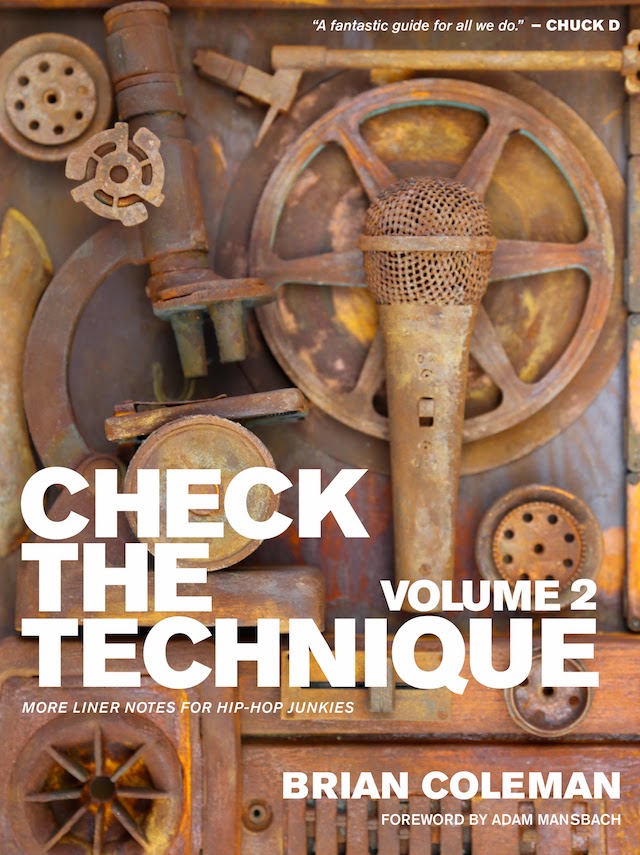 That story of He's the DJ, I'm the Rapper's evolution from a DJ-only album to a showcase for both the skills of Jazzy Jeff the beatmaker and Will Smith the storyteller is an interesting read. So are the recollections of the trouble the duo got into with New Line Cinema over "A Nightmare on My Street," their proto-horrorcore track about the '80s and '90s New Line cash cow Freddy Krueger, and Jazzy Jeff's tidbit about him and Smith turning down the script for House Party (Coleman was unable to interview Smith, presumably because Smith's too busy being one of the biggest movie stars in the world).

He's the DJ, I'm the Rapper is best known for introducing the massive 1988 hit "Parents Just Don't Understand" (which isn't my favorite track on the album; that would be the Bob James-sampling "Here We Go Again"). The album doesn't contain the duo's much more frequently quoted theme from The Fresh Prince of Bel-Air because, of course, the hit sitcom--which based its "inner-city kid in a mansion" premise on pop music industry bigwig Benny Medina's life as an extra member of the household of his mentor Berry Gordy--didn't exist yet, and its premiere on NBC was only two years away. However, I do know of one place that contains the Fresh Prince of Bel-Air theme--in its rarely heard entirety--and that would be "The Whitest Block Ever" on AFOS, every weekday at 10am Pacific.

The show never got much shine from TV critics when it first aired, and it still doesn't--today's critics remain more taken with Seinfeld, Friends and Roseanne as '90s live-action sitcoms. Sure, The Fresh Prince's storylines weren't exactly groundbreaking and formula-defying like Seinfeld's, and Roseanne did a better job at seriousness--when The Fresh Prince tried to get serious with an occasional Very Special Episode, the results would often be preachy and only occasionally effective and genuinely wrenching--but I find myself rewatching The Fresh Prince more often than Seinfeld. Okay, it kind of went off the rails after Hubert was fired and the producers pulled a Darrin on us with a new Aunt Viv, but otherwise, The Fresh Prince is a funnier show than Seinfeld. There, somebody had to say it.

I'll always admire Seinfeld for its disregard for Full House hugs and other equally cuddly Miller-Boyett clichés, as well as finally giving Julia Louis-Dreyfus--who, before Seinfeld, had a less-than-great stint on SNL and was the highlight of Fresh Prince co-creator Andy Borowitz's otherwise bland day care sitcom Day by Day--a shitload of material that was worthy of her comedic talents (Elaine's my favorite Seinfeld character who isn't Bookman the library cop; Bookman is, of course, the greatest character Seinfeld came up with). But Seinfeld is also a very white show with several unfunny and stereotypical moments involving characters of color (and I'm getting less enamored with the show when its star/co-creator, who really should have kept his mouth shut when he was recently asked about the subject of the push for more diversity in comedy, instead chose to respond to the subject with "Who cares?"). The Fresh Prince doesn't have that race problem. Seinfeld would never have done an episode like "Def Poet's Society," where white privilege gets mocked instead of celebrated and reinforced. That brief mockery of white privilege and, of course, the frequently quoted moments of both classic and not-so-classic poetry are why "Def Poet's Society," which was written during the show's first season by John Bowman (a white veteran of SNL and In Living Color who later co-created Martin), remains my favorite Fresh Prince episode, as well as one of my favorite episodes of any '90s sitcom.

Like I said before, The Fresh Prince's storylines weren't exactly original. The "making up a fake poet or musician in order to get into a girl's pants" storyline is as old as "locked in the bank vault with Mr. Mooney." But what "Def Poet's Society" does with it is hysterical. There's the very name of Will's fake street poet Raphael De La Ghetto, network TV's first and only gag about the odd-sounding band name of De La Soul, as well as the inspiration for an Asian American YouTube star to dub himself Timothy DeLaGhetto.

There's the sight of Jazzy Jeff, who, like Smith, had no previous sitcom acting experience but wasn't exactly as charismatic as Smith, taking his lack of range and--just like in all his other appearances on the show--somehow building out of that lack of range a genuinely funny take on the sitcom staple of the lazy and weird best friend character. What about Buddy from Charles in Charge? Nah, Jazz was funnier. 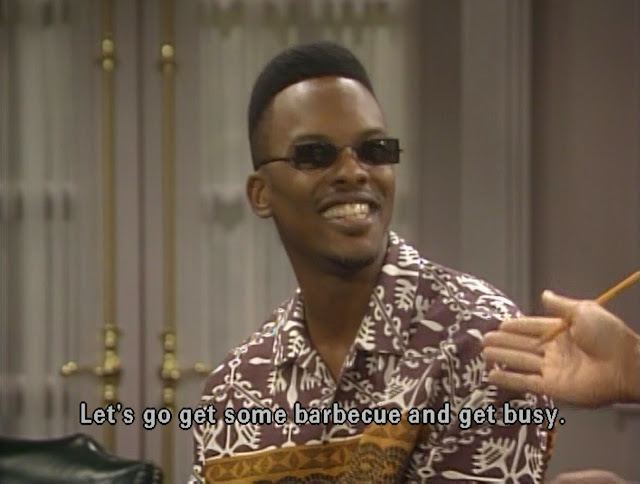 There's British actor Joseph Marcell's lousy impression of an African American street poet when Will talks Geoffrey the butler into donning an Afro and a dashiki to bring to life the reclusive Raphael De La Ghetto (a name that's so great I have to say it in full every time). My favorite part of Marcell's scenes as Raphael De La Ghetto--other than "Cannon to the right of them, cannon to the left of them!"--is a moment that goes unnoticed by the studio audience, and it's when he's unable to keep his fake American accent from slipping when he says "Mask your fears."

Finally, there's Smith himself, no longer nervously mouthing the lines of his co-stars like he did in the Fresh Prince pilot (at the end of the poetry club night scene, he's mouthing Jazz's poem, but that's part of the episode's script this time). He's already the confident and charismatic lead who would continue to help anchor, along with the late, great James Avery as Uncle Phil, The Fresh Prince for five more seasons.

But in recent years, the funniest part of "Def Poet's Society" for me has ended up being neither Jazz nor Geoffrey nor Will. It's any time that Mr. Fellows (Jonathan Emerson), Will and Carlton's English teacher, claims he knows the work of Raphael De La Ghetto or makes that hilarious post-poetry-reading O-face over what he thinks is the brilliance of Raphael De La Ghetto's prose. Mr. Fellows is every single culture vulture I ran into at UC Santa Cruz. He's every white person in the audience who stupidly applauded both Warren Beatty's shitty rapping and Amiri Baraka's cringeworthy line "You got to be a spirit!" back when I saw Beatty's white savior film Bulworth in Santa Cruz in 1998. He's also every single douche in Williamsburg or Silver Lake who claims he was into this band or that band before everybody else. 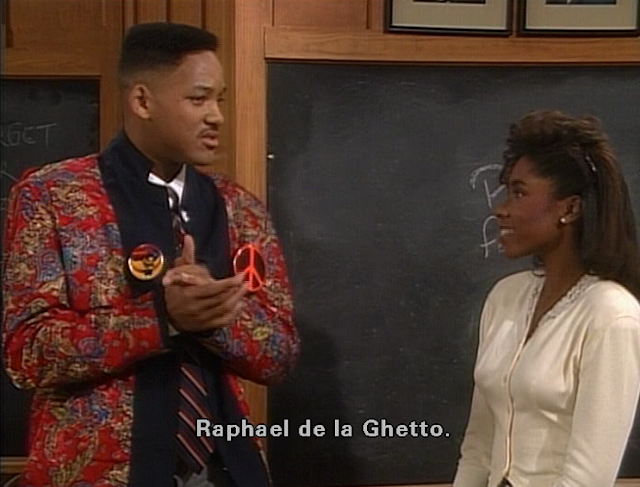 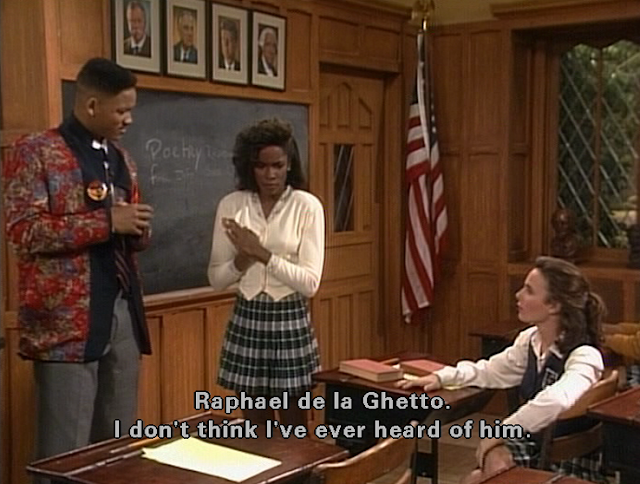 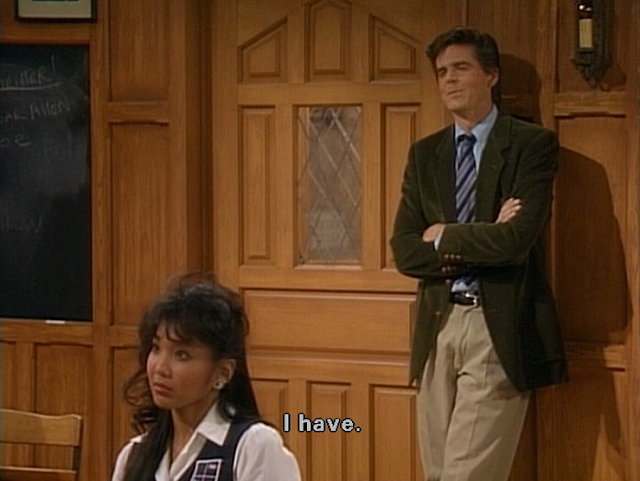 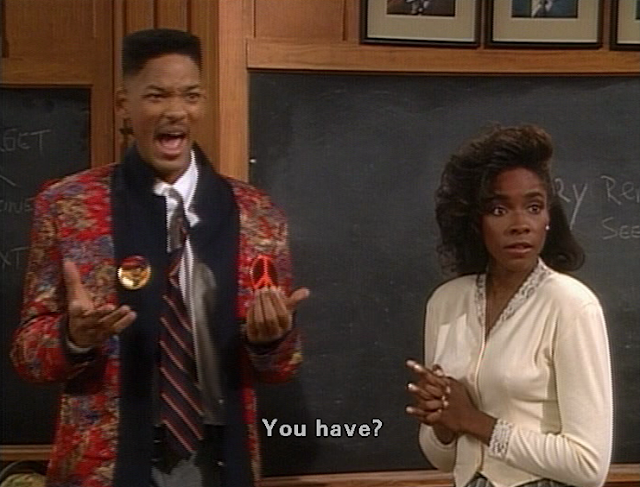 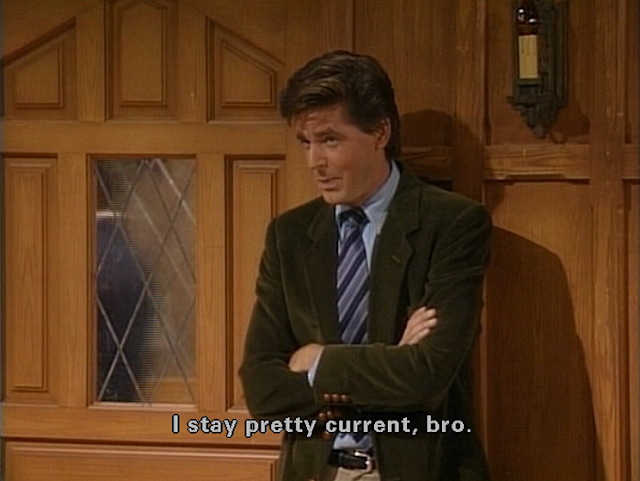 Like when Tajai from Souls of Mischief tweeted that "Eventually #Hipsters bathe, shave and become the 'out' republicans they are," eerily about a year before the Republican Party's hipster ad, leave it to hip-hop to speak the truth about the fraudulences of hipsters. In the case of The Fresh Prince's classic "Def Poet's Society" episode, it did so long before the present-day form of hipsters existed. Now that's worthy of an exhaustive oral history.
Posted by J. John Aquino at 2:45 PM