Why Grimm's recent glimpse into Sgt. Wu's Filipino heritage is a big deal, especially during both Filipino Heritage Month and Halloween


There's a great line early on in last weekend's Black Dynamite season premiere, where the titular '70s kung fu fighter tells his sidekicks he refuses to join them in observing the first official Black History Month ever because he "ain't celebrating his blackness on any month that the white man tells him to." Black Dynamite has a point there about history months for people of color.

Even though it's cool to have a Filipino American Heritage Month, it's also kind of silly in concept because I don't celebrate my Filipino heritage only in October--I celebrate it on the regular. I wish I could be like Black Dynamite and tell the white man that he'll never be the boss of me or my heritage. But Yakoo chose to place Filipino Heritage Month on the same month as Halloween, which is actually kind of badass. On second thought, sorry, Black Dynamite. When the haoles give us October, I can't get mad at that.

Every Halloween, or as I like to call it these days, Racists' Coming Out Day--or as Hari Kondabolu calls it, "Racist Christmas"--AFOS celebrates the holiday with "Buckets of Score," a six-hour block of original score cues from horror flicks, thrillers and supernatural procedurals, starting at 5pm Pacific. "Buckets of Score" will include highlights of Six Feet Under composer Richard Marvin's score music from the first two seasons of the Portland-based supernatural procedural Grimm, which will continue to keep Portland weird with the arrival of its fourth season this Friday on NBC.

I went from mildly liking Grimm, a show where the cast members' behind-the-scenes tweets are sometimes as entertaining as the show itself, to straight-up loving it, ever since the March airing of "Mommy Dearest." That's the episode from last season where Sgt. Wu--a reliable source of Detective Munch-style gallows humor and a colleague of the show's titular hunter of monstrous menaces, Portland cop Nick Burkhardt (David Giuntoli)--was revealed to be Pinoy, just like the actor who portrays him, Reggie Lee (I had no idea Lee was Filipino until the press coverage for "Mommy Dearest" because the surname Lee doesn't exactly scream out Filipino). 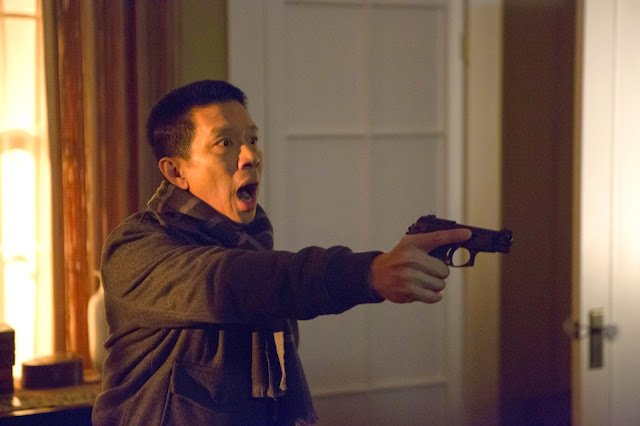 Grimm's third season is the first season where I started to watch Grimm regularly on Hulu, after a lady at an after-party for v3con in L.A. recommended to me that I check out more of Grimm. I only caught a few Grimm episodes before season 3: the pilot; an episode featuring serial guest star Jaime Ray Newman as the Blutbad (a.k.a. wolf-y) ex-girlfriend of Monroe (Silas Weir Mitchell), Nick's Blutbad guide into the complicated and multifaceted world of Wesen (pronounced "veh-sen") creatures; and the arc that introduced Mary Elizabeth Mastrantonio as Nick's elusive and badass mom Kelly, who's a Grimm just like Nick. In most of those episodes, Sgt. Wu would show up with a quip or two about some violent crime in Portland--which he's unaware is Wesen-related--and prove to be the most likable cop character on Grimm. But Wu never had a backstory, until "Mommy Dearest," that is (Wu, who was named after Grace Wu, the head of casting at NBC, never even had a first name before the episode, which revealed it to be Drew, so that means he's Drew Wu--I take it the Grimm writers are fans of Sheng Wang).

Now this backstory for Wu is where "Mommy Dearest" takes on significance, especially during Filipino Heritage Month: as a piece of hour-long American TV that's full of Filipino American characters, it's non-stereotypical and, as someone who wishes Filipinos were better represented on American network TV and were given roles other than mail-order brides or some other subservient horseshit, I view the episode as quite a well-written breakthrough for a Filipino American regular on a TV show. Wu's backstory cleverly involves a certain part of Filipino culture that makes the synergy between Filipino Heritage Month and Halloween especially terrific: monster folklore. 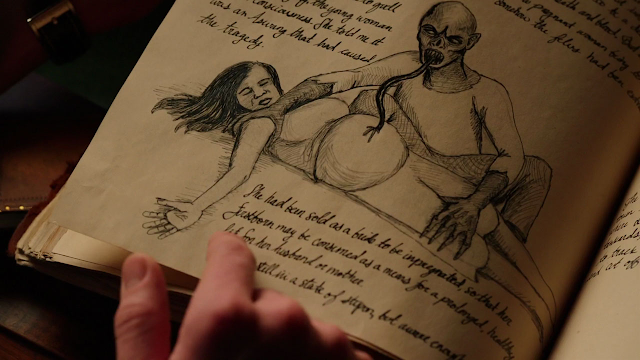 When Wu was a boy, his grandma used to tell him stories about the aswang (pronounced "ass-wong"), a monster from the Philippines with a name that sounds like an Asian American male porn star but is known for an appetite that's not sexy at all: it likes to snack on the unborn babies of pregnant women. As I've said before, Wu is the only regular character on the show who's unaware that Wesen like Aswangs are real, and when his ex-girlfriend Dana (Tess Paras)--who's now married to another friend of his (Alain Uy) and is expecting a baby--is attacked at night by a creature who sounds an awful lot like an Aswang, the assault ignites Wu's suspicions that this childhood monster with the appetite of Fat Bastard from Austin Powers and the tongue of Miley Cyrus is more than just a myth.

"Mommy Dearest" episode writer Brenna Kouf, the daughter of Grimm co-creator Jim Kouf, was assigned to work a Filipino monster into an arc that would sow the seeds for Wu's discovery of Nick's secret life as a Grimm at the end of the third season, and she turned to Lee for Filipino monster myths. He suggested to her and the Grimm writing staff four monsters: the kapre, a tree demon that's fond of punking humans; the duwende, a gnome that's also a prankster; the tikbalang, a shape-shifting horse creature; and the aswang, the most lurid of the four and, of course, the monster the writing staff ultimately went with. Grimm is rarely a disturbing supernatural show--compared to something like The Walking Dead, it's actually one of the least graphic horror shows currently on the air--but when that Aswang tries to go to town on Dana's fetus in the cold open of "Mommy Dearest," man, that has to rank as one of Grimm's most disturbing monster attacks. 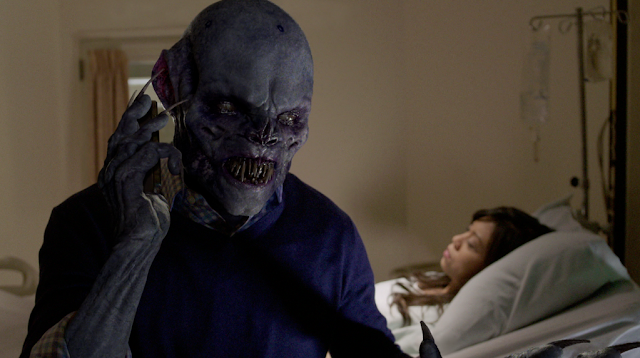 Grimm's aswang episode isn't just great as made-for-TV horror--it's also unexpectedly educational. What's made me enthusiastic about "Mommy Dearest," other than the juicy dramatic material for Lee and his character, is that it introduces Filipino monster folklore to American viewers, as well as Filipino American viewers who are unaware of their own culture's monster myths. In fact, I myself was never exposed to Filipino monster stories until I started reading about them on blogs like my friend Grace-Sonia Melanio's (my parents aren't exactly fans of the horror genre--and I'm not much of a fan of the genre either--so they never tried to give me nightmares with stories about tree demons or foodies with a thing for artisanal amniotic fluid).

Think of that Filipino American kid somewhere who didn't know about Filipino monsters until he or she watched "Mommy Dearest." Thanks to Grimm, that kid gets to learn about his or her culture's rich folklore--and then will probably need therapy later. But that kid is at least learning something about his or her culture. It's interesting that "Mommy Dearest"--which is worth checking out during both Filipino Heritage Month and Halloween season (Grimm isn't streamable on Netflix, but the third-season Blu-rays are available to rent there)--has aired during a year when the broadcast networks have made significant strides in fixing their previously lousy track record with diversity (please be dope, Fresh Off the Boat), and even though it's just a Pinoy battling a Filipino monster, it's progress, man.

Selections from Grimm's first-and-second-season score album will be featured during "Buckets of Score" at 5pm Pacific on October 31 on AFOS.