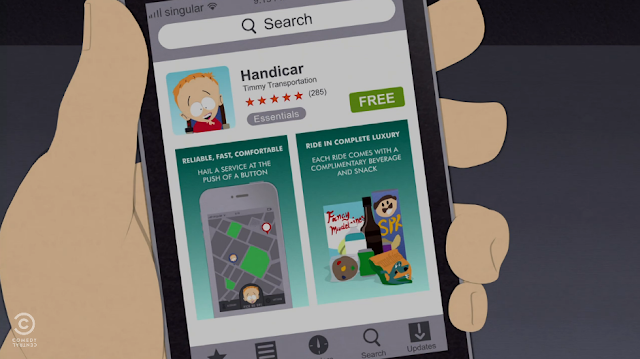 This week's best first-run animated series episodes are both cases where the climactic sequence is stronger than the actual episode itself. While I like how Trey Parker and Matt Stone intertwine the ride-sharing wars (handicapped kid Timmy launches a ride-sharing startup with wheelchairs as the transportation, in order to raise money for the disabled kids' summer camp from "Crippled Summer") with both Elon Musk's unveiling of the Tesla D and Drive director Nicolas Winding Refn's bizarre, frequently parodied Lincoln ads starring Matthew McConaughey, "Handicar" is a step down from last week's solid South Park episode. 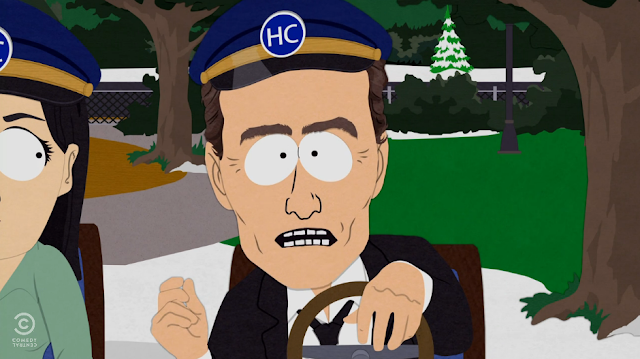 "The Cissy" has become a viral sensation due to both positive feedback from transgender viewers and supporters of their community regarding the sharply written way it handled "transginger" issues and a certain catchy pop song that's performed by the show's version of Lorde, who's been revealed to be Randy Marsh disguised as a teenage girl musician from New Zealand ("I am Lorde/Ya ya ya"). "Handicar" is no "Cissy," and you have to sit through a lot of repetitive comedic misunderstandings between Nathan--the evil kid with Down syndrome who's always seen plotting to ruin the lives of either Timmy or Jimmy, the aspiring stand-up with cerebral palsy--and his incompetent lackey Mimsy in order to get to a brilliant sequence that stages the Silicon Valley rivalry between online ride-sharing companies as the old Hanna-Barbera cartoon Wacky Races.

Nathan and Mimsy are South Park's throwback to '40s and '50s pairings of mismatched Warner Bros. cartoon villains like Rocky and Mugsy (who make a cameo appearance on a poster in Nathan's bedroom), the castaways in "Wackiki Wabbit" and Spike and Chester. While Nathan and Mimsy work better in smaller doses, it's fitting that the duo shows up in an episode that, thanks to South Park's fast turnaround, also manages to work in the September 27 demise of Saturday morning animated TV on the broadcast networks. When Randy and the parents of his son Stan's friends rejoice over the return of Wacky Races--in which the likes of Timmy, Nathan and Mimsy, Lyft, Tesla, Zipcar and McConaughey compete against Dastardly and Muttley and a Penelope Pitstop-ized and farty-due-to-her-Canuckness Neve Campbell to resolve the ride-sharing wars once and for all--the sight of the adults racing to the supermarket for cereal and then gathering around the TV in their pajamas and with cereal bowls in hand clearly reflects Parker and Stone's affection for Saturday morning cartoons. 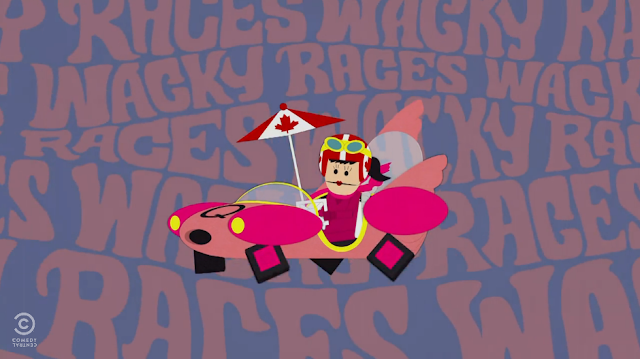 The animators nailed every bit of Hanna-Barbera limited animation that the studio recycled on Wacky Races and countless other '60s and '70s TV cartoons I caught as a kid in the '80s. I laughed out loud when the screen suddenly got covered in those ubiquitous Hanna-Barbera clouds of gray dirt. But the funniest joke in "Handicar" has nothing to do with either cookie-cutter '60s and '70s TV animation or the decline of the taxi industry in the wake of Uber and Lyft. It's a jab at the decline of CNN as a serious news org: an announcer is overheard saying that complete Wacky Races coverage will air on CNN. 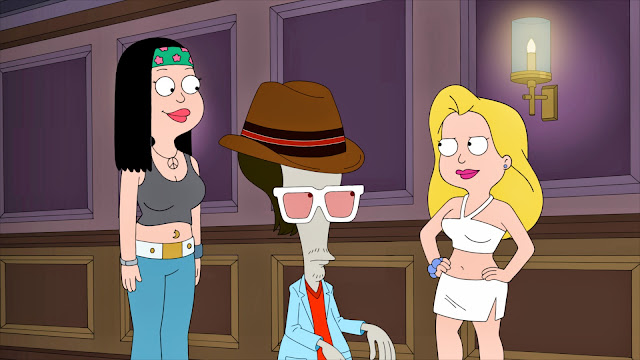 "Blonde Ambition," the first episode of American Dad's exclusive run on its new home network TBS, premiered on TBS' YouTube channel about a week before its cable premiere on October 20 and was made streamable on the YouTube channel for only 48 hours, and while it's lovely to hear profanity go unbleeped on the new, cable-only American Dad (broadcast standards on TBS are looser than Fox's), "Blonde Ambition" is an unremarkable--but not terrible--season premiere. Other than the unbleeped profanity, not much about American Dad has changed since it jumped ship from Fox to TBS.

It's basically the same show it was on Fox: Stan Smith, a competent CIA agent, remains clueless about almost anything that has nothing to do with CIA work or killing people, and when Stan's not trying to teach his dorky teen son Steve how to be manlier, he--or any of the rest of his family, like his not-as-dim wife Francine or their oldest child Hayley--is still getting into mischief with Roger, the show's breakout character and a Paul Lynde-voiced alien con artist who runs a neighborhood bar out of the Smiths' attic. Roger's like a crazy--and sociopathic--uncle or aunt who happens to be from another planet.

American Dad also remains a more satisfying and watchable Seth MacFarlane animated show than Family Guy (although MacFarlane has no involvement in American Dad's writing and his contribution to the show is mainly just voice work as both Stan and Roger). Comedically, American Dad is a tighter ship--it doesn't pause for any of those annoying and pointless cutaway gags that were such a memorable object of ridicule in South Park's "Cartoon Wars" two-parter about Family Guy's inexplicable popularity--and both the espionage side of Stan's job and Roger's scheming and grifting give American Dad an unusual sense of purpose and make it a more plot-driven show than Family Guy (in other words, there's no time for the random five-minute chicken fights that Family Guy is famous for).

Also, while Family Guy plays to the lowest common denominator (i.e., a shitload of hacky race jokes and the poorly received rape joke during Bart and Stewie's phone pranks on Moe in "The Simpsons Guy"), American Dad has been a little more experimental in its humor. For instance, it once took a story about Stan's daddy issues and presented it as a serious stage play in the style of August: Osage County, so that meant the Smiths' living room and basement were sets on a stage, off-screen audience members could be heard coughing or gasping like during any other typical play you see in a theater and semi-regular cast member Patrick Stewart appeared as himself in live-action wraparound hosting segments to class up the joint (but a twisted version of the classy and polite Stewart we know and love--just like Avery Bullock, Stewart's perverted CIA boss character on the show--presided over the evening and barely concealed his boredom with the one-episode experiment). 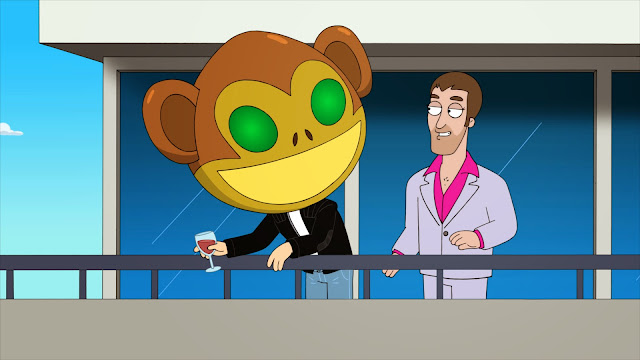 None of American Dad's episodes during its final season on Fox have equaled the hilarity and weirdness of 2009's post-apocalyptic "Rapture's Delight," my favorite American Dad episode (although any episode where Scott Grimes, who voices Steve, gets to show off his unexpectedly top-notch R&B singing skills has come close), and it's unlikely that any of the TBS episodes will equal "Rapture's Delight" either (many American Dad fans attribute the slight dip in quality to the departure of longtime co-showrunner Mike Barker last season). But what "Blonde Ambition" has going for it, aside from eye candy in the form of a blond and club miniskirt-clad Hayley, are some observant jabs at celebrity environmentalists (Ike Barinholtz from The Mindy Project and The Awesomes provides the voice of DJ Iron Monkey, a hypocritical EDM artist/philanthropist who wears an oversized, Deadmau5-style helmet shaped like a cartoon monkey's head); an amusing dance-off between Francine and Hayley to distract a bouncer (Cedric Yarbrough); and silly nods to the invisible stage prop gimmick from Our Town (another bunch of weird stage play references from American Dad) during Stan and Steve's action-packed but mostly drab subplot about Stan's obsession with buying a dream house he mistakenly thinks is empty. Hayley's ploy to dye her hair blond in order to attract more male philanthropists to help her fund her environmental causes was more enjoyable when Just Shoot Me tried the same thing with Maya and a blond wig for one episode, but hey, at least we got out of it a nicely animated dance sequence from the temporarily blond Hayley and a Hayley-ified Francine at the end. Fran service!
Posted by J. John Aquino at 9:35 AM