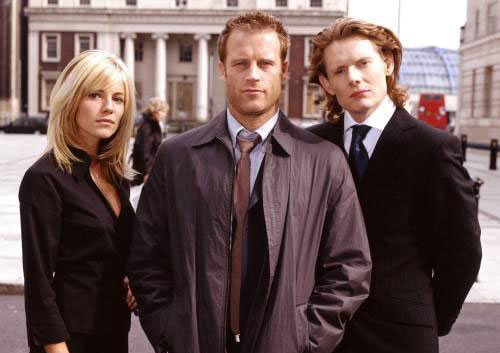 Tonight, prime-time takes another stab at adapting the DC comic Human Target when Fox premieres a much-hyped, Bear McCreary-scored series loosely based on Peter Milligan's Vertigo version, one of my favorite comics during its too-brief run. In a previous TV version of Human Target that was produced by Flash TV series showrunners Danny Bilson and Paul DeMeo, Rick Springfield starred as bodyguard Christopher Chance, who disguised himself as his victimized clients to throw off the bad guys and flew around in a pimpin' stealth bomber/bachelor pad that's the only thing I remember about the show. This time, Jericho co-creator Jon Steinberg is the showrunner, the master-of-disguise gimmick has been ditched, the stealth bomber has been left to rot in a hangar somewhere and Chance is played by Mark Valley, who will always be Keen Eddie to me.

Human Target reunites Valley with Con Air director Simon West, who also worked on the much-missed, Guy Ritchie-esque Keen Eddie, which first aired on Fox in the summer of 2003. Early reviews have said Human Target is less like the gritty Vertigo comic--which put Chance through one hell of a psychological wringer by having him suffer from an identity crisis--and more along the lines of lighter fare like The A-Team, MacGyver and Keen Eddie. 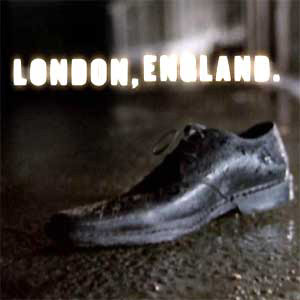 I doubt the new show will be as offbeat or raunchy as Keen Eddie, which premiered (and then died) a few months before Janet Jackson's Super Bowl XXXVIII halftime wardrobe malfunction caused the major networks to overreact and kill some of the fun out of prime-time by overpolicing their raunchier shows. There are certain storylines and bits of dialogue during Keen Eddie that teleplay writers probably can't get away with in today's post-Janetgate prime-time landscape--they're more likely to be able to get away with them on FX. Cable was where Keen Eddie belonged.

In fact, cable was where most of Keen Eddie's cult following first discovered the series. After Fox's top exec at the time--who was as impatient with Keen Eddie as the shit-for-brains NBC execs have been with The Tonight Show with Conan O'Brien--defied the wishes of other Fox execs who loved Keen Eddie and abruptly cancelled it, Bravo picked it up and debuted its unaired episodes.

The series, which last popped up on Sleuth a couple of years ago, is a lost comedic gem from creator J.H. Wyman, who currently co-produces Fringe, where Valley was briefly a regular before he moved on to Human Target. The Desert Storm vet-turned-actor was terrific as NYPD detective Eddie Arlette, who travels to London to track down an elusive drug dealer and winds up joining Scotland Yard. Eddie doesn't quite find his drug dealer (Crockett and Tubbs had far better luck with their nemesis Calderon on Miami Vice), but the fish-out-of-water falls in love with the city and takes a liking to both the British crooks he locks up (they're more like the not-so-dangerous oddball criminals from Barney Miller than the mustachio-twirling villains from Miami Vice) and his hot but snooty and argumentative flatmate Fiona Bickerton (a then-unknown Sienna Miller). The series was a love letter to London, where it was filmed on location on what was clearly a ginormous budget. Wyman's creation was too foreign, anarchic and weird for mainstream America (it wasn't dour and moralistic enough for them--the original CSI, the #1 prime-time hit that year, was more up their conservative-leaning, bodybag-filled alley). But it won the hearts of some TV critics (Marvin Kitman called it "a show that could have started something new, like how Miami Vice took police shows out of L.A.") and whoever were the three or four viewers who watched it on Fox. I was one of them. 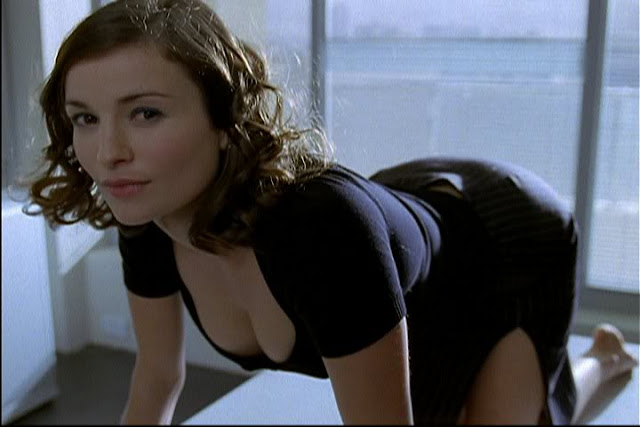 Eddie is a roguish, down-on-his-luck crime show hero in the mold of Jim Rockford and Black Tie Affair's Dave Brodsky. If Rockford's Achilles heel was having knuckles made of Kleenex, Eddie's Achilles heel is thinking with his boner too much--one reason why this show wouldn't fly on prime-time today. Eddie's crush on his gorgeous informant, the mysterious gangster's moll who tricks him and the NYPD into busting down the wrong door, is the whole reason for his banishment to London. The series' most enjoyable running joke involves Carol (Rachael Buckley, who's even hotter than Miller but seems to have disappeared from the face of the earth), a Scotland Yard secretary Eddie nicknames "Miss Moneypenny," and the never-answered mystery over whether her flirtatious exchanges with Eddie about her tastes for crotchless panties or being on all fours are real or the figment of Eddie's oversexed imagination. But Eddie's a prude in comparison to his floppy-haired partner Monty Pippin (Julian Rhind-Tutt), whose off-duty sexcapades make Jimmy McNulty from The Wire look like a monk (even though because this isn't HBO, we never see Monty in the middle of one of his swingers club orgies).

Another highlight of Keen Eddie is its awesome, pitch-perfect soundtrack. The pilot episode underscored a drug bust sequence with the Archies' "Sugar Sugar"--an early indication that Keen Eddie was no ordinary cop show. For the carelessly compiled DVD release, which should be avoided at all costs, Paramount Home Entertainment removed many of the songs that helped make Keen Eddie such a memorable show, due to clearance fees Paramount refused to pony up for ("Keeping Up Appearances," an episode in which Eddie inherits Jimi Hendrix's Bentley, is utter shit without "Crosstown Traffic"). But the studio didn't lay a finger on the songs in the reruns, so whenever Keen Eddie turns up on cable, fire up the DVR.

Because of the arrival of Valley's first star vehicle since Keen Eddie, I'll soon be adding to the Fistful of Soundtracks channel's "F Zone" playlist some of the tunes that were cut out of the Keen Eddie DVDs: Madness' "One Step Beyond," New Order's "Crystal" and of course, "Crosstown Traffic."