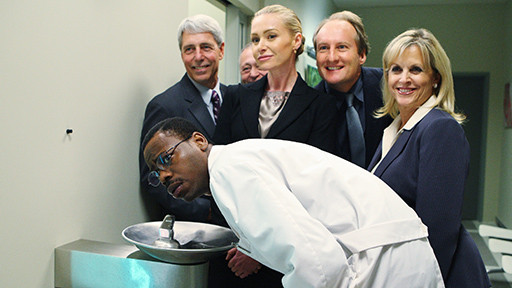 I know Better Off Ted's not officially cancelled yet, but the fact that ABC burnt off an episode on New Year's Day and is burning off two more eps on the same night--this Tuesday night, to be exact--indicates the hilarious but little-watched series is being taken out back and shot.

Ted, which is narrated by the title character (Jay Harrington), who's like a kinder, gentler, health-conscious Don Draper, is about the research and development department Ted runs at the morally dubious conglomerate Veridian Dynamics. His neurotic scientist underlings Phil (Jonathan Slavin) and Lem (Malcolm Barrett) toil over inventions like vegetables full of anti-depressants, "weaponized pumpkins," "Hushaboom technology" ("War just keeps getting better") and a motion-detection system that throws Ted and his team into panic mode when they discover that its sensors are unable to recognize black people (an eerie foretelling of HP's racist face-tracking software!).

It took me a while to warm up to showrunner Victor Fresco's latest corporate satire--his signature creation is another corporate satire, Andy Richter Controls the Universe, which also co-starred Slavin--but now I consider Ted one of the most consistently funny single-camera sitcoms currently on prime-time. I can always count on Ted to contain five or six strange and absurdist lines that crack me up (the sexual harassment-themed ep that ABC burnt off on New Year's, "The Great Repression," rattled off way more than five or six and was endlessly quotable, with great lines like a reference to a lengthy hug as a "Midwestern handshake"). Community, Parks and Recreation, The Office, 30 Rock, The Venture Bros., How I Met Your Mother and even Modern Family--which I like despite its occasionally sappy concluding voiceovers--have the same batting average as Ted's.

I've never seen former Arrested Development ditz Portia de Rossi play an ice queen before. (Did she play one on Ally McBeal? I wouldn't know. I'm a guy. I wasn't into Ally McBeal.) She pulls off the ice-queen act incredibly well as Ted's boss Veronica, whose callousness towards lesser human beings like her little sister never fails to amuse ("When my little sister came along, I was very jealous. That feeling never went away, even when she was older and I put testosterone in her orange juice, so she became hairy and unlovable and got kicked off the gymnastics team for doping"). Mrs. DeGeneres is the scene-stealing MVP on this show, much like Alec Baldwin on 30 Rock and William Shatner on Boston Legal, although on some weeks, she's been edged out by Andrea Anders as Linda the eccentric product tester. 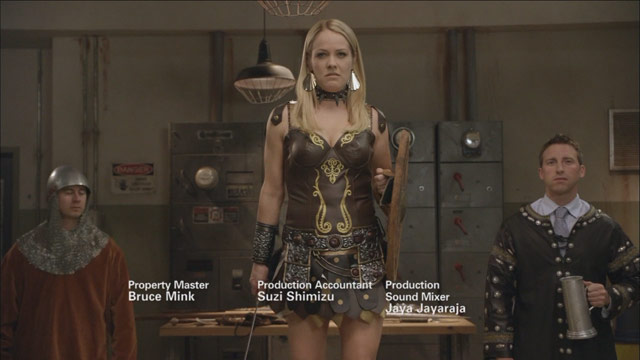 When Ted premiered last spring, I felt at first like Fresco was just rehashing material from Andy Richter. But then I got onboard when I realized that "Whoa, Veridian's a pretty evil corporation, and the show's not going to sugarcoat Veridian's evilness or make this workplace one big happy surrogate family" and that the main female love interest, who's often boringly written on these sitcoms, is kind of nutso--a nice change of pace from "idealized, humorless girl-next-door" or "shrill, stick-in-the-mud female foil." Anders is a riot as Linda, a misfit and audience surrogate who hates the corporate world and continually finds ways to rebel against it, whether it's secretly writing a children's book that she hopes will be her ticket out of Veridian or responding to the craziness of Veridian by being even crazier than the company itself. Linda is the source of many of the show's most absurdist lines, like her random nickname for Ted at the beginning of the aforementioned kids' book ep ("Bloopity-bloo"). She's like a Midwestern working class version of the original Manic Pixie Dream Girl, Katharine Hepburn in Bringing Up Baby, except more attractive (peep the Xena outfit) and not as scatterbrained. This enjoyably written character and the loony, "Hushaboom technology"-worshiping universe that surrounds her and the level-headed Ted are some of the many reasons why I already miss Better Off Ted. Thanks a lot, According to Jim-loving Nielsen family dipshits.
Posted by J. John Aquino at 12:30 PM