Mighty love: A look back at Ralph Bakshi's adventurous and long-lost Terrytoons reboot, now on DVD 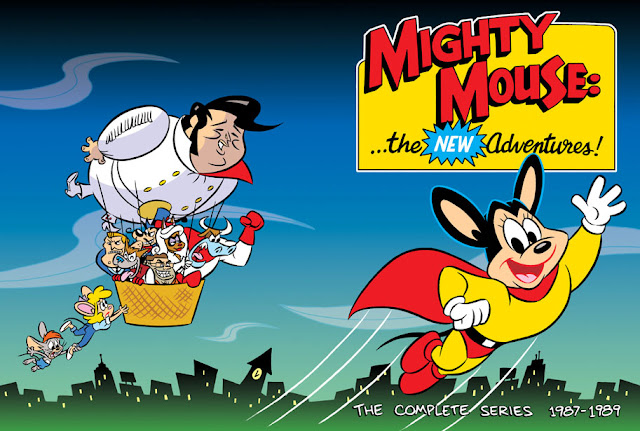 This is a revised version of a June 5, 2009 post--updated to include mentions of the Mighty Mouse: The New Adventures complete series DVD that came out yesterday.

I never thought I'd see the day. Ralph Bakshi and John Kricfalusi's hilarious late '80s Mighty Mouse: The New Adventures reboot of Terrytoons' opera-singing rodent superhero finally got an extras-filled DVD release from CBS/Paramount, delighting animation fans and '80s kids like me who, back in '87 or '88, thought, "There's gotta be a better cartoon than Transformers, G.I. Joe and all the other lamer ones starring toys," and then caught Mighty Mouse: TNA one Saturday morning and said, "Hey man, we just found it." 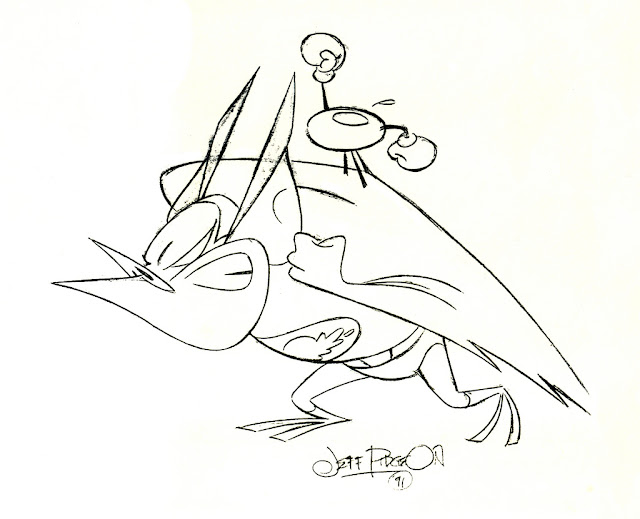 The amusingly over-the-top and off-kilter Bakshi Animation fanfare that opened every 11-minute Mighty Mouse: TNA story signaled this was not another saccharine and sanctimonious cartoon kingdom like the ones inhabited by the Care Bears, Teddy Ruxpin, My Little Pony and the Little Clowns of Happytown. The Bakshi/John K. Mighty Mouse brought back some characters from the Terrytoons shorts (Pearl Pureheart, a less prominent Oil Can Harry) and introduced several new ones, like MM's lonely orphan buddy Scrappy Mouse, a bald villain named Petey Pate, the Batman spoof Bat-Bat--a precursor to both the Tick and Die Fledermaus--and the Cow, Bat-Bat's bovine nemesis. 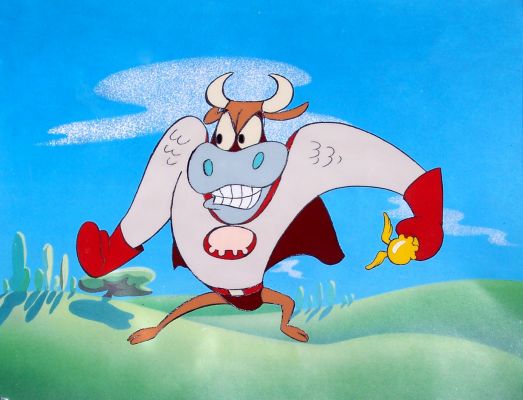 The show also ditched the obnoxious opera singing from the old shorts and gave MM a secret identity for the first time. When MM wasn't busy rescuing Pearl, Scrappy or the other citizens of Mouseville, he disguised himself as a plain-voiced construction worker named Mike the Mouse, a new conceit that actually made MM a more relatable character. In the show's much more anarchic and absurdist second season, the writers apparently lost interest in the Mike persona and had MM appear as his caped self all the time, even when he got married to Pearl at a ceremony that was attended by all the other Terrytoons characters.

Nineties cartoons like Tiny Toon Adventures and Animaniacs jumpstarted the whole meta-toon trend of poking fun at rival cartoons. But Mighty Mouse: TNA actually went meta years before--and with funnier and wilder results--in the classic "Don't Touch That Dial" episode, which launched an unprecedented attack on cookie-cutter '80s cartoons and viewers' short attention spans. The show's writers and animators admired the '40s and '50s Looney Tunes shorts (the Termite Terrace crew was in their comedic prime during those decades, but several of their shorts were also pretty racist-ass, to borrow a word from a recent tweet by Geo of Blue Scholars about Looney Tunes marathons). Throughout the series run, the Mighty Mouse: TNA staff succeeded in recapturing the irreverent spirit of those '40s and '50s cartoons, and in "Don't Touch That Dial" and an earlier ep, "Mighty's Benefit Plan," they couldn't resist expressing their hatred for the shabby state of mainstream animation at the time.

In the first-season ep "Mighty's Benefit Plan," the writers skewered one particular '80s cartoon, NBC's Alvin and the Chipmunks revival. They reimagined the Chipmunks as "Elwy and the Tree Weasels" (the band's biggest hit was called "Twitch and Writhe"), and in a series of gags they somehow Jedi mind-tricked CBS censors into ignoring, they turned David Seville into a disgusting-looking, Cheerios-craving pseudo-pedophile--an eerie foretelling of creepy teen pop Svengalis like Lou Pearlman and Joe Simpson.

In season two, instead of targeting just one show, the writers decided to go after a whole bunch of shows with "Don't Touch That Dial." The ep follows a Sgt. Bilko's Cereal-eating, diaper-clad kid viewer as he channel-surfs after MM's latest adventure bores him. Evicted from his own show by the impatient kid's remote, MM gets zapped into lame cartoons that resemble The Flintstones, The Jetsons, The Real Ghostbusters, Rocky and Bullwinkle (with Rocky Balboa instead of Rocky the Flying Squirrel) and Scooby-Doo (complete with canned laughter and a Scrappy-Doo-esque sidekick named "Mr. E," a mash-up of Mr. T and Ed Sullivan who tells MM to get away from his "really big shoe" and stop taunting his "ethnically mixed buddies"). Long before the writers of The Simpsons, Futurama, Arrested Development and 30 Rock were inserting gags that viewers have to freeze-frame, "Don't Touch That Dial" snuck in a great split-second shot of MM getting zapped into a nameless cartoon starring a mash-up of Popeye and a Smurf ("Popeye Smurf").

Not everything in Mighty Mouse: TNA worked. Scrappy, voiced by the late Dana Hill, the Patrick Troughton of Audrey Griswolds, was an annoying audience surrogate who became even more annoying when a cost-cutting Bakshi would string together clips of old Terrytoons shorts and have an offscreen Scrappy snark at the footage for the entire 11-minute segment. Mighty Mouse invented MST3King about a year before MST3K did! (When he was asked in a 1988 interview about the 11-minute montages of old Terrytoons clips, John K. said, "Why waste money on those things? Nobody's going to watch them anyway.") Though these segments weren't very funny--and listening to Scrappy's voice for 11 minutes straight is like being treated to a concerto by the Nails on Chalkboards Philharmonic Orchestra--they showed how much of an improvement the Bakshi/John K. reboot was over the original MM cartoons, which were rather sucky. No wonder the show's writers and animators turned to Looney Tunes instead of Terrytoons for comedic inspiration. 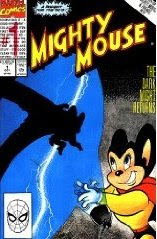 It's a shame this little-seen show has been remembered mostly for the uproar caused by the religious right--they thought they saw MM snort coke from a flower--and not often enough for moments like the ep that pitted MM against a giant, evil and nameless parade balloon that was clearly Pee-wee Herman (a funny reference to another CBS Saturday morning show at the time), the Elwy show and "Don't Touch That Dial," the most entertaining 11 minutes of small-screen animation from the '80s. Though it lasted only two seasons, Mighty Mouse: TNA was popular enough to spawn an early '90s Marvel comic that brought Bat-Bat, his sidekick Tick the Bug Wonder, the Cow and the show's other new characters to the funny pages.

For a while, a Mighty Mouse: TNA DVD seemed unlikely because according to Jeffrey Pidgeon, an artist who worked on the show, "the rights are owned by five different people who don't exactly like each other." I don't know who sorted out the legal mess, but I like to think a mouse in yellow tights was somehow involved.
Posted by J. John Aquino at 12:35 PM