WEB100 will be the last AFOS episode in the current format 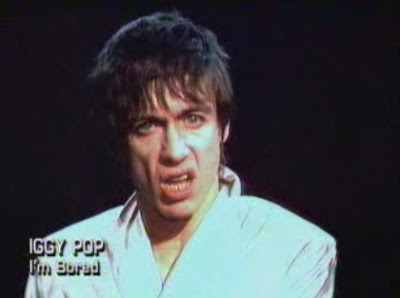 I've decided to end A Fistful of Soundtracks: The Series after producing and hosting 100 episodes for the AFOS channel since January 2003.

Yep, I'm cancelling my own show rather than letting the bastards who run... Oh, wait a minute, I'm the bastard who runs the channel. All by myself. Never mind.

This doesn't mean I'm going away for good. It just means I'll no longer be doing shows under the AFOS: The Series title and format. My voice will still be heard on the channel and I'll continue to be "announcing song titles and making cracks, even if [it] is pre-recorded!," as one listener said to me about my voice in an e-mail a few years ago. (I'll still stream the earlier eps too. Ep WEB63, which is called "Feel the City Breakin'," is the earliest ep that doesn't make me cringe when I play it back.)

The time has come to switch to a new format for my on-air self, like the less constricting and more new releases-oriented "AFOS A-Go-Go" format I experimented with in September and November. I should have given the program a name change a long time ago. Having both the program and the channel share the same A Fistful of Soundtracks name confuses listeners who appear to be under the assumption that AFOS is a 24-hour program as opposed to a 24-hour channel. (I originally conceived AFOS as an audio archive of continuously looped episodes from my program's terrestrial radio years. But I found myself going in another direction, and that was to diversify the programming--without veering too far off from the channel's film/TV music format--and make AFOS sound more like an actual radio station, hence my interspersing of themed blocks like "The F Zone" and "Soda and Pie" with newly recorded eps of AFOS: The Series.)

In each AFOS ep, all the film or TV score tracks are connected by a certain theme, like most recently, Batman villains or monster movies. I've gotten tired of doing that one-theme-per-ep format. Writing the copy for each of these themed eps takes me forever to do. I often get hit with writer's block. Writing copy for a show in which the tracks don't have a unifying theme--like during "A-Go-Go"--is much easier for me.

Plus I'm not a creature of habit. I get bored with routine after awhile. I became bored with my last job after a couple of years (but I stayed with it for a few more years because the money was good). As for my job before that one, I got bored with it after about half a year (plus having to type your newspaper articles inside an office building that lacks air conditioning kind of puts a damper on your morale).

In the case of AFOS: The Series, which was a way for me to continue doing the same program I used to do on terrestrial radio in the late '90s and early '00s, you could tell when my interest in it started to taper off--when the program went from weekly to monthly to bimonthly to whenever-the-hell-I-feel-like-it-ly.

I've lately been listening to the kickass Scion Radio channels programmed by L.A.'s Root Down club and KCRW's Garth Trinidad. For his channel, GT records about two and a half hours of content and then has them looped over and over again for the entire month.

I'm thinking of switching to a format like the Root Down crew's or GT's, except instead of recording new segments once every month like they do, I'll do it probably every other week or whenever I can find time to get on the mic or whenever I have any space left on my hard drive. Morning Becomes Dyspeptic and the DJ-less "Assorted Fistful," "Soda and Pie," "Chai Noon" and "F Zone" blocks will remain on the AFOS schedule so that listeners won't have to hear so much of my annoying voice (listeners have told me they don't mind my voice, like the person in that aforementioned e-mail, who said, "I've *gasp* ventured into other soundtrack stations. They aren't as fun to listen to as Fistful though... There's something nice about having someone announcing song titles...").

Here's what coming up on AFOS: The Series: Ep WEB99 will flash back to the year 1999 and stream selections from scores to the most memorable films that were released during that standout year for cinema. And then like 100 Bullets, I'm ending it at 100. The final ep under the AFOS: The Series title and format will be a doozy: all 22 official Bond opening title themes in chronological order.

If you frequently listen to the channel, thanks for choosing AFOS.

Oh yeah, and change your links from jim.aquino.com to www.live365.com/stations/sookie_sook or afistfulofsoundtracks.blogspot.com. jim.aquino.com is as dead as Lindsay Lohan's movie career.
Posted by J. John Aquino at 5:00 PM